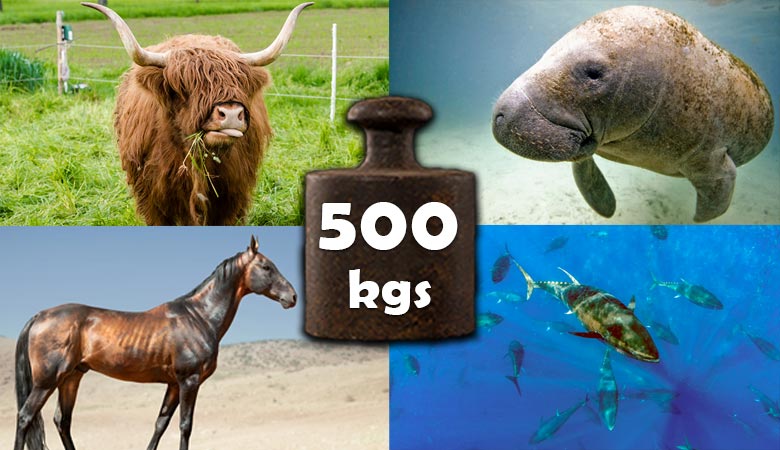 If finding out more about the world’s animals both on land and those living in the seas and oceans is your thing, you won’t need much persuading to keep on reading.

Animal lovers determined to learn more about animals weighing 500 kg,  which is equivalent to half a tonne or 1,102 pounds, are in for a real treat.

Below is a fairly broad list of 10 animals that weigh around 500 kg either when fully grown or at an earlier life stage.

Part of the process of putting this list of animals weighing 500 kg together was to include animals that live on land as well as those with an underwater habitat.

Of course, some of these animals weighing in at about half a tonne live in both aquatic environments as well as terrestrial regions.

Weighing in at a remarkable 440kg to 500kg, the lightweight thoroughbred horse stands at a height of about 15 hands (hands is a unit of measurement used to measure the height of horses).

And even though this magnificent racing animal is quite heavy when it’s fully grown, it’s still incredibly fast and agile for its size and significant weight.

This beautiful beast has evolved in the UK with its usual diet of shrubs and bushes often supplemented with pelleted feed to help boost energy levels and body growth.

The shaggy coat of the American bison, especially in winter where it is heavier and darker in colour, does not resemble its closest cousin’s appearance – North American domestic cattle.

To build up its impressive bulk weight, this species of bison mainly grazes on the grass on prairies. It however has to make do with sagebrush when there isn’t any grass to eat.

With the female of the species growing up to around 500kg in weight, the quite amusing looking Highland cow is not just found in rural regions of Scotland.

Exported all over the world, the Highland cow has a thick double coat which is not only ginger in colour as we might expect – these cows come in various other shades too.

Intrinsic to Scottish culture, these big yet harmless-looking beasts are equipped with relatively light albeit quite large horns.

As these largest members of the deer family can grow from 5ft right up to 6.5ft, there’s no wonder they can weigh around 500kg. Their range is actually from 360kg – 700kg.

Dwelling in regions throughout North America with seasonal snowfall, the moose has a very basic diet to dine on.

Apart from chomping on leaves and bark daily, this hardy animal will often feast on twigs that are found in its natural habitat.

The manatee, which is closely related to the elephant, weighs from around 400kg right up to about 590 kilos once it reaches adulthood.

A fully aquatic creature, this large and slow-moving animal is found in both tropical and subtropical regions of the world.

Primarily herbivores with a diet that includes turtle grass and mangrove leaves, the manatee, in some parts of the world, have been known to consume small fish.

Weighing in between a hefty 400kg and a staggering 907kg, the American crocodile can reach lengths of up to 61 metres in its natural habitat.

With the scientific name of Crocodylus acutus, this no-nonsense predator feasts on a wide range of both land animals and sea-living creatures.

But although they are huge and can weigh about half a tonne or more, their diet consists mainly of small animals such as turtles, snails and crabs.

From around 350kg to a whopping 700kg in weight (male), polar bears have an average height of 4ft to 5ft, 3 inches. (up to shoulder height)

In contrast, female polar bears weigh a fair bit less – getting up to about 450kg in weight when they are fully grown.

Found mostly in the Arctic Circle regions, this tough and quite aggressive animal is the largest of the extant bear species.

Highly prized as a food fish, the Atlantic bluefin tuna can weigh up to a massive 680kg, which is equivalent to 1,500Ibs.

And with this impressive weight range, there’s no real surprise that this species of tuna fish is well sought after by Japanese fishermen specialising in the raw-fish market.

As the largest of the tuna fish species found throughout the globe, the Western Atlantic stock can grow to a staggering 13ft in length, which comes to 4 metres.

Growing as long as 6ft to 9ft and as wide as 3ft to 5ft, this largest in sea turtle species feeds its huge body (300kg-500kg) on a wide range of different sea creatures.

Consuming a massive amount of jellyfish (its favourite meal), the humongous leatherback sea turtle looks rather like a huge floating barrel in its natural habitat.

But surprisingly for a sea turtle, the shell of this species is quite rubbery to the touch – nothing like the hard shells of most other types of sea turtle.

The size that this type of walrus can grow to also varies quite considerably – starting at around 2.3m in length and going up to about 3.1 metres.

With its natural habitat in the Arctic seas, the Pacific walrus is the larger of the two different walrus species (the other being the Atlantic walrus). It diets on clams and mussels as well as small fish and small seals from time to time.