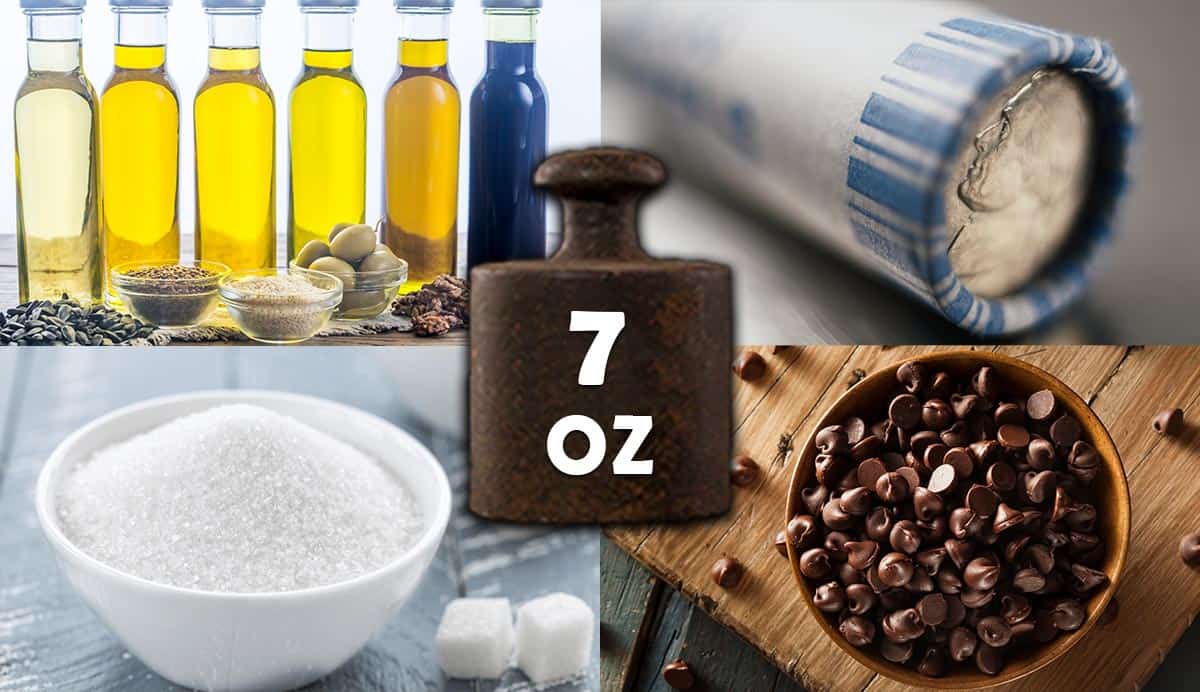 For many, seven ounces may seem like a small measurement, but surprisingly, several everyday items around you weigh around this much. Being around 0.43 pounds, it doesn’t seem like much when you hold it in your hands. I mean, think of a few pencils, dark chocolate, and a few slices of bread to make that oh so yummy sandwich. To give you a gist of some common items around you that weight this much, here is a list of 11 items.

If you are a lover of baked foods like donuts and cookies, you most likely have granulated sugar in your kitchen. Apart from providing natural sweetness, sugar has quite many functions.

It helps baked goods retain moisture and last for a long time and adds color to baked foods. Sugar also acts as a tenderizer whereby it slows down the formation of gluten in wheat flour. While 1 ounce equals 28.5 grams, a cup of granulated sugar weighs 200 grams, the same as 7 ounces.

Softball, a game similar to baseball played with a large ball on the field, was invented in 1887 as an indoor game in Chicago, Illinois, United States. It comprises 9-10 team members just like any other sports game. The game moves faster than baseball. According to sports rules and regulations, a softball should weigh 178-198 grams, about 7 ounces.

Hamsters are rodents but also kept by humans as pets. Among the types of hamsters, the Syrian hamster is the friendliest towards humans. A healthy adult Syrian hamster weighs about 175-225 grams (6.2-7.9 oz.). It slightly exceeds but falls under this category. You can also take your adult hamster to a veterinary clinic to check its weight. If your hamster weighs less or exceeds the normal weight, this might be a sign of a health problem.

Port tarts is a brand of toaster pastries that was introduced in 1964 by Kellogg Company. Being the most popular brand in the United States comes in different flavors- from strawberry to cinnamon varieties. In this case, if you have cinnamon pop-tarts, 4 of them will weigh 200 grams (7 ounces). Get rid of the foil packaging to avoid extra weight.

5. A Roll of Nickels

Drifting away from snacks, get yourself a rock of nickels.  A standard roll of nickels contains 40 coins inside, and it amounts to 2$. Each coin weighs 5 grams; together, they add up to 200 grams (7 ounces). Get new rolls of nickel and take off the paper for accurate measurements. Dirt can also pile around the coins and make it weigh more.

Originally, pencils came into existence where graphite was wrapped in strings then later inserted into hollow wooden sticks. Later on, the modern pencil was invented by Nicholas Conte in 1795.

Pencils are necessary writing devices in a student’s life. They are used to write words and make drawings. One piece of pencil weighs 0.2-0.3 ounces. Therefore six pieces of pencils at hand will weigh between 7.2 -7.8 ounces. These exceed 7 ounces but still fall under the category.

The majority of people have access to water in their homes. Water plays an important role both in human beings and nature. It can dissolve many substances. A normal human brain requires at least 75-90% of water to function properly.

Apart from drinking it to survive, water regulates our body’s temperature, reduces the burden on kidneys by removing waste products, and lubricates your joints. In weight, 1 gram of water equals 0.035 oz. Therefore, 200grams of water will weigh about seven 0unces.

C-cell battery is a standard size of battery used in items such as toys and torches.  Although the density can change, C-cell batteries’ weight does not change; you can use old or new batteries to measure. The weight of one c-cell battery weighs about 67 grams. In this case, 3 of them will weigh 201 grams. While 1 gram equals 0.035 Oz, the three batteries put together will weigh 7 ounces.

Chocolate chips are snacks that are commonly consumed by many people, especially children. They also come in different types, white chocolate, milk chocolate, and dark chocolate. Studies show that eating dark chocolate helps in burning calories and fats in the body.

Whole grains contain fiber and other essential nutrients that are useful to your health. Whole grains contain valuable properties that play a vital part in our diet. Consumption of whole-grain bread will lower the risk of getting colon cancer, lower chronic inflammation, improve blood sugar control, and reduce the risk of developing any diabetes. The size may vary depending on the type of bread.

Vegetable oils are used in different types of cooking, from shallow frying to deep frying. Vegetable oils help make the food tastier, but it can also be dangerous if consumed in high amounts. While cooking, different quantities may be used depending on the amount of food. 1 cup of vegetable oil weighs about 200 grams (7.1) ounces, slightly exceeding 7 ounces but falls within the category.

Not only does knowing how much a particular item weighs helps you, but it’s also a fun activity.   Now you have an idea of what things weigh 7 ounces from the few options discussed above. The next time you go shopping for one of these items, you will probably remember how much they weigh.