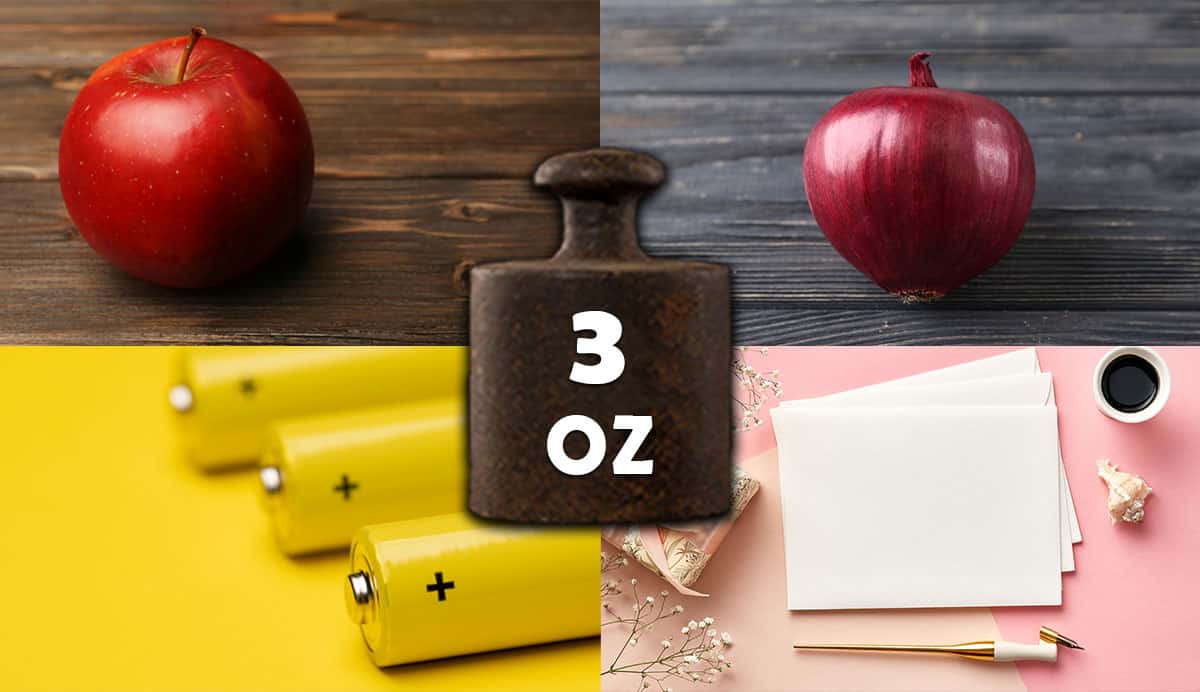 Have you ever wondered if there are items that weigh as little as three ounces? You will be surprised to discover that everyday objects around you are much lighter in weight than you could imagine.

But why should you have an idea of the things that weigh three ounces or are close to that figure? Weight plays a crucial role in making choices of the type of items to buy or use, but sometimes it’s just a matter of knowing a fascinating fact. Below, we provide you a list of such things;

Apples are a favorite fruit for many people. According to the International Trade Centre, apples were ranked as number three among the world’s most loved fruits. As it is, you probably have them in your house and eat them for breakfast, as a snack, or while making apple pies.

They come in various sizes and weights. An extra small apple with a diameter of two and a half inches weighs approximately 3 ounces.

Envelopes are common in offices, schools, at home, and even in churches. You may think that an envelope weighs nothing, but it does have some weight.

That is why when sending mails through the postal service, they will charge for the weight of the mail, among other factors. A standard envelope of 6 or 10 by 9 inches weighs an ounce. So you will need three standard envelopes to give you a weight of 3 ounces.

Onions come in different sizes and are used by many to spice their dishes. A common onion, one that is small in size, weighs about 3 ounces. If you want to measure out something equivalent to 3 ounces and do not have a proper scale, look no further. Just get into your kitchen and take a small-sized onion. There you will have your 3-ounce weight.

4. A quarter cup of honey

Many people use honey as a substitute for sugar in their recipes and meals. It adds a unique flavor to dishes and is a natural sweetener. A quarter cup of honey weighs 85 grams, which is equivalent to 3 ounces. Next time you want to use 3 Oz of honey as an ingredient or sugar substitute, and have no scale to measure it out, use a quarter cup.

A regular size deck of cards, the poker-sized ones of 63 by 88 mm, contains 52 cards. On average, a 52-card deck weighs 88.4 grams, which is approximately 3 ounces.  A funny theory claims that a deck has 52 cards to reflect the number of weeks in a year.

Others claim that the red and black colors represent the day and night while the four suits stand for the four seasons. A fascinating observation is that all the symbols in a 52-card deck add up to 365, which is equivalent to the number of days in a year. Now you know the weight of a deck of cards and the meaning behind the numbers, symbols, and colors.

Pennies issued in the United States from 1982 weigh either 2.5 grams or 3.11 grams. This is equivalent to 0.088 or 0.109 ounces. The pennies are made of copper and zinc. To give you a weight of about 3 ounces, you will need thirty pennies.

This is an ordinary object you can find almost in every household. Movie lovers know them, and if you are one, you might be carrying it along with you. When did you last use them?

It may be a while, but you cannot fail to find one or two in your house. Compact discs are made from a polycarbonate material that is light in weight. A standard disc weighs around one ounce. If you want to know how it feels to weight 3 ounces, three compact discs will give you that weight.

In most homes, the regular battery sizes used for most electronic gadgets are the AA batteries. They come in different voltages, capacities, and discharge features. Being cylindrical, they have a length of 1.99 inches and a diameter of 0.57 inches. A standard AA battery weighs an ounce, so you need three of them to get a feel of 3 ounces.

Paper clips are common in offices and at homes. If you hold one in your hand, you will feel as if it has no weight. A large one weighs approximately I gram. Since an ounce is made up of 28 grams, you will need 54 paper clips to give you 3 ounces. Forget about the regular-sized or small paper clips. Look for those that have a larger size.

When food particles and plague stick on your teeth, you always go dental floss picks to help you clean your teeth and gum line. Naturally, you will feel as if they are weightless, but they do have some weight.

One floss pick weighs 0.1 pounds, which is equivalent to 1.6 Oz. Two picks will weigh 3.2 ounces, which is close to 3 ounces. Next time when you want to move them between your teeth, take two floss picks and have an idea of what a 3-ounce item feels like.

You now have a clue of what 3 Oz is all about. These are just but a few. There are many more items at your disposal whose weight is equal to or close to 3 ounces. If you do some more research, you will surely come up with more items on the list. If not for fun, you can use them as comparison weights whenever you need to measure something.

link to 12 Dog Breeds That Weigh About 50 kg (Kilogram)

A kilogram sounds small, but it is not. If you take a tour of your house, especially in the kitchen, you will discover that many of your foodstuff weighs around one kilogram. Interestingly, some...