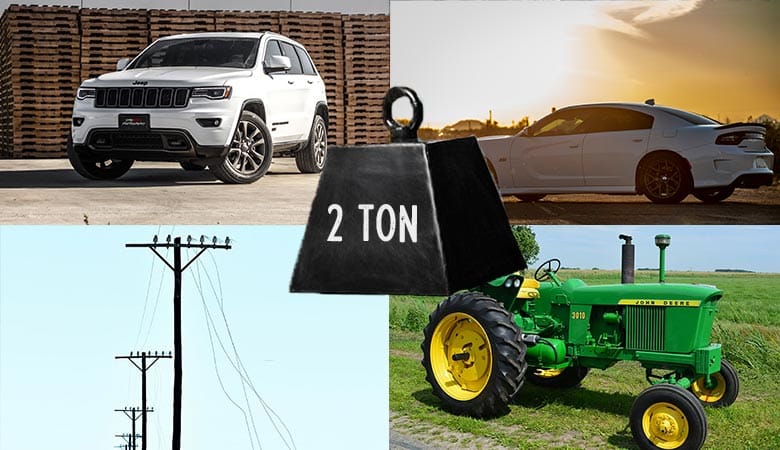 Do you have any idea what weighs two tons? If you need to picture it mentally, this article will help you visualize which things weigh 4000 pounds. To clarify, these are “short tons,” or tons that weigh 2000 pounds.

From animals to money, the size and shape of things that weigh two tons can change quite a lot. Here is a list of what we’ll look at:

The weight of animals and items can vary, but the following will give you a good idea of what weighs two tons. The items that weigh exactly two tons are the U.S. money denominations.

The animal kingdom is vast and narrowing it down to a few animals means a lot of animals were left out. Not to worry, these animals all level the scales at 4000 pounds, giving you a variety of animals to give you a picture of two tons of wildlife.

The white rhino is actually grey and is one of the oldest land mammals on earth. These rhinos have two horns on the end of their nose, and adult males can weigh in at 4000 pounds or 2 tons.

While technically a buffalo is called a bison, that doesn’t change the fact that adult bulls weigh in at about 1 ton (2000 pounds), so we would need two of these big boys to reach our target of 2 tons. These pasture-fed animals can run up to 40 miles per hour and can live between 20 and 25 years.

How cute would 20 baby elephants be? Very cute, but very heavy, around 2 tons to be exact! After a pregnancy of 22 months, female African elephants give birth to babies that weigh 200 pounds and are three feet tall. That’s a big baby!

Standard passenger vehicles are on the smaller end of the vehicle size-weight spectrum, but we’ve come up with a few that you may be familiar with. These common vehicles will give you a good idea of what two tons look like if measured in cars.

One of the smallest commercially-sold passenger vehicles out there is the Smart Car. A 2016 Smart For two weighs just under 1 ton or 1,984 pounds! Two of these cars would weigh just shy of two tons.

The Dodge Charger is one of the heavier cars on the market. With a base weight of 4073 pounds, it weighs in at almost exactly 2 tons.

At almost 2 tons, or 3875 pounds the Jeep Cherokee is one of the heavier small SUVs. This small four-wheel drive sport utility vehicle can tow one ton, or almost half it’s the weight of the vehicle.

Most construction vehicles weigh more than two tons, and many construction materials come as raw materials, which means they come in a variety of weights. Here are two construction items that weigh about two tons.

Hydro and utility poles can come in all sizes, including various lengths and widths, and made of different materials. In this case, four hydro poles made from Douglas Fir that are 30 feet long will weigh approximately 2 tons.

A John Deere 4052M Open Cab Sub-Compact tractor weighs 3770 pounds, or almost 2 tons. This tractor can be used with its loader to move dirt and gravel, grade driveways and clear snow. It’s a common tractor type for a homeowner with a bit of property.

Have you ever wondered how much a ton of money is actually worth? Or said that someone has a ton of money? Depending on the type of currency, two tons of money could be a little… or a whole lot!

Two tones of quarters is still a fair amount of money. With each quarter weighing 5.7 grams, one ound of quarters is made up of 80quarters. It takes 320,000 quarters to weigh two tons, which equals $80,000. Still a substantial sum.

Two tons of money in pennies is not quite as impressive. Pennies weigh 2.5 grams each, and 363,000 pennies are needed to make just one ton. Two tons of pennies are worth $7264. Not much in comparison to two tons of dollar bills.

Now you know what two tons can look like

These 11 items all weigh 2 tons or added together weigh a total of close to 4000 pounds. Hopefully, it gives you a good idea of what two tons of animals, vehicles, construction items and money can weigh.