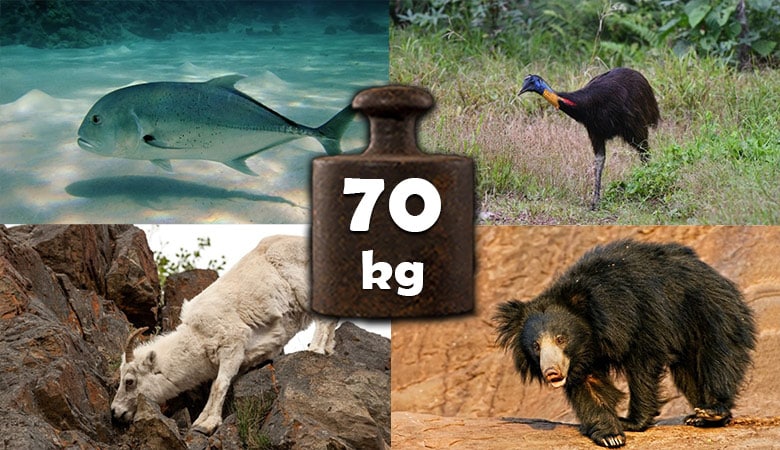 Considering there are around 8.7 million animal species in the world, there’s little wonder that so many of us know very little about the majority of these animals.

Medium-sized creatures that are about 70kg in weight will often have a few different factors contributing to their overall weight. Some animals weighing about 70 kilos are equipped with defence mechanisms like horns, which not only protect them but also add to the animal’s weight.

In some cases, animals with a thicker coat during cooler seasons will weigh a little bit more during winter due to extra fur.

Found throughout Africa and central Iran, this fastest animal on land weighs anything from 27-72kg or 59.52 to around 158.733 pounds.

Getting up to speeds of 128k/ph, the cheetah prefers to chase and eat small to medium-sized animals not exceeding 40kg.

The cheetah has a relatively light body and stands around 67-94cm tall.

Females of this tusked animal usually weigh from 45-75kg when fully grown whereas the males will grow to about 150kg or 330.69Ibs once reaching adulthood.

At shoulder height, the common warthog stands at about 64-85cm with two pairs of tusks found by its mouth – the much shorter and lighter pair at the lower level.

They can be found in grassland, savannah and woodland regions as well as parts of Subsaharan Africa.

Classed as a medium-sized antelope, the impala is native to eastern and southern African countries and feeds on monocots, dicots and various kinds of fruits and forbs.

Their slender horns measure from 45-92cm, which does not add too much to the overall weight of this medium-sized animal.

Although not too far behind, the female grey wolf is lighter than the male at 23 to 55kg compared to 30 to 80kg for the male.

Standing at 66-87cm at the shoulder, this species of wolf often endures long distances in its search for food and water, which helps keep it in such good shape.

Found in North America and parts of Eurasia, the grey wolf can eat up to 20Ibs of meat at any one time – small mammals and birds are also prey for this magnificent beast.

This mountain-dwelling creature weighing up to 70kg or more for the males can be seen roaming the mountain ranges of the European Alps.

The male species of this wild goat is much larger and therefore heavier than the females with a weight of around 17-32kg or about 37 to 70Ibs.

The male alpine ibex has bigger and heavier horns compared to the female with both sexes growing a heavier coat and a woolly undercoat in September.

Growing to a hefty 70kg or around 154 pounds, the Dall sheep measures about 1.4 metres in length when fully grown.

With huge curled horns (males having much bigger horns than the females), the Dall sheep can be seen in northwestern North America.

The start and stop growth cycle of their fairly bulky horns means the animal is regularly at different weights albeit in quite small increments.

Sloth bears generally eat a wide range of fruits as well as ants, termites and other insects found in their natural habitat.

The long shaggy fur on this medium-sized animal keeps it warm during cooler months.

Native to several different countries, the cougar can reach weights of around 100kg from around 53kg for the male and about 29-64kg for the females.

Feeding on deer, racoons and other small animals, the cougar is the 2nd largest cat species living in North America.

They can grow to around 90cm at the shoulder and have a massive head, which adds to this animal’s huge size – it grows to a whopping 9ft in length.

Males of this enormous dog can weigh from 73-100kg whereas the females will often weigh between 54 and 77kg or around 119 to about 169Ibs.

Reaching 91cm in length and having a truly massive head, these bulky dogs are the largest dog breed on the planet (by mass).

The English mastiff is just slightly heavier than the humongous Saint Bernard.

Unlike many other animal species, the males of the northern cassowary are much smaller and lighter compared to the female of the species.

But although getting up to about 70kg or 154.32Ibs in weight, they are still capable of reaching speeds of 50kph when sprinting after prey.

Eating a variety of fruits and small animals, this large and butch-looking flightless bird is easily recognised with wattle and casque on top of its head.

Although the male of the species can weigh up to around 94kg, the females can get as much as four times heavier than the males.

Found throughout the Atlantic Ocean, the blue marlin feeds on a wide range of organisms at the surface of the water.

The adults of this large fish are hunted by killer whales, sharks and humans.

Growing to 70- 80kg in weight, the giant trevally is classed as a large marine fish.