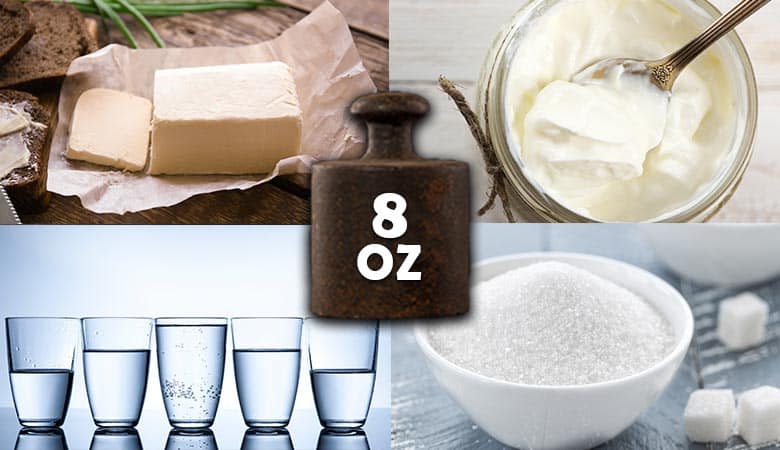 There are two primary ways to measure ingredients when cooking: by weight and by volume. Most bakers will tell you that they would prefer to weigh dry ingredients because this yields an accurate measurement and is more consistent.

Sugar provides sweetness, and it also performs a number of interesting functions in baking. It slows down the formation of gluten in wheat flour so that the more sugar a baked good has, the softer it will be. Sugar also gives color to baked goods. Sugar also helps baked goods retain moisture which keeps it fresher longer.

White granulated sugar is the most common form of sugar and it’s what most people will use most of the time in their homes. This is the go-to-sugar for everything from baking and desserts to sauce-making.

Shortening is any fat that is solid at room temperature and used in baking, this includes lard, margarine, and hydrogenated vegetable oils. It’s also a cook’s best tool for imparting richness and flavor in their food.

Butter is a fat that is made from cream that’s been churned into a solid state. It’s versatile, reliable and can add flavor to any dish. Butter is around 80 percent fat; the rest is water and milk solids.

Shortening refers to all fat and oils. The oils are hydrogenated, so they stay semisolid at room temperature. It’s 100 percent fat and shouldn’t be used interchangeably with butter.

Vegetable oils are oils extracted from seeds, and may refer to vegetable fats which are liquid at room temperature and used for cooking.

Cooking with water is simple, but not understanding water cooking terms can be the difference between a nicely prepared dish and a ruined one. Some common cooking terms when it comes to using water includes: boiling; simmering and poaching; parboiling and blanching; reducing; and steaming.

Whether poured over a bowl of fresh strawberries or added to a sauce, cream is one of the most delicious treats and is great when added to any dish.

Milk is commonly used as a beverage but is also an ingredient for a variety of recipes like cakes, bread, cookies, sauce, and pasta.

Buttermilk is a fermented milk product that was originally produced from the residual liquid that is left behind from churned butter that comes from cultured or fermented cream.

Buttermilk has less fat than milk, and is used in a variety of recipes like pancakes, cakes, biscuits, and cornbread. Buttermilk can also be consumed as a beverage but has a sour and acidic taste.

Sour cream has a fat content of 18 percent and cannot be whipped. Sour cream is used in soups, sauces and dressings, casseroles and cakes or served on vegetables.

Half and half is a mixture of half cream and half milk, and is usually used in coffee. However, it can be used in place of whipping (heavy) cream in many recipes for less fat cooking and may replace whole homogenized milk in some recipes for a fuller, richer flavor.

Heavy cream has the highest amount of milk fat and can be used as a whipping cream. It can be whipped, churned into ice cream or added to sauces and soups.

Weight measurements allow for the most precise measurements in baking or preparing meals. Once you’ve settled on a recipe you like, it’s very easy to scale the recipe up or down and the result will be the same.

Try making a recipe, calling for any one of these ingredients, with the given measurement (at about 8 ounces), and you’ll be able to identify the ease and consistency in maintaining a great dish regardless of the number of servings.