There are some heavy planes in the world in 2019, and ever since Howard Hughes first conceived of the “Spruce Goose”, engineers have been obsessed with making planes larger, faster, and heavier.

Here is a list of 15 of the world’s heaviest planes by maximum takeoff weight:

It is incredible that some of these monster machines can even get off the ground as much as they weigh, but they do.

Ever since the rise of aviation engineering in the wake of World War II, the United States, Europe, and Russia have been in a head-to-head competition to create the largest flying machines in the world.

This list includes everything from Howard Hughes’ legendary WWII “Spruce Goose” war plane to the Antonov AN-225 Mriya, the single largest plane in the contemporary world.

Read on to find out more about these giant aircraft and the companies that make them. The list goes from lightest to heaviest. 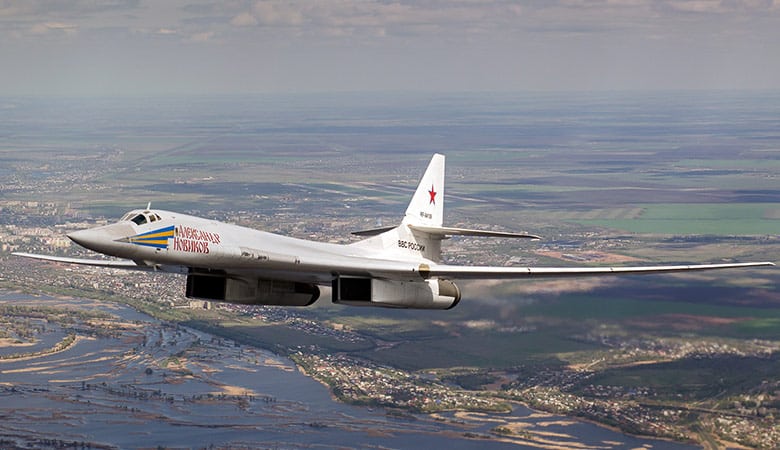 That’s just a little bit less than a blue whale! The White Swan is the largest and heaviest combat aircraft currently in use in the world. 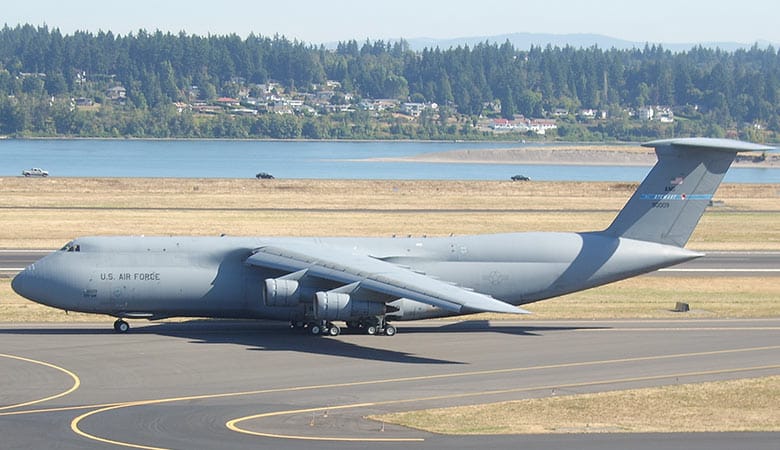 The Lockheed C-5, colloquially known as the “Galaxy”, is a large American military transport aircraft utilized for mass airdrops and is an evolution of the C-141 Starlifter. The C-5 Galaxy is 380,000 pounds, or 190 tons.

Along with supporting the United States Air Force, the Galaxy has also been used in support of the American space program and to assist in humanitarian projects and flying in much-needed supplies for disaster relief. 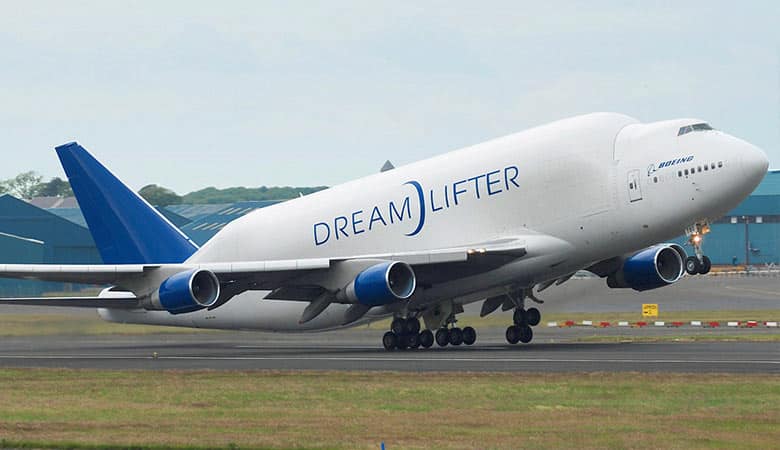 The Dreamlifter used to have the largest cargo hold out of any plane in the world until it was surpassed by the Airbus Beluga XL. This plane is used exclusively to ship Boeing 787 Dreamliner components to assembly plants from their worldwide places of origin. 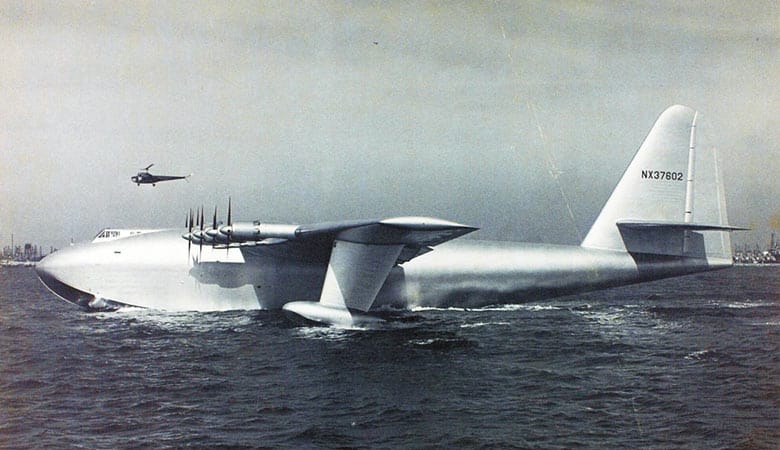 The Hughes H-4 is Howard Hughes infamous “Spruce Goose” or “Flying Boat” and is one of the first super-planes engineered and constructed in the United States. The H-4 was 400,000 pounds, or 200 tons.

The H-4 was built by infamous aviator and test engineer Howard Hughes to be used in troop transport during World War II but was not finished in time. There was only one Spruce Goose ever built, and it only ever flew one time on November 2nd, 1947. 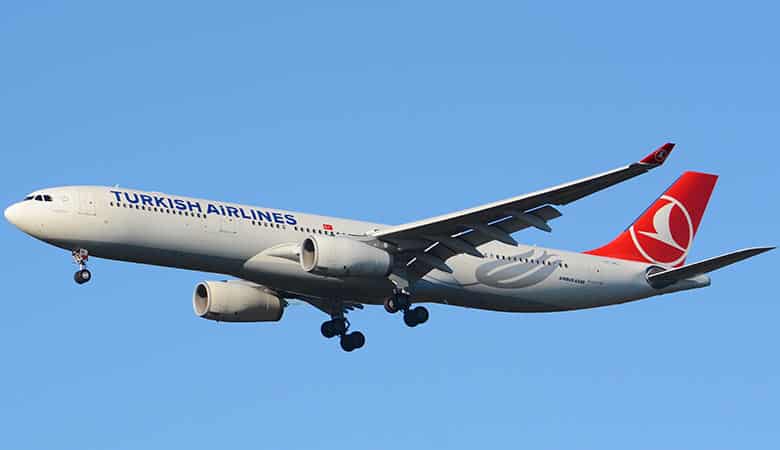 The A330-300 can carry up to 325 passengers and up to 70 tons of cargo. The airliner features fly-by-wire technology as well as a six-display glass cockpit. 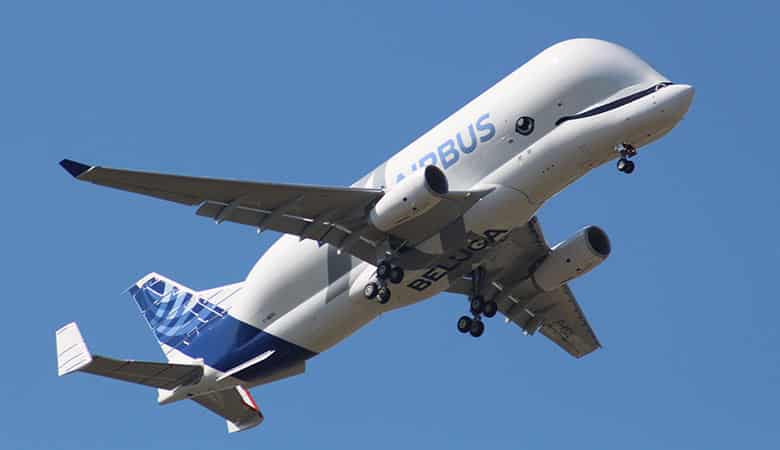 The Beluga XL weighs 500,499 pounds, or 250.2 tons. The Beluga XL is a brand-new plane going into service in 2019 and is designed to airlift and transport supersized plane components, similar to the mission of the Boeing Dreamlifter.

The Beluga XL has more than 30% of the carrying capacity of its predecessor, the Airbus Beluga, and made its first flight on July 18th, 2018. 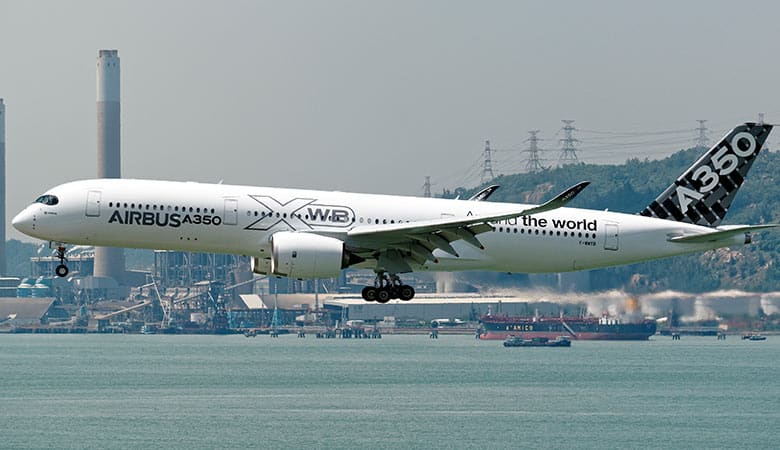 The A350-900 weighs 536,000 pounds, or 268 tons. The A350 is the first Airbus craft to construct both its fuselage and wing structures out of carbon fiber reinforced polymer. 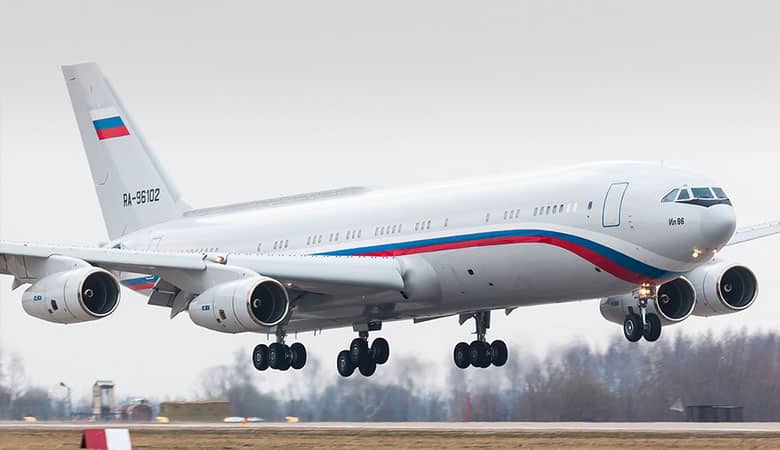 In order to combat Russia’s dependence on the American aerospace industry (Airbus and Boeing), Russia recently announced in 2015 that it would move towards producing updated versions of the IL-96. 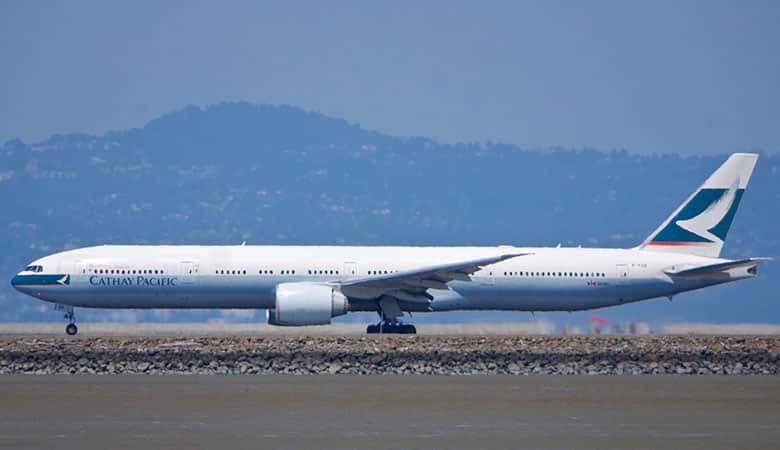 The Triple Seven is Boeing’s first fly-by-wire airliner and also the first commercial aircraft to be completely designed through computer-aided design (CAD). 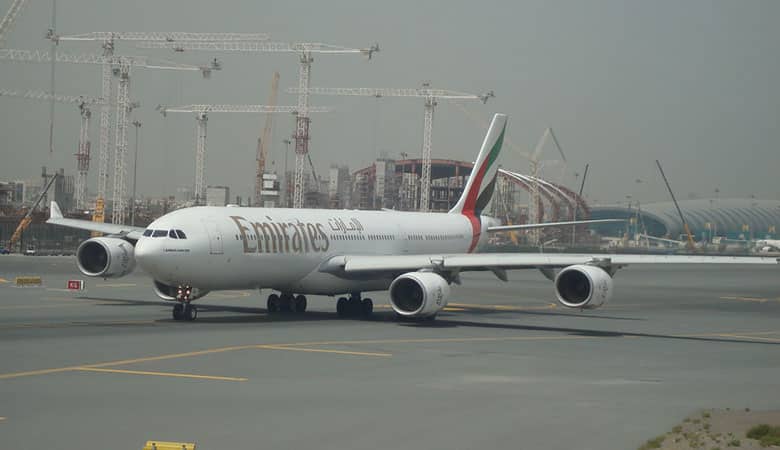 The A340-600 is used mainly on long-haul trans-oceanic routes due to its immunity from ETOPS restrictions inflicted on twinjet aircraft. However, the fuel efficiency of twinjets means that this heavy model is slowly being phased out. 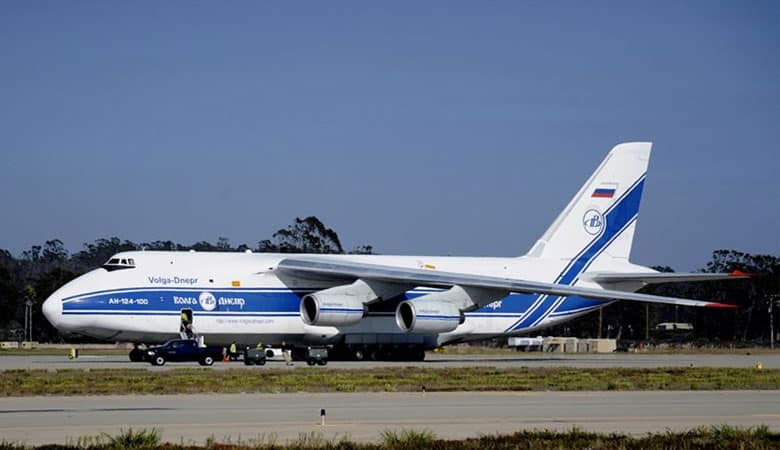 The Condor remains the largest military transport aircraft in current service. Due to renewed tensions between Russia and the Ukraine, joint production of the aircraft has been shelved indefinitely. 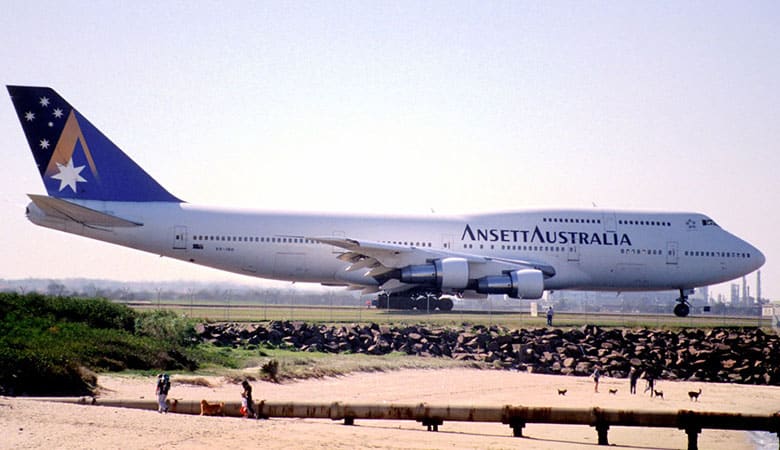 The 747-8 is the third generation of the 747 jetliner and is a wide-body jet airliner and features two iterations for transporting both passengers (747-8I) and for cargo (the 747-8F). 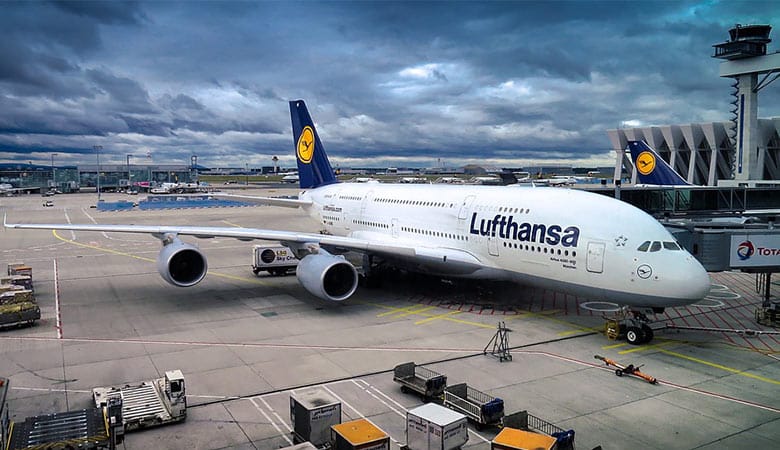 The Airbus 380 weighs 1,234,600 pounds, or 617.3 tons. This airliner was launched in 1990 to challenge the market dominance of the Boeing 747 in facilitating long-distance passenger flights.

The A380 is a double-decked aircraft with a seating capacity of 525 passengers. The most A380s in use are used by the Arabian air service Emirates, with 112 A380s in use. 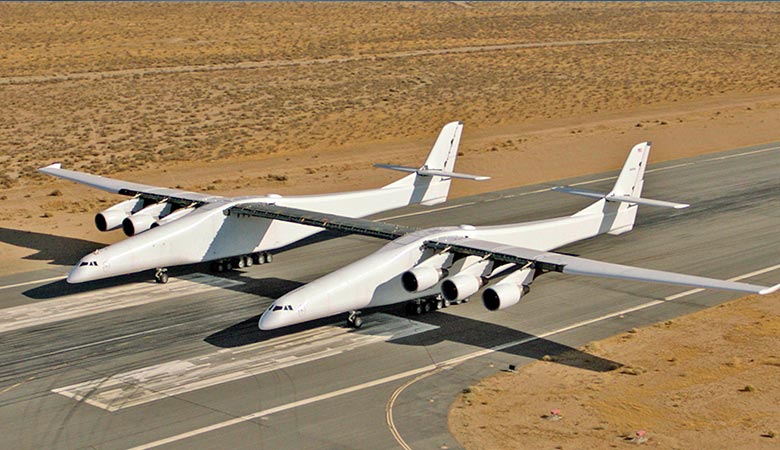 The Scaled Composites Stratolaunch weighs 1,300,000 pounds, or 650 tons, and is designed to carry air-launch-to-orbit rockets in support of the space program. This aircraft is extremely new, with its first flight in 2019.

The Scaled Composites Stratolaunch has the longest wingspan of any plane in the world, at around 400 feet it’s beating out Howard Hughes’ famous H-4 “Spruce Goose” by over 65 feet. 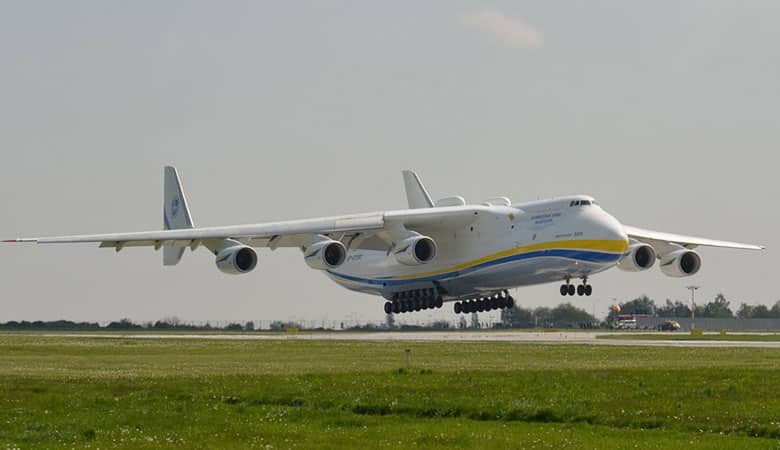 The Antonov AN-225 is colloquially named the Dream and bears the NATO designation of “Cossack”.

Weighing in at a truly massive 1,420,000 pounds (or 710 tons) the Mriya is the single largest aircraft in the world. It is the heaviest aircraft ever built and has the largest wingspan as well at 290 feet across.

This plane holds the world record for air-lifted single item payload at 559,580 pounds and was originally developed for the transport of the Buran spaceplane.

Just watch this amazing landing of the Antonovan AN-225:

And this take off:

Update on the Antonov AN-225

Unfortunately as of february 2022 the plane was destroyed during the Russian invasion of Ukraine. According to CNN and other news channels the plane was parked at an airfield close to Kyiv where it was attacked by the Russian military.