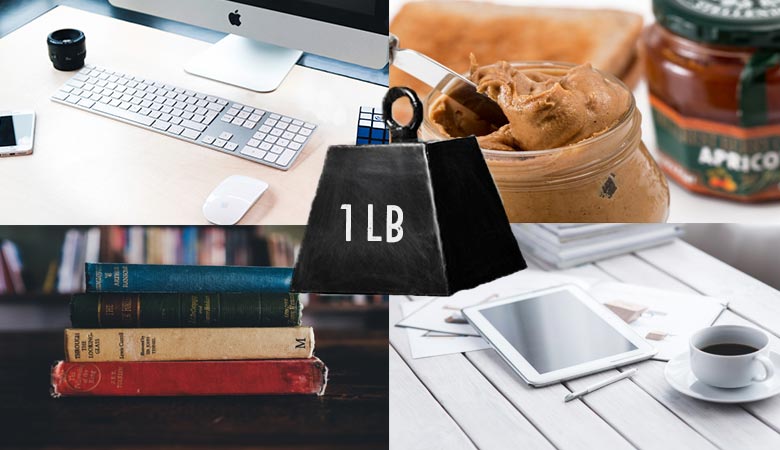 The pound (lb) is a unit of measurement which belongs to the Imperial system. It is used to measure the weight of an object and equals to 0.454 kilograms.

Here is a list of 15 commonplace items that weigh roughly 1 pound. You probably have most of them around the house.

You may be surprised that some of these household items weigh roughly 1 pound. Continue to read in order to find out more information about the items and to discover new ways of using them.

1. A bag of coffee beans

Coffee is undeniably one of the most popular beverages in the world. That’s mainly due to its unique fragrance, beloved taste, and high caffeine content.

A 1 pound bag of coffee beans can have 6,810 grams of caffeine on average. This can last you for 17 days if you drink 400mg of caffeine a day.

Did you know that you can use coffee beans to repel insects, mosquitoes, and other bugs? According to the EPA, ground coffee beans are a safe and effective way to keep pests at bay.

If you have to improvise a home workout and need extra weight, just grab some books and put them in a backpack. This way you can do weighted push-ups, pull-ups, and squats.

Did you know that men were the first to wear shoes with heels?

In the late 10th century, special heels were attached to the boots of men who rode horses. These heels had hooks that connected to the stirrups and minimized the risk of falling.

Normal everyday shoes weigh approximately 1 pound each but most cowboy boots can go up to 4-5 pounds.

4. A jar of peanut butter

It takes approximately 720 peanuts to make a 1 pound jar of peanut butter.

Did you know that you can use peanut butter as a replacement for shaving cream?

The natural oils help the razorblades glide across your skin without cutting it.

People in the US eat 101 pounds or 160 bowls of cereal per person every year.

Did you know that you can make a miniature pinata out of a cereal box? Cut it into the shape you want and keep the opening as the trap door.

The net weight of the beans minus the water is around 40% less than the total amount. However, most common canned beans weigh almost exactly 1 pound.

Interestingly, you can reduce the amount of sodium by 30-40% just by draining and rinsing the beans.

One bushel of wheat weighs approximately 60 pounds. This is enough to make 42 pounds of white flour or 60 pounds of whole wheat flour. This, in turn, can be turned into 45-55 one pound loves of bread.

However, the quality of the towel is measured by GSM (Grams per square meter).

This metric showcases the density of the fabric. Therefore, towels with higher GSM, have higher density and a higher absorption capacity.

Some of the world’s smallest keyboards weigh only 100 – 120 grams or a quarter of a pound.

The world’s smallest tablet weighs only 212 grams or half a pound.

Whereas the world’s largest tablet weighs 2650 grams which is 5.8 pounds.

Did you know that 97% of Americans have a ketchup bottle in their cupboard/fridge?

The ratio of high-quality ketchup is 2:1. Meaning you need 200g of raw tomatoes to make a 100g of ketchup.

Some of the first paintings ever discovered date back to 30,000 years ago. They were made with charcoal, rocks, or clay.

Nowadays, most people have some sort of painting on their home’s wall.

Did you know that very often you can use an old painting as a mirror? Just carefully separate the glass and the canvas and put a black piece of paper in between them.

Nowadays, they are made out of a combination of plastic, metal, and rubber and weigh roughly 1 pound.

Beer is most frequently made out of malt.

You need 1.3 tonnes of barley to make 1 tonne of malt which then is used to make 54 barrels of beer on average.

Did you know that you can use beer bottles as Christmas lights holders, soap dispensers, or bottle vases?

Not all mixing bowls are created equal. Some have a great design with a perfect wall angle where others make the ingredients spill all over.

If the mixing bowl is made out of a thin layer of aluminum or moderately thick plastic it usually weighs around 1 pound.

This list just scratches the surface. There are a plethora of household items that weigh roughly 1 pound. Depending on the house itself and the people living in it, there may be many different obscure or rare items that weigh 1 pound. We compiled a list of the most common ones so that everyone can relate to some extent.

Why don’t you try finding something that isn’t a typical household item but still weighs 1 pound?