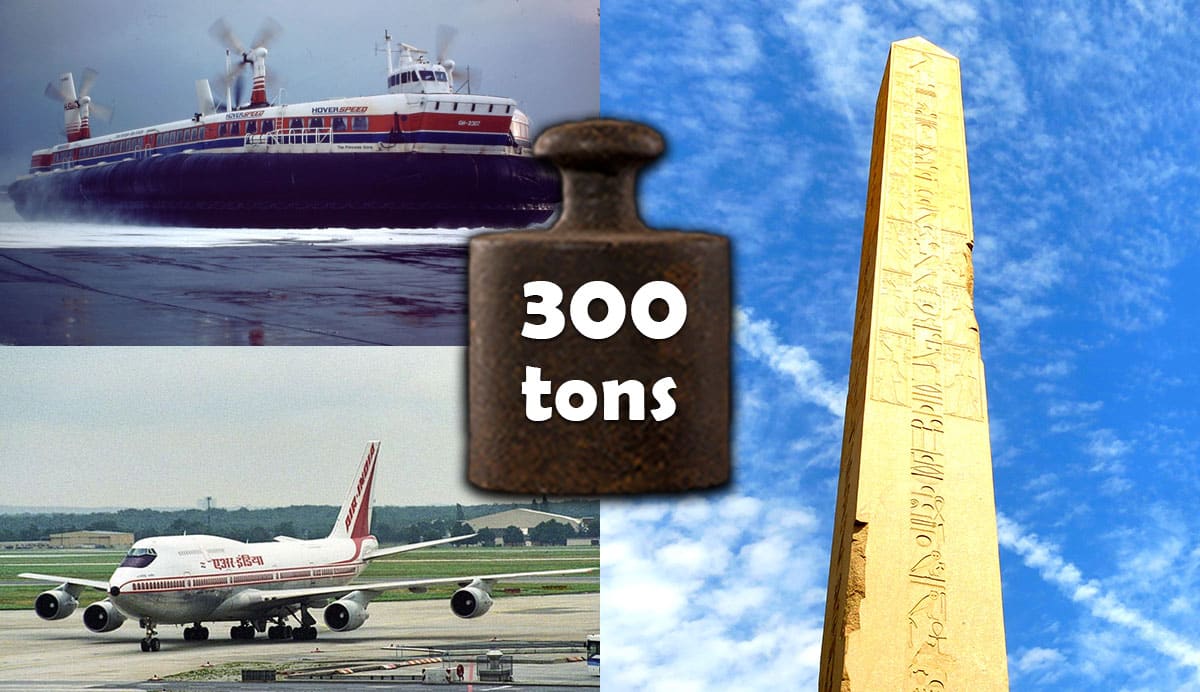 This is a unique weight class as it’s not every day that you stumble across an object that weighs this much.

Nonetheless, we were able to identify a small group of things (four) that weigh around 300 tons.

The Boeing 747 is a large, long-range, wide-body airliner and cargo aircraft manufactured by Boeing Commercial Airplanes in the U.S.

Hovercrafts were developed in the 1960s to carry cars. The largest hovercraft was the SR.N4 which carried cars in its center section with ramps at the bow and stern between England and France.

The SR.N4 was a combined passenger and vehicle-carrying class of hovercraft. It was designed to carry 254 passengers in two cabins and a four-lane automobile bay that held up to 30 cars.

It operated regular services across the English Channel between 1968 – 2000. In response to operator demands, stretched versions of the craft were developed.

In 1976, the SR.N4 was refitted with increased capacity to 418 passengers and 60 cars. The weight was increased to 320 tons. This was the world’s largest hovercraft and continued to be until the Russian Zubr class LCAC hovercraft arrived early in the 21st century.

3. The Obelisk of Hatshepsut

The obelisks of Hatshepsut were one of many amazing architectural pieces created by the Egyptians.

Located in Karnak, Hatshepsut’s obelisk was built to honor specific gods. There is an inscription on the obelisk that says it took 280 days (4 weeks) to create it.

It was built in the year 1457 BC and is the second largest of all the ancient Egyptian obelisks. Made of one single piece of pink granite, it has a height of 28.58 meters and weighs 343 tons.

The Borrowdale was a three-masted, square-rigged merchant ship, launched in 1785, that served as a store ship of the First Fleet, a convoy of 11 ships taking settlers and convicts to establish the first European colony in Australia.

A violent storm developed off the coast of Norfolk in 1789 that damaged many vessels and sank some. The Borrowdale sank off Great Yarmouth, taking all but one man of his crew with her. The ship’s weight was approximately 340 tons.