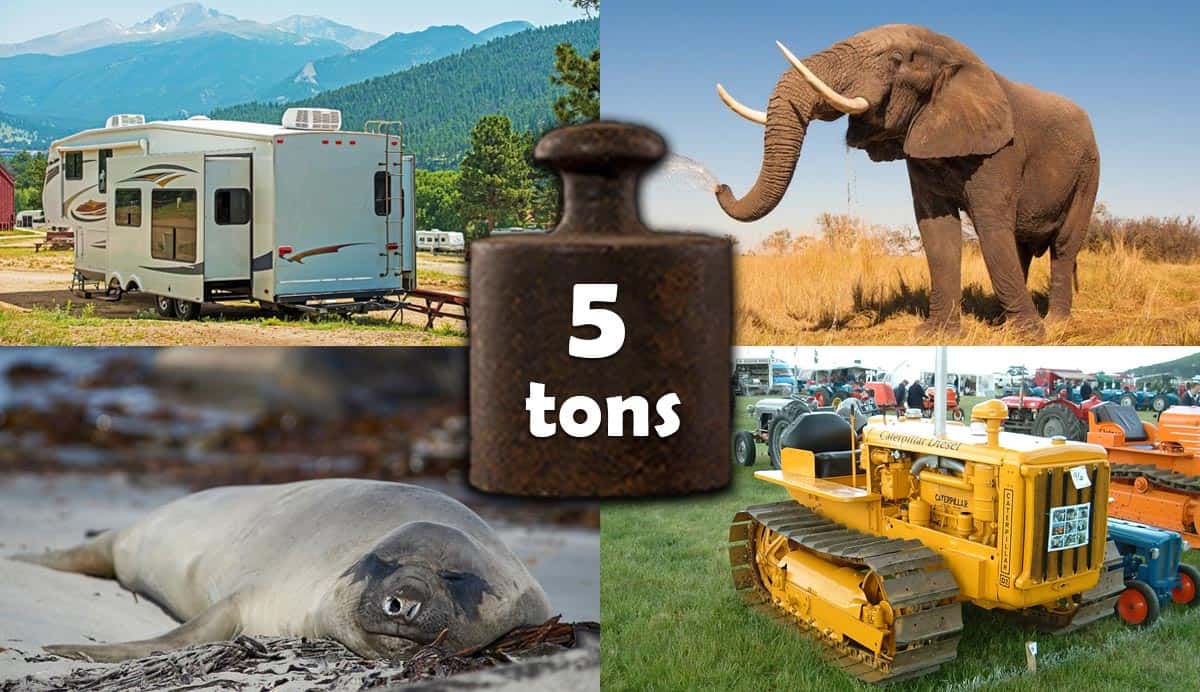 Ever hear of the saying “a ton of bricks”? Well, the meaning behind that implies that a ton is an extremely heavy object.

We’ve got five things we can list as weighing 5 tons, or very close to it.

Elephants are the largest land animals on Earth, and they’re one of the most unique-looking animals. The long noses and trunks, the large, floppy ears, their wide, thick legs set them apart from all others. We’ve listed two specific types of elephants who live on separate continents, as being in the 5 tons family:

African elephants live in sub-Saharan Africa, and grow to between 8.2 and 13 feet tall at the shoulder and weigh between 2.5 to 7 tons or 5,000 to 14,000 pounds, according to the National Geographic. They can live up to 70 years.

Both species of elephants eat all types of vegetation, including a variety of grasses, fruits, leaves, bark and roots. They spend about 16 hours eating, consuming anywhere from 165 to 330 pounds of food per day.

The southern elephant seal is the largest of all seals in the world. The male seals are much larger than the female counterparts.

The males can be up to 20 feet in length, and they are a dark brown to light gray in color just like elephants.

The main source of food for the southern elephant seal are squid and other fish. They may also consume sharks if their food supply is scarce.

They can be under the water for two hours in search of food, and have been recorded more than 3,000 feet below the surface to find their food to survive.

The Travois Type II ambulance is available on the Ford Transit van chassis. It’s been proven to be a reliable ambulance for EMS services throughout the country.

They’re available in Ecoboost gas, regular gas, and diesel. And they weigh in at just under 5 tons at 9,500 pounds.

Bulldozers are extremely large vehicles, with some of them weighing over 300,000 pounds. The Caterpillar D2 is a rare manufactured model on the lighter end.

This particular bulldozer weighs just under 5 tons between 8,000 to 9,000 pounds. Caterpillar manufactured 26,454 of this model, with the last one manufactured in 1957.

Caterpillar began manufacturing new tractors, including the D2 model, in response to the “New Deal” programs. This was initiated by President Franklin Roosevelt to stimulate the economy.

Recreational vehicles (RVs) come in different classes. The average weight for a class B RV is between 3 to 5.5 tons or 6,000 to 11,000 pounds, with cargo carrying capacities around 1,500 pounds.

The Winnebago Travato 59K is one example of a class B RV. It weighs in at just under 5 tons or 10,000 pounds fully loaded. This traveling van has all the comforts of home with sleeping capacity and kitchen.

U-Haul have various size moving trucks for almost any type of move. They’re simple, with easy-to-use services that are found throughout the country.