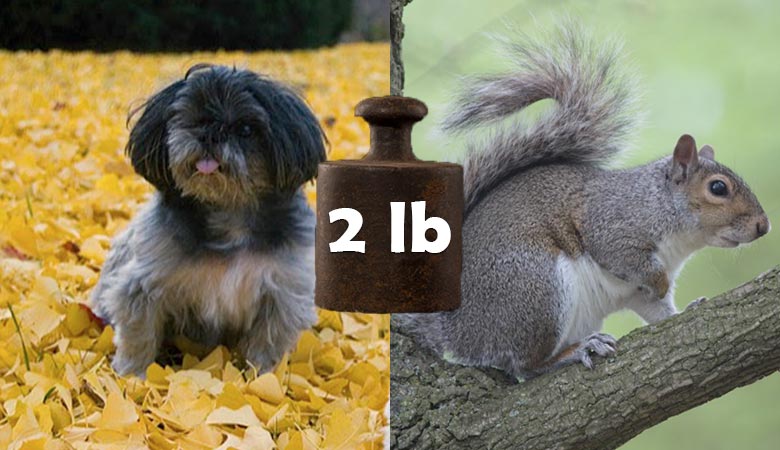 What difference can two pounds make? A big difference if you’re one trying to lose weight over a period of time.

Two pounds is a major difference to a boxer trying to compete in a certain weight division. Two pounds is a big deal and can even make a difference in the existence of some things, even living creatures, whom during their entire lifetime may not ever weigh more than two pounds.

We’ll take a look at six things that not only weigh around 2 pounds, but have been found to be beneficial, sources of nature, and in some cases, just plain adorable, that benefit the human race.

There are two different uses for horseshoes, and one of them is for horses. As we look back in history, horses have been used for hunting, transport, warfare and agriculture.

On farms horses can be used for anything from land preparation to harvesting, including plowing, sowing and haymaking. For all the work horses do, horseshoes were made to protect their hooves. Although there is no standard weight for a horseshoe, the maximum weight is 2 pounds, 10 ounces.

The practice of making horseshoes is not as huge today, but there are still experts who commit to making them comfortable for horses to wear.

Horseshoes is also used in a popular game. Originally an ancient Greek sport, horseshoes has evolved to be a popular sports in the U.S. What started out as a sport where a round discus was thrown at a stake to score points, later evolved into horseshoe pitching. Standards were set regulating the size and weight of horseshoes (2 pounds and 2 ounces), and the stake was to be 8 inches out of the ground.

Toy breed puppies are great companions and make great pets. They love attention, are loyal and intelligent, and are great at learning tricks. Toy breeds gain about 5 to 10% of their body weight each day which is about 3 ounces per week, and they usually achieve their adult weight by 8 months of age. Toy breeds consists of a variety of dog types, to include: Affenpinscher, American Eskimo, Brussel Griffon, Cavalier King Charles Spaniel, Chihuahua, Chinese Crested, Coton de Tulear, English Toy Spaniel, Havanese, Maltese, Miniature Pinscher, Papillon, Pekingese, Pomeranian, Shih Tzu, Toy Poodle, and the Yorkshire Terrier.

The Malayan Flying Fox may be well-known for some of its other names, large fruit bat, kalang, or kalong. It’s among the largest species of bats and weighs between 1.4 and 2.4 pounds. It has a wingspan of up to 4 feet and 11 inches. The Malayan Flying Fox has a face like a fox, but does not have a tail or pointed ears. It’s seen in much of continental and insular Southeast Asia, and nests in tropical forests and swamps, and agricultural areas. It feeds on fruit, nectar, and flowers.

Although the Malayan Flying Fox may be among the species responsible for causing the Malaysian outbreak in 1998, it has also been hunted in Malaysia for bushmeat. Bushmeat is meat found in wildlife species that provides a primary source of animal protein. It is also a cash-earning commodity for inhabitants of tropical forests regions in Africa, Asia and South America.

Gray squirrels is a tree squirrel mostly found in North America. It is often found in woodlands, suburban areas and urban areas. They are a mixture of black, brown and white in color and banded with whitish ends; all of which assumes a grayish look. The body of the squirrel is about 25 to 30 cm in length and its tail is 22 to 25 cm long. In adulthood, the squirrel weighs up to 1 1/2 pounds. The gray squirrel feeds on tree bark, seeds, walnuts, acorns, and fungi found in the forest region.

Gray squirrels can easily be among nature’s gardeners. Without even meaning to do so, gray squirrels help plant seeds throughout the environment which helps in the composition of the forest. Aside from that, they are adorable creatures for humans to watch.

Dumbbells is a great form of strength training and is available in many health clubs and fitness centers.

Dumbbells have a lot of benefits, including they are simple to use, inexpensive, flexible, portable, they can be used for a variety of exercises, and they allow the user to focus on one arm or leg at a time, which is one way to initiate strength gains by using a heavy overload.

Dumbbells come in many weight classes (from 1 pound to 150 pounds). With different weight ranges, it’s important to know your fitness goals to know the right weight for you.

A two-pound dumbbell is most appropriate for a beginner versus someone who has been exercising for a while. They should do about 9-10 repetitions in each of 2-3 sets, and then gently increase their weight size when the dumbbells become too light.

A Quart of Milk

The weight of a quart of milk may not be exact, since it is an organic product. The weight of milk depends on its fat and nutrient content. Milk is composed of 80 to 90 percent water, and the remaining 10 percent consists of nutrients, including fats, carbohydrates, proteins, minerals, and vitamins.

The average weight of a quart of milk is about 2.15 pounds. Milk is a great source of calcium which is a defender to good bone health; it offers a line to potassium which can lower blood pressure, reducing the risk of heart disease and stroke, and it offers a source of vitamin D which has proven to help protect against cancer.