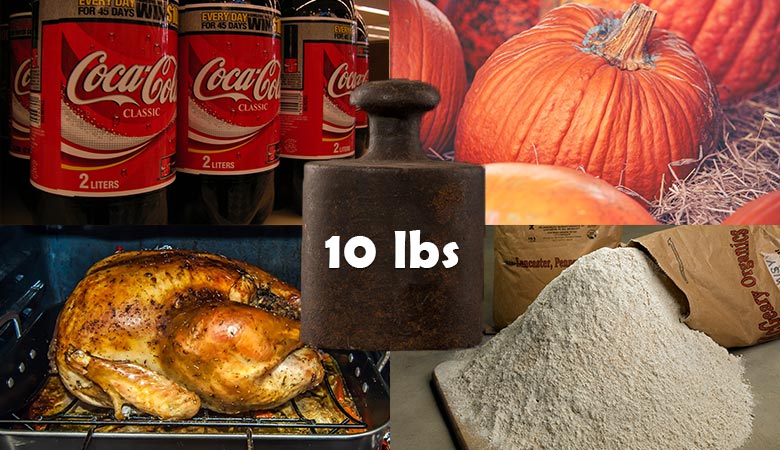 Your household contains many items that vary in weight. Have you ever found yourself thinking of which household items weigh close to or are 10 pounds? Well, a lot of the things you have in your house weigh about 10 pounds.

Why does this matter? If you look around your residence, you will probably have all, if not most, of the items in this list, whether you need them for a home workout or if you are avoiding lifting heavy things.

So, what are some of these household items that weigh 10 pounds? If you think about it, many of the items in your pantry, kitchen, appliances, pets, and even home office supplies probably weigh ten pounds. You might not carry these items around all day, but you definitely interact with them often.

Some of these items work well as an approximate weight comparison, while others might be heavier or lighter. Whatever the case, these items will give you an estimation of what 10 pounds feels like.

1.  A holiday ham or turkey

Nothing draws people together as much as food does. Holidays are especially great because of family friends add food. It’s a chance to showcase your cooking skills and wow everyone. That’s why many people look forward to the main meal, which is often either a turkey or holiday ham. You have to make sure it’s big enough to feed your entire family and then some because everyone loves getting seconds.

Pumpkins are loved worldwide from being used as an ingredient in food to decorations, especially over Halloween. They are available in all shapes and sizes from small baby pam ones weighing about 4 pounds to others weighing over 25 pounds. There are giant pumpkins that weigh anywhere between 150 pounds to over a ton.

The biggest pumpkin in the world weighs about 2624 pounds (which we wrote more about in this article), but you won’t find that at your local store. The ones you will find there will vary in weight depending on the type you pick. For instance, the lantern pumpkin used to make jack-o-lanterns at Halloween, averagely weigh 7 to 11 pounds, while the typical face carving pumpkin weighs anywhere between 12 to 18 pounds.

Cats are great pets. They make great companions and are fun to pet and play with. Because of these and other adorable features, cat love has skyrocketed over the years.

Now a lot more people own cats, not just old ladies. While playing with your cat at the end of the day is fun, have you ever held your cat for a long period? Well, don’t be surprised if you start feeling tired soon, this is because your little furry friend can weigh anywhere between 5 to a staggering 25 pounds. However, most healthy adult cats weigh about 10 pounds, but this could vary depending on the breed, how much they eat, and their gender.

Milk has been enjoyed worldwide for thousands of years because of its great taste and nutritious benefits. That’s why its found in every home. By definition, milk is a nutrient-rich fluid produced by female mammals to feed their young.

There are many types of milk available from common types such as cow, sheep, or goat milk to more nouveau nondairy types such as soy, coconut, almond, and so on. Milk is full of vital nutrients, proteins, fats, antioxidants, and minerals.

Milk goes well with cookies, cereal, or by itself. A gallon of milk is about 8.6 pounds while a quart comes in at about 2.15 pounds rounding off to 10 pounds in total; about 20 glasses of milk.

Flour is a baking essential and is used to make a lot of the food you eat at home from bread, cakes, and pastries to gravy and so much more, making it a staple in every home.

There are different types of flour, such as all-purpose flour, self-raising flour, which has leavening agents added in, hard flour, and many more. Flour often comes prepackaged in 2-pound or 5-pound bags; however, you can find 10-pound ones if you are looking for a large bag of flour; this is about 36 cups of flour.

Anytime you go to a store, you will see sodas in 2-liter bottles. These soft drinks are another staple item found in many homes and come in various flavors such as grape, lemon, orange, and strawberry.

Sodas are referred to as soft drinks because they don’t contain any alcohol. Unlike milk, water, and other drinks, soda is sold in liters, not gallons. This is because the plastic soda bottle was invented around the time the US contemplated converting to the metric system. So, the 2-liter soda bottles were introduced instead of the half-gallon bottles. While the move to metric fizzled out, consumers liked the bottle, so it stayed. A 2-litter bottle weighs about 4.4 pounds, so three of them would weigh about 13.2 pounds.

Depending on the item, 10 pounds can be quite heavy to carry. Three bottles of soda or 1 ¼ gallon of milk might seem light, but they weigh just the same as a 10-pound bag of flour or a holiday turkey.

Luckily you don’t need to lug these items everywhere you go. While this is not a complete list of all 10-pound household items, it gives you a rough idea of what 10-pounds looks like.