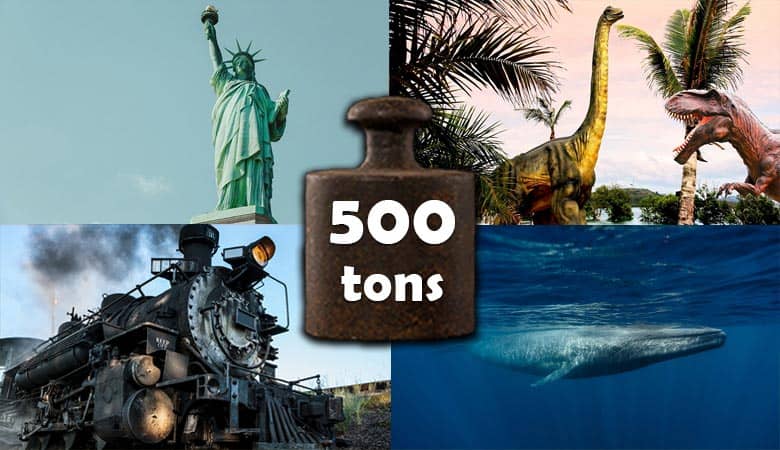 How could you look at an object and determine just by its stature that it weighs as much?

There would need to be some type of comparison. So we’ve put together a list of things, that if together, would weigh 500 tons.

Not all homes weigh the same. In order to factor in the weight of a house, important information is needed, such as the square footage, the number of levels, and the number of full-sized rooms for calculating the contents of the home.

However, the average weight of a 2,000 square foot, one-story empty home is approximately 400,000 pounds. That includes the weight of the concrete foundation.

When calculations of the home’s contents are estimated, it increases the weight by about 6,000 pounds. Two to three houses of this same size are nearly close to or slightly over 500 tons.

Blue whales are found in all oceans except the Arctic Ocean, and there are currently five recognized subspecies of the mammal.

Their primary source of diet is krill or tiny shrimp-like animals. Some of the larger blue whales may eat up to six tons of krill a day. Blue whales generally migrate seasonally between summer feeding grounds and winter breeding grounds.

Their movement varies with location; in general, distribution is driven largely by food availability. They tend to attend in waters where krill is likely to be found.

Their average lifespan is 80 to 90 years. Two to three blue whales together weigh around 500 tons.

There are different types and models of train engines, each with a different weight. The average engine weighs about 220 tons.

The engine, also known as a locomotive, provides the motive power for a train. If a locomotive is capable of carrying a payload, it is referred to as a multiple unit, motor coach, railcar or power car. That is increasingly common for passenger trains.

Traditionally locomotives have pulled from the front. Now, the push-pull operation has become common. With this, the train may have a locomotive at the front, the rear, or in the back of the train.

Railroads also use distributed power where the front may have one or two locomotives followed by a mid-train locomotive that is controlled remotely from the lead unit.

When you put two of these locomotives together, you have a combined weight of nearly 500 tons.

An obelisk is a tall, four-sided, narrow tapering monument that ends in a pyramid-like shape at the top.

Obelisks were prominent in the architecture of the ancient Egyptians, and they played a major role in their religion.

They were placed in pairs at the entrance of the temples. Ancient obelisks consist of a single stone. However, most modern-day obelisks are made of several stones.

The earliest temple obelisk, still in its original form, is 68 feet high and weighs 120 tons. In Paris, one of the two Luxor Obelisks in the Place de la Concorde stands 75 feet tall and weighs over 250 tons.

One of the most well-known obelisks is 82 feet tall and weighs 331 tons located at Saint Peter’s Square.

The largest standing and tallest Egyptian obelisk is the Lateran Obelisk in Rome. It stands 105 feet tall and weighs 455 tons.

Sauropods are members of the dinosaur subgroup. They’re marked by their large size, their long neck, their four-legged stance, and their herbivorous diets.

They were the largest of all dinosaurs and among the largest land animals ever to live. The oldest known sauropod dinosaurs are known from the Early Jurassic.

Sauropods are one of the most recognizable groups of dinosaurs and have become a fixture in popular culture due to their size.

The tallest known sauropod was the giant Barosaurus specimen at 72 feet tall. By comparison, the giraffe, the tallest of all living land animals today, is only 16 to 18 feet tall. Five Sauropods together weigh about 500 tons.

The Statue of Liberty is one of the most recognizable American symbols. It commemorates the friendship between the U.S. and France.

Presented to the American minister to France in 1884, the statue was completed, disassembled, and shipped to New York City in 1885. President Grover Cleveland dedicated the statue on October 28, 1886.

Over the years, the torch has undergone several modifications, and there was a redesign in the 1980s. The Statue of Liberty weighs 225 tons; two of them together are nearly 500 tons.