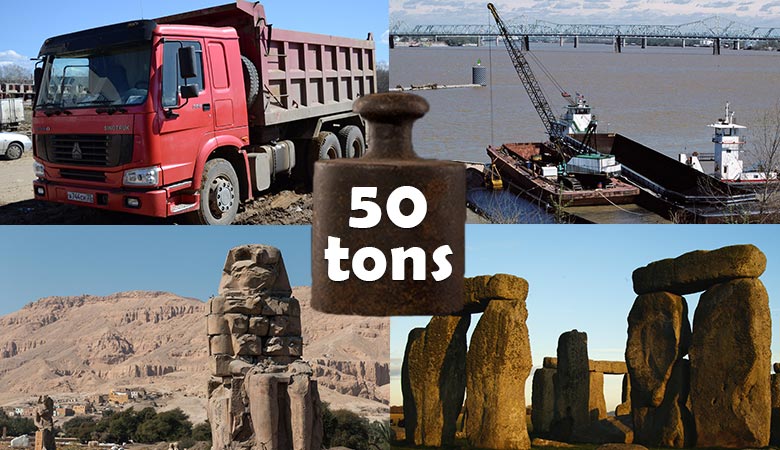 A lot of people go through life without really understanding the weight of the things that surround them. While most products have their weights indicated on them, others such as pets, papers, or even animals don’t.

For other things, it’s hard to even comprehend how heavy they are. Have you ever thought of things that weigh 50 tons?

To put that weight in perspective, an ordinary adult male weighs about 200 pounds, so a ton is about ten men, with 50 tons equivalent to 500 men. Why does this matter? Knowing about things that weigh 50 tons is informative and helps you easily estimate what 50 tons look like.

A barge is a long, flat bottomed, offshore boat used for carrying freight on canals and rivers. It can either be towed or tugged by other vessels.

The flat shape of the barge allows it to have a high cargo carrying capacity. A crane barge can have sheer-leg cranes or fully rotating cranes used to load and offload goods.

The sheer-leg cranes can lift loads and luff, but they don’t rotate. Barges have been used to ferry goods for many years from medieval times to the modern age.

These include bulky items such as coal, cereals, oil, garbage, recyclable materials, sand, gravel, timber, etc. Crane barges come in different sizes; for instance, the 120*30*7 barge has a 50-ton crane.

Whales are among the largest sea mammals on earth. They live in the open ocean feeding, mating and raising their young there.

Their adaptation to underwater life is so extreme that they cannot survive on land. There are several different types of whales, all ranging in different sizes. The shortest one is the dwarf sperm whale, which measures about 2.6 meters and weighs 298 pounds. On the other end is the blue whale measuring about 30 meters long and weighing about 210 tons.

Humpback whales, Right whales, and Sperm whales all weigh about 50 tons when fully grown. However, because whales are dimorphic, there are more notable differences between males and females, with females often weighing more than their male counterparts.

These enormous mammals need to eat about a ton of food every day, thus their massive weight.

In Egyptian culture, it was not uncommon for large statues to be erected for great pharaohs. Unfortunately, 3000 years ago, one such statue was toppled due to an earthquake. However, it has risen again.

The massive statue of pharaoh Amenhotep III was restored to its former glory in a joint effort by Egyptian and German archeologists. This massive statue stands 13 meters tall and weighs a whopping 50 tons.

This statue joins two other massive effigies of the great Egyptian pharaoh, the Colossi of Memnon, and are part of the temple of Amenhotep III conservation project.

This massive temple erected between 1390 and 1353 BC stood 100 meters tall and 600 meters long. However, due to erosion, only the lower levels remained intact.

HOWO trucks are a series of heavy-duty trucks from the China National Heavy-duty Truck Group. The name HOWO came from an adaptation of the Chinese logo on the certificate that reads HAO WO in spoken language.

This dump truck is equipped with an open box bed and hydraulic rams to lift the front allowing materials to be offloaded. Dumptruck configurations are two, three, and four axles. The four-axle eight-wheeled truck has two steering axles at the front and two powered axles at the back.

These trucks are limited to carrying only 32 tons in most EU countries. In the US, bigger dump trucks known as transfer dump trucks are used to transport construction material, gravel, asphalt, and so on.

Depending on the axel configuration, these trucks can haul up to 140 tons. The HOWO has a capacity of anywhere between 25 to 30 tons.

Stonehenge is a historical heritage site in England. This massive stone monument is made up primarily of sarsen stones.

These stones represent the primary building material used in the monument’s construction. Originally 80 stones were used, but now only 53 remain. Sarsen stone is a silicified sandstone found in scattered blocks in southern England.

Among the many riddles of Stonehenge is how the stones got to the site. There are two types of stones used to build the monument, sarsen, and bluestones. These sarsen stones each weigh about 25 tons, and the bluestones weigh about 2 to 5 tons each.

This, coupled with the fact that the sarsen stones could have been sourced from the Marlborough Downs about 20 miles away and the bluestones in west wales over 150 miles away, add to the stone monument’s awe.

Houses today are a sight to behold. With the different designs and materials used, it’s hard to estimate how heavy one can be. However, a 149sq.m (1600sqft), single-level, unfurnished house without extensive masonry can weigh about 100 tons. If heavier materials are used, then the weight increases and vice versa. Some houses can even weigh up to 172 tons without using a lot of masonries.

While this list is not exhaustive, it has given you an idea of what 50 tons looks line. Who would have thought that a house is heavier than a humpback whale?

The most interesting thing about this list is the variety of items on it, from statues to barges and even trucks. Now you have an idea of what 50 tons looks like.