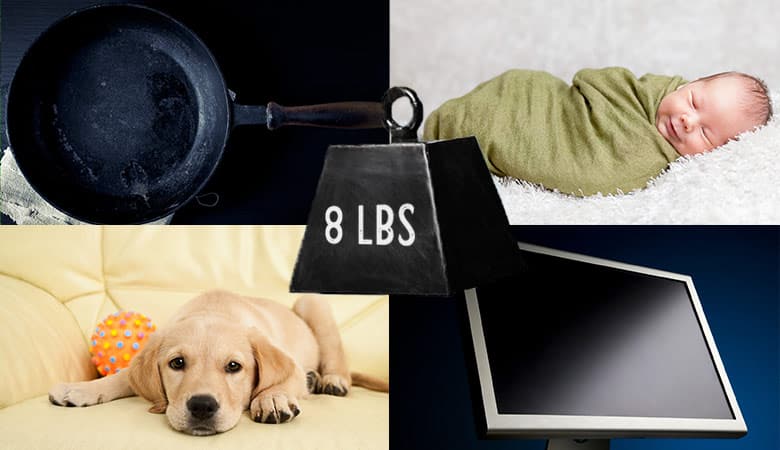 When you think about how much things weigh, it’s probably because you need to carry them, and you want to estimate how tired you will be in the end. But, each day, you interact with items that weigh around 8 pounds without knowing it.

Look around your kitchen, for instance, or your office? There are tons of everyday items that weigh eight pounds, anything from your laptop to that chubby newborn who puts a smile on your face every time they smile in their dreams.

So, what are some of the most common items that weigh eight pounds?

If you look closely, most of these items are found around the house, and although you don’t use them every day, you’ve probably interacted with them more than once in a week.

Some will work well as comparison weight, and some may even be heavier or lighter. Whether you are looking for fun facts or just feeding your curiosity, these items will give you a rough idea of what things weigh.

Let’s face it. Nothing beats a cute pup at home. Usually, you get a lab pup when they are around 8 weeks old. Although these little dogs can be destructive, the joy they bring to the house compensates for it, even for the few teething accidents you may experience.

In weight, healthy Labrador puppies weigh around 8 to 12 pounds, which is just the right weight for you to lift them for a cuddle. This is around 4 to 7 kg’s. Obviously, this will only last for a few days or weeks before they are fully grown and weighing over 50 to 70 pounds depending on sex and nutrition.

A cup of milk has more to offer than most people like to admit. For starters, it’s packed with healthy nutrients from vitamin D, B12, Calcium, Phosphorous, and Potassium. Milk is also a great source of proteins, fats, and calories.

Although it’s a hotly debated topic by nutritionists, nothing beats a glass of milk with hot cookies. What you might not know, however, is that each gallon of milk you buy from the store weighs around 8.6 pounds. The gallon has approximately 16 glasses of milk weighing roughly 8.54 ounces.

Every parent wants their child to have a healthy weight. If it’s too low, you fret, and when it’s too high, you worry because morbid obesity comes with tons of complications.

Your diet and weight are said to be among the main contributor to your baby’s weight, but it’s not the only factor. Others include genetics, prenatal health, and gender.

A newborn baby will weigh about 7.5 pounds to around 8.75 pounds. This is considered the average weight for most newborns. Babies born lighter or heavier than this may need more tests and monitoring, just to ensure they are strong and healthy.

Xbox one is a popular game console and one of the best when it comes to playing multi-platform games. Microsoft took everything gamers love about the Xbox One and made it better before releasing the Xbox One S.

This console is smaller, quieter, and has powerful features such as HDR. We have to admit, it’s also whiter than Santa’s beard. Sorry, Santa.

The weight is not so far off compared to the Xbox One, because this console comes in at around 7.9 pounds. This makes it light enough to pack and travel with if you don’t want to leave your games behind.

Cat’s will not run to the door when they hear you coming unless they are hungry, but they are a joy to have around. The cuddles and snoring cat lovers look forward to are oh so sweet and warm, and don’t get started on how much netizens appreciate cat videos.

But, have you ever tried holding your cat for long? Don’t be surprised if your arms start to ache because these furry friends weigh between 8 and 12 pounds. Their male counterparts weight anywhere between 11 and 15 pounds. This is common in Siamese cats, so the weight could vary depending on the breed, nutrition, and sex.

Most people own 11” and 12” iron cast pots at home, especially if they are foodies. While preparing your own food is a great thing, most people don’t necessarily stop to think how much that pot weighs. Most iron cast pots of this size tend to weigh around 7.5 pounds, which is not very far from our 8 pounds mark. While making your own food makes it easier to manage your weight, promote healing, and boost your immune system, a 7.5-pound pot is definitely not light. Luckily, scientists love heavy pots because they are good conductors of heat and maintain the temperature, which keeps the food hot for longer.

When seeking a large monitor for your desktop, most people prefer the 24″ and with good reason. First, it doesn’t take too much space, and secondly, it gets the work done. Most models are also color-accurate, which makes the monitors perfect for movies and gaming. 24-inch monitors weigh around 8.91 pounds, mainly because of their size. Granted, the attraction is usually the great display and connectivity you get with such monitors, so 8 pounds is a small price to pay. Besides, you won’t be holding it on your lap.

8 pounds is heavy to carry, depending on the item. A gallon of milk will seem light because you don’t need to take it everywhere, but a laptop may get on your nerves if you work outdoors and lug it with you all day. Either way, you probably have one of these items, or pets at home.