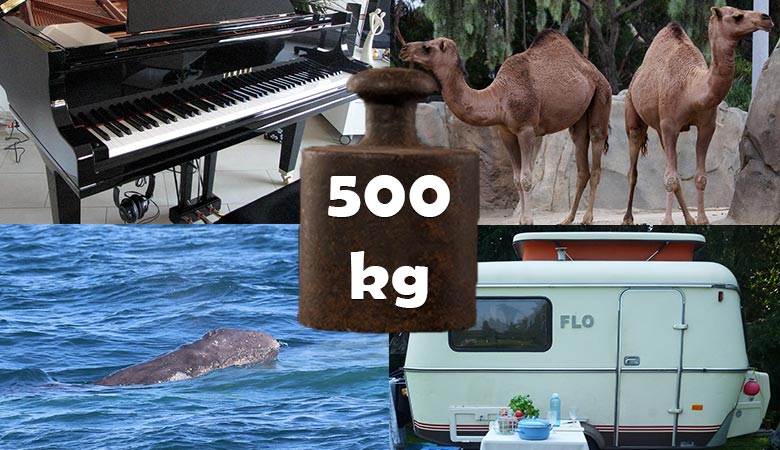 Being able to put more things in life into perspective by increasing our knowledge of what a wide variety of things weigh can be quite rewarding.

When conducting research on 7 things that weigh 500 kilograms (0.5t), we had to consider a good cross section of both living things and inanimate objects.

Although there are heaps of things that weigh exactly 500 kilograms at any particular time, some items will either get heavier or lighter during their lifespan.

Another thing to consider is that the higher we go up with weight, in many cases but not all, the bigger the things we find at said weight will be.

If you love learning about big or small objects that look like they weigh too much to pick up, feast your eyes on our list of 7 things that weigh 500kg or 1,102 pounds below:

Some items that are 500kg or even heavier do look like they are quite impossible to lift.

However, with the advancement in modern technology, nothing is too heavy these days to be picked up – even if they do weigh 500kg or half a ton.

The tallest of the camel species, this single-hump and fairly bizarre looking animal inhabits arid or semi-arid regions of Africa as well as Asia and Australia.

And although the female of the species will not usually exceed 500kg in weight, the adult Dromedary Camel can go up to around 600kg or even heavier.

This domesticated camel is predominantly used for providing camel tour trips as well as being utilised for carrying materials and as a type of taxi, in some cases. .

Although the average professional grand piano will not weigh too much more than 300kg, grand pianos used in huge concert halls are much heavier.

Apart from its hardwood shell and carbon steel piano strings, the main reason for a grand piano weighing up to 500kg is its cast iron frame – sometimes called a piano plate or harp.

Concert pianists that wonder how heavy their grand piano is will already be aware of the importance of putting a new grand piano in exactly the right place – well, you wouldn’t want to have to move it, would you?

Lots of couples with or without kids will love heading down to a caravan park in the countryside or on the coast in order to enjoy a bit of relaxation.

However, buying a caravan that weighs 500kg will often lead to a lack of space as only the mini caravans such as 3-berth models are this light.

Of course, people that prefer to take their small or large caravan on the back of their vehicle for more vacation variety should know exactly what weight they have attached at the rear of their truck or car.

The Gray Whale, although mostly inhabiting the eastern and western parts of the North Pacific Oceans, has been spotted in other parts of the world.

Reaching up to around 15 meters in length, a newborn Gray Whale will average at about 500kg in weight.

If you were thinking about how it got its name, the term ‘Gray Whale’ was coined due to the gray patches it has on its very dark skin – something the massive mammal has plenty of.

If you have been struggling to think of what to get a special person who seems to have everything already, take a look at this beauty.

With the largest of its emeralds measuring a whopping 9 inches, this huge stone is around 29 inches wide and weighs 500kg.

Wow! No wonder experts find it impossible to put a price tag on the world’s largest emerald-embedded stone.

The 130 or so emerald crystals embedded in this huge rock totals an amazing 170,000 carats in weight.

Discovered in Charente, France and believed to come from a giant sauropod, this mammoth thigh bone, measuring around 2 meters in length, is certainly something to marvel at.

And as the aforementioned species is possibly amongst the largest animals ever to have roamed the earth, it is not at all surprising that our giant dinosaur bone weighs 500kg.

That said, it may not be all that long before paleontologists discover an even bigger dinosaur bone, and you know what that means, right? Yes, you guessed it – more weight!

So, next time you throw your dog a bone, think about this mammoth fossil.

Most of us are aware of how horses inhabiting many parts of North America and south of the border were brought over by Europeans.

However, not too many people taking a look at this list are likely to know that many of the adult breeds of horse will weigh around 500kg.

Of course, just like with all animals on our list, the weight of horses will vary quite a lot.

And not just because of the life stage they are at either, but due to other factors too.