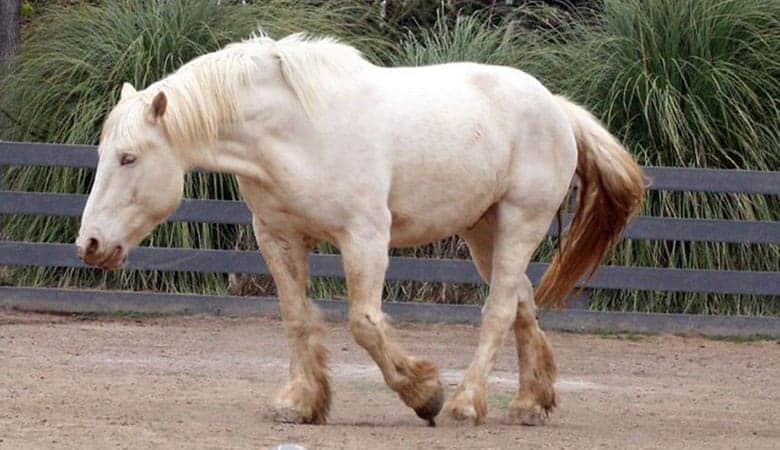 Animals can weigh close to 1000 pounds. This can seem like a lot of weight to carry around until you see the group of animals that fall into this category. It might be shocking to see what animals draw near that half ton mark.

What does a list of animals who weigh around 1000 pounds look like? Here are the top examples:

Now that we know what a 1000-pound animal looks like it, why do they carry this amount of weight around daily? There are a few reasons why body mass is important to these warm-blooded mammals and survival is at the top of the list.

When it comes to the weight of a horse it highly depends on where it lives. Is it in the wild or kept in a stable? Some domesticated horse breeds are:

Horses that are considered domesticated can actually get too fat. They live on a diet of hay and grain. If they are not exercised enough, they can get sick or even founder.

To founder means they have damaged tissue in their hooves and walking can become pretty painful for them if left untreated.

Horses can even develop diabetes type symptoms if their diet is not controlled.

Wild horses are considered unclaimed or unbranded animals that freely roam on public lands. These animals must fight for their own resources such as:

Male horses, or studs, are highly territorial and will fight other males if they feel threatened.

These wild horses take care of themselves by finding food or shelter and on average weigh around 700-1000 pounds. If they struggle for territory, there is a chance they could starve or go thirsty. A wild horse’s weight management is going to depend on the individual horse’s survival skills.

Cows can weigh anywhere from 1000-2000 pounds. The weight of a cow is highly connected to money or profit for the farmer to the consumer. If you are a cow farmer, then you want the cows to weigh more since generally they connect dollars per pound. A fatter cow will bring more money than the slimmer cow.

Cows spend lots of time eating a diet made up of:

A trend in the farming industry is to grain feed cows certain mixtures of food to help build up the fat in their beef. There’s a little bit of controversy here, and it’s often seen in the organic communities. The communities say grass fed is better than grain fed. So far there’s not been enough evidence to stop farmers from feeding the cows what they believe they need.

Bears come in an assortment of shapes and sizes. Weight ranges from 200 pounds to over 1500 pounds!

It is going to depend on where these furry creatures live and what they eat that packs on the weight for them.

Polar bears diet is usually made up of meat they hunt from swimming in frigid water. They spend a lot of time hunting for food which keeps them fat enough to protect against the cold air and cold seas.

On the other hand, an American Black Bear only weighs 660 pounds and it’s due to the habitat they live in. The black bear lives all throughout the United States and their diet varies to what is available, for example:

I’ve included the seal because some of these mammals weigh in at around 1000 pounds, but some can even weigh as much as 9000 pounds! Seals can dive at great depths in search for food. They are also able to go without breathing for long periods of time giving them an advantage over their food when hunting underwater.

A true seal spends most of their lives in colder climates going in and out of the water. The true seal is a seal that is considered earless while sea lions have external ear flaps. Examples of true seals include:

A female giraffe can weigh around 1800 pounds. A giraffe is considered the tallest animal in the world ranging from 14-19 feet tall. They are herbivores and consume leaves and buds from tall tree branches. Common facts about giraffes:

Why Animals Need to Weigh 1000 pounds

Mammals are known to eat a lot of food. One of the reasons is only a small portion of the food is turned into body fat. Body fat helps the animal stay at a consistent body temperature. Several animals live predominantly outside, victims to elements native to their habitats.

If the mammal is responsible for their own shelter and food they spend several hours a day taking care of their territory and stocking up on body fat. Because larger mammals, especially carnivores, spend so much time hunting and stalking prey they tend to be larger than smaller animals. This can be due to size and muscle needed to carry out their tasks.

One other important note is sex of mammal. While researching I noticed several animals are divided up between facts on the male and facts on the female. This can be connected to what each animal is responsible for in their daily life.

Pros and Cons to Living the 1000-pound life

The largest pro in this heavy weight category has to be survival. These animals are known to hold larger stores of muscle and fat to keep themselves warm and in proper homeostasis. Carrying this much weight keeps these mammals warm when they are living in colder temperatures or swimming around in freezing waters.

The larger body mass helps them stay alive because it stores more fat to nurture them during periods where they are unable to find food.

The con is maintenance. For the domesticated animals they depend heavily on their owner or caretaker to give them the needed daily nutrition. This can come in forms of hay, grain or pastureland. They also depend on outside help for proper exercise and movement, without this they can become too fat, leading to disease and pain.

Animals who live predominantly in the wild don’t live in the confinements of fences, cages or buildings. They are free to roam where they need to.

Unfortunately, they are also responsible for finding the right amount of food to keep them operating at premium levels. They need to be their best to survive other predators and beat out competition for available food resources.