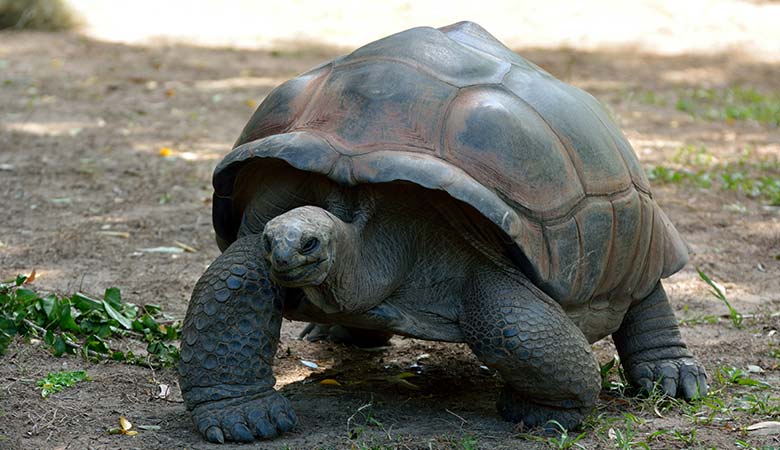 A 100-foot-long blue whale breaches the ocean’s surface and splashes down with enough force to create a tidal wave. An enraged bull elephant flips a LandRover on its side like it was a toy.

The world’s biggest, heaviest animals amaze us and challenge our comprehension because we can’t imagine that much weight. We can more easily identify with animals a little further down the scale, animals that start around the top of the human weight range and go up from there.

The diversity within the animal kingdom makes categorizing and ranking animals by any criteria – weight, height, speed, breeding, habitat, etc. – very difficult, and no list can ever be truly comprehensive. This article will deal with the more or less iconic species of animals, and not so much the seemingly infinite number of subspecies and variations of essentially the same animal.

You love them in Coca-Cola commercials during the Christmas season. If you saw a couple approaching our campsite in the Yukon, you’d love them a little less.

While a full-grown, well-fed male polar bear can weigh up to 1500 pounds, most polar bears – especially females – come in at considerably less, generally in the range of 800 to 1100 pounds. Still, that’s a massive animal, one whose claws and fangs are as intimidating as its sheer size.

It’s a wonder that polar bears weigh as much as they do. They should be fit and trim, considering that they spend 50 percent of their time hunting for food. Males tend to hunt only for themselves, while females hunt for themselves and any dependent cubs, which might hang around for up to 30 months.

Polar bear populations are in decline. Destruction (melting) of sea ice habitat due to global warming has led to polar bears being designated as a threatened species on the Endangered Species Act in 2008.

Shy and generally reclusive, the tapir looks like the offspring between a pig and an elephant. He forages for vegetation in forested areas of South America, Central America, and southeast Asia, preferring river basins. Although his habitat doesn’t necessarily require streams, rivers and lakes, he will spend a majority of his time in the water if it’s available.

As with most species, males are bigger and heavier than females. Males in captivity have grown as large as 700 pounds, but that is the exception rather than the rule. Most tapirs are in the 400 to 600-pound range.

The domestic pig (hog, swine – whatever you want to call it) grows to a maximum weight of around 700 pounds, although record books have scores of accounts of pigs – domestic and feral – topping the scale at over 1000 pounds.

Pigs are a primary part of the agricultural industry on most of the world’s continents. They’re harvested not only for their meat but for their bone, hide, and bristles. The domestic pig is not likely to ever be on an endangered species list. Females are sexually mature as early as three months and come into estrus every three to four weeks if not successfully impregnated.

Whether plodding through the Sahara looking for an oasis or lumbering through an office asking fellow employees what day it is (TV commercial), the camel is an unmistakable beast of burden, instantly recognized by school children without prompting.

There are two main types of camels, based on the number of humps they possess.  The single-humped dromedary camel actually outweighs its two-humped cousin – the Bactrian. An adult dromedary weighs in at 880 to 1300 pounds, while the Bactrian weighs around 1000 pounds.

There are seven species of camels, with dromedaries being by far the most prevalent (94%). The Wild Bactrian camel is considered a critically endangered species.

In northwest U.S. states, body shop owners can thank the moose for a chunk of their business. Over 1000 car/moose collisions are reported each year. And when a car hits moose, both lose, because a moose can weigh over 1000 pounds.

Mr. Moose is found in forests all across the northern extremes of the northern hemisphere, from Maine to the American Northwest, Canada, and Russia.

He has few natural predators to fear. His number one enemy is the wolf, who tend to hunt in packs, and the grizzly bear, which will persist in his attacks on a moose if he is hungry enough.

Majestic and fearsome all at once, the Siberian tiger is the largest cat in the world, topping out at around 700 pounds. Considerably heavier than other species of tiger, the Siberian Tiger has thicker fur for protection against the brutal Siberian winters.

The Siberian tiger is an endangered species.

Several species of seals fit in the weight range of this list.  The leopard seal is the second-largest seal species in the Antarctic. His most-feared predator is the killer whale.

The grizzly bear, a.k.a. Kodiak bear, a.k.a. brown bear is a powerful bear, worthy of respect from all who wander into his territory – whether man or beast. Males can reach a height of over 10 feet and weight in excess of 600 pounds.

There are many tall tales about grizzly bears, including many highly-embellished accounts of grizzlies over 12 feet tall and weighing 1600 pounds, but such accounts should be considered only with a healthy dose of skepticism.

The grizzly bears’ range used to run much farther south, but encroachment by man has forced them northward. While fairly common in Alaska and Canada, grizzly bears can be found in the wild in the lower 48 states only in northern reaches of Washington, Idaho, and Montana.

Sometimes referred to as the “redneck mermaid,” the manatee is a herbivore that can be found in shallow rivers and bays in southern Florida. He’s a gentle giant, weighing as much as 1000 pounds for the U.S. version, but peaking at over 1200 pounds in places like Africa, South America, and the West Indies.

He is related to the elephant. Hunting and collisions with powered watercraft have reduced the numbers of manatee in the U.S., and the Florida manatee is protected by a number of federal laws.

Cuter and much, much smaller than his famous cousin, the pygmy hippopotamus has a limited range, residing in swamps of West Africa. The pygmy hippo is nocturnal and quite reclusive and wasn’t even known about by the western world until the early 1900s.

It is considered an endangered species.

Don’t talk back, yak. That might be the translation of what the domestic yak hears in Tibetan while carrying a load of goods up a mountain slope. Yaks have been domesticated for centuries in the Himalayan region of India, Tibet, and Nepal as well as in portions of China and Russian Siberia.

Male yaks tend to weigh nearly twice as much as females, topping out at over 1200 pounds.

One of America’s most feared predators is the American alligator, who inhabits the swamps, river basins and lakes of the U.S. southland, generally along the Gulf Coast, ranging from Texas to Florida.

If not for protective measures put in place in the 1970s, it’s possible that the Galapagos tortoise wouldn’t even be around at all today, despite his penchant for long life. They could have been hunted to extinction otherwise.

Galapagos tortoises lead a simple, quiet life, grazing and sunning, and now that man is less of a threat, they can grow fat and sassy, reaching a weight of nearly 600 pounds.

So much attention is paid to the great white shark, it’s easy to overlook the fact that more attacks on humans are committed by tiger sharks than any other species of shark.

This bad boy can grow up to 15 feet long and achieve a weight of over 1400 pounds.