Diamonds have long been used to measure of success and power. This explains why wealthy people keep diamonds as their prized possessions.

Over time, large diamonds have attracted buyers who are willing to drop millions on a single piece of gem.

Africa has produced some of the heaviest diamonds worldwide, which have attracted significant attention even among royals. This is enough to tell you about the actual value of a diamond.

Below are some of the heaviest diamonds valued at hundreds of millions.

The Golden Jubilee Diamond is the largest cut diamond globally, weighing 545.67 carats (109.13 g). The diamond was first discovered in 1985 in the South African Premier mine.

The cutting was done by Gabriel Tolkowsky, famed for designing the Centenary diamond.

The Golden Jubilee Diamond is valued between $5 million and $12 million.

The Cullinan takes the first spot for the most massive rough diamond ever found.

The gem is shaped like a pear and weighs 530.20 carats (106 g) with 76 facets. It is also the largest of the nine cut stones from the original Cullinan diamond that weighed 3106 carats.

The Cullinan I diamond is also called the Star of Africa, with its perfect colors have ramped up its values closer to $400 million.

The story behind the incomparable diamond is quite fascinating. It was discovered by a little girl that was checking through a pile of rubble as she played. That was in 1984 around the MIBA Diamond Mine in the Democratic Republic of Congo.

Before cutting the diamond, it weighed about 890 carats and was the most massive brown diamond globally.

The brownish-yellow diamond was designed by Marvin Samuel’s team, a well-known Jeweler, and its value went up to around $20 million. 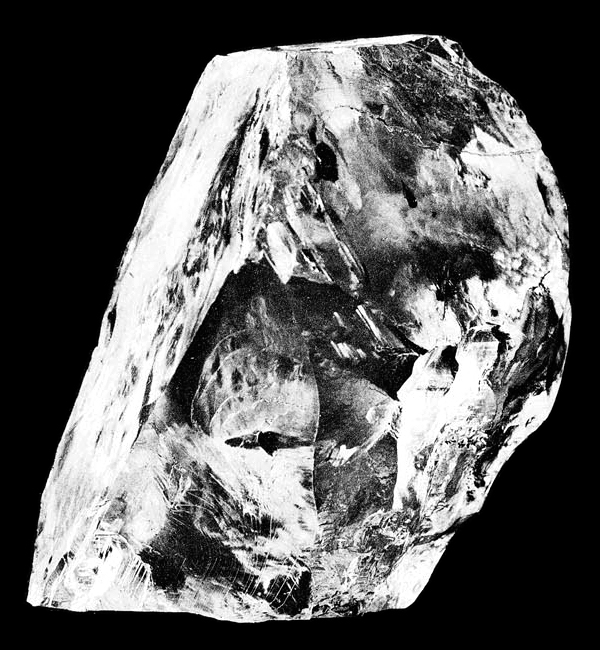 The Cullinan II Diamond is the second-heaviest gem to be cut from the original South African Cullinan stone. The Cullinan II is also known as the Lesser Star of Africa and weighs around 317.4 carats making it the fourth heaviest polished diamond worldwide.

The parent diamond derives from Sir Thomas Cullinan, the initial founder of South Africa’s Premier mine.

This gem quality is the heaviest flawless D-color gem embedded in the center of the British Imperial State Crown. The value of this diamond is stated to be at the tune of $200 million.

Although it is number five on this list of the heaviest diamonds in the world, the spirit of de Grisogono is the biggest and heaviest black cut diamond weighing 36.69 carats (62.5 g).

When it was initially extracted from the western parts of Central Africa, it weighed 587 carats uncut.

The diamond gem was then shipped to Switzerland to be cut by designer Fawaz Gruosi. The designer used the traditional Mogul diamond cutting method to make it flawless.

The black diamond is placed on a white gold ring with additional 702 smaller white diamonds that bring its total weight to 36.69 carats.

The Premier mine seems to be dominating the global diamond space, with the Centenary diamond being the third-largest it has ever produced.

The Centenary diamond has 247 facets, 168 on the stone itself and 83 surrounding the girdle. It is valued at $100 million, but the current owner or location remains hidden.

The original Jubilee Diamond was 650.80 carats and was produced in the Jagersfontein Mine in South Africa in 1895.

The rough stone had an irregular octahedron shape with indefinite shapes and faces. After cutting, the gem quality was at 245.35 carats with superior diamond size and purity.

It was initially called the Reitz Diamond, s1and its value is currently unknown. The Jubilee diamond is an E-grade colorless diamond renamed to honor Queen Victoria’s 60th coronation anniversary.

The De Beers Diamond was extracted from the Kimberly mines in 1888, originally weighing 428.5 carats.

It was the most massive and the heaviest diamond to be found at the four operating mines in that period.

The exact location of cutting the diamond is unknown, but it is believed to have been crafted in Amsterdam.

At 234.65 carats (46.9 g), the De Beers Diamond is the 8th largest cut diamond and was placed at the centerpiece of a ceremonial necklace by the House of Cartier.

The Red Cross diamond is a bedazzling canary-yellow diamond from the South African Kimberly mines.

The gem was offered as a gift from Britain’s Red Cross Society to art sales held by Christies in London. The Red Cross diamond is 205.07 carats with a slightly visible Maltese cross in the facet, which explains its name.

The gem is valued at around $2 million.

It is a property of the De Beers and is externally and internally flawless with a pear-shaped outlook.

The Millenium star diamond was produced in 1990 in the Mbuji-Mayi district in the Democratic Republic of Congo. It was in a pile of alluvial deposits and weighed 777 carats in its original state.

Currently, it is valued at $100 million.