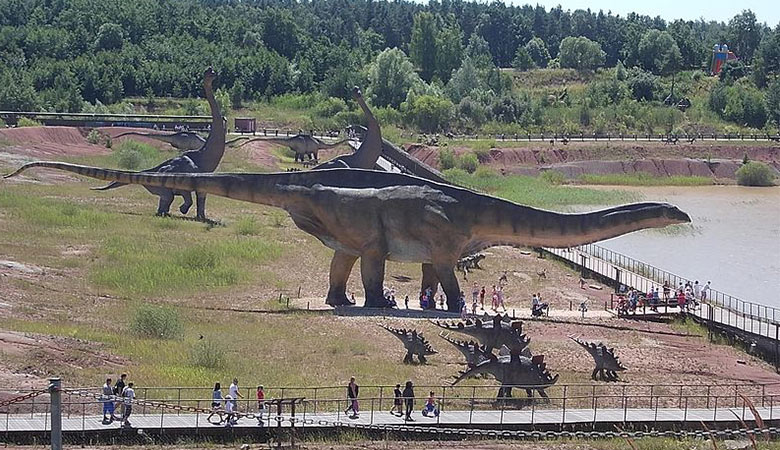 Dinosaurs have been a point of extreme curiosity, piquing the interest of many for years. Roaming the earth millions of years ago through many ages, dinosaurs have cultivated a fascinated following of people trying to answer the toughest questions surrounding these beasts.

From the smallest of creatures to the biggest animals, one can possibly envision, dinosaurs have originated multiple subjects devoted entirely to their existence alone.

As time goes on, people continue to engage in the paleontology that has led to all the different discoveries surrounding the dinosaurs.  From the fossils to the areas they roamed to the carbon-dating that has led us to discover how long ago it was that they lived here, many exciting facts and pieces of information continue to be discovered even to this day.

Called “Paralititan” for short, the Parlititan Stromeri was a giant titanosaurian sauropod. Weighing in at 20-59 tons, this giant dinosaur lived roughly 94-101 million years ago.

The Upper Cretaceous Bahariya Formation of Egypt is where the evidence of this dinosaur was discovered. Finding coastal deposits that aided in its discovery was the first sign of this reptile’s existence.

Joshua Smith was the leader of the team that discovered the Parilititan, and by his words, he had advised, “It was truly an enormous dinosaur by any reckoning.” This happens to be a dinosaur without a multitude of fossil discovery like other dinosaurs, but from what scientists have gathered thus far, we are able to determine the existence of this massive sauropod and at least piece together what it would have looked like along with its larger than life-size.

The Dreadnoughtus has the unique advantage of being the one titanosaur with the most complete skeleton that has been discovered. Estimated to weigh roughly 59 tons, this sauropod has two partial skeletons that have been discovered to confirm its existence.

The fossil discovery was made in Patgonia, Argentina in 2005. The Cerra Forteleza Formation in the Santa Cruz Province is where the dinosaur was discovered by Kenneth Lacovara, which is very recent for a dinosaur discovery.

It took Kenneth and his team four austral summers to fully excavate the area where Dreadnoughtus was discovered, due to its massive size. It wasn’t until 2009 that the discovery was moved out of the dig site and transported to be studied.

Lacovara chose the name, which means “fears nothing,” in an effort to give the herbivores their due for being the toughest dinosaurs in a habitat.

We get to head to the United States for the discovery of this next beast. Sauroposeidon Proteles has discoveries that have been made in the states of Texas, Oklahoma, and Wyoming. Again, having partial discoveries, this dinosaur has been partially pieced together to determine its size and weight.

This behemoth of an animal was believed to have weighed 40-60 tons. It’s believed that it certainly lived up to the meaning behind its scientific name, which is “earthquake god lizard.”

The fossils were found in rocks dating back to the end of the Early Cretaceous period, which was around the time the sauropod population among the North American continent had greatly diminished. It was actually the last-known sauropod in America before the group had vanished.

The Mamenchisaurus is a unique specimen in that its incredibly long neck made up half of the total body length. This dinosaur toted a weight of 75 tons. For the discovery of this creature, we head to China in the year 1952 at a construction site for the Yitang Highway.

Again, this dinosaur had an incomplete skeleton, but paleontologist C. C. Young (renowned in his profession) was able to properly theorize as to what the dinosaur looked like as a whole and how large it was.

Mamenchisaurus has multiple dinosaur species that fall into its category and have unique differences between them. But all species still fall into the sauropod category and all are similar in size as well as weight.

The Notocolossus is believed to have weighed anywhere from 45-76 tons. This dinosaur is considered a titanosaurian sauropod from the late Cretaceous period in the Mendoza Province of Argentina. There was another Argentinian dinosaur discovered a few years later called Patagotitan. But don’t confuse the two; they’re similar in a lot of ways.

In 2016, Notocolossus was named and described by Dr. Bernardo Javier Gonzalez Ringa in the Mendoza Province. He had also discovered the first fossils in Argentina, which became the initial discovery of the dinosaur. The first fossil that was discovered was determined to be 86 million years old.

“Titanic Giraffe” is the laymen term for this dinosaur. Between 1914 and the 1990s, Girafftitan Brancia was the largest dinosaur known to man. That would have made it the largest animal land animal ever in history until the top four dinosaurs on this list made their discoveries.

Also, being a sauropod, this dinosaur lived in the late Jurassic period and was actually originally given the African name “Brachiosaurus.” There is a skeleton mounted in Berlin to give spectators an idea of what the sauropod looked like. This dinosaur was discovered in 1906 by mining engineer Bernhard Wilhelm Sattler.

Apatosaurus, or “deceptive lizard,” also lived in North America during the late Jurassic period. Colorado, Oklahoma, New Mexico, Wyoming and Utah are the states where fossils have been discovered. Also being a sauropod, this huge animal is believed to have weighed in at 36-80 tons.

This dinosaur, Antarctosaurus Giganteus, was discovered in the part of the world that is now considered South America and is supposed to have weighed 68-80 tons. This titanosaurian sauropod lived in the Late Crustacean Period. German paleontologist Fredrich von Huene discovered the first Antarctosaurus fossils in 1929. The first time the dinosaur was ever mentioned in a publication was actually 1916, but the species had yet to be properly named.

Being classified as another sauropod, the Antarctosaurus also falls into the category of dinosaurs with incomplete remains. The only unfortunate characteristic of this species is that the remains that have been found are dubious. They seem to be properly categorized, but the incomplete remains make certainty difficult.

The Argentinosaurus Huincuslensis lived in the late Crustacean Period and weighed anywhere from 50-90 tons. It was a massive sauropod discovered in 1987 by a farmer in Plaza Huincul in Argentina. Although its another dinosaur with incomplete remains, it is believed that it was the second-largest land animal of all time.

This dinosaur also falls into the Titanosauria group, which was the dominant group in the time they existed. After its discovery, paleontologist Jose Bonaparte initiated an excavation in 1989 in search of other remains of the Argentinosaurus. Parts of a vertebrae and a sacrum were discovered in the search to help further determine what the dinosaur looked like.

The biggest dinosaur of all time is also the most difficult to pronounce. Weighing in at 100-150 tons, the Amphicoelias Fragillimus lived during the late Jurassic Period. This age was also known as the Tiothnian Period and took place roughly 150 million years ago.

Amphicoelias was another dinosaur that was discovered in America in the state of Colorado. Oramel William Lucas made the discovery in 1877. He discovered a number of fossils, which led to further excavations and more data to figure out more information about the species.

A lot of the species we looked at have incomplete specimens for scientists to determine what dinosaurs were like millions of years ago. As new discoveries are made, new information is added into the equation to update the facts. So, as time moves forward, some information can be subject to change.