The weight of one of the most watched sports is ever-changing. For decades, men and women have graced the gym floors throughout the world exhibiting artistic style and grace with their bodies.

Size and weight has always been a factor, with most gymnasts averaging 5’4” in height.

As we look at some of the heaviest female gymnasts in the world and their accomplishments, it’s something to see how the weight has evolved over the years.

Today, we’re finding female gymnasts to not be as heavy as the generations before them. But the accomplishments are just as great. 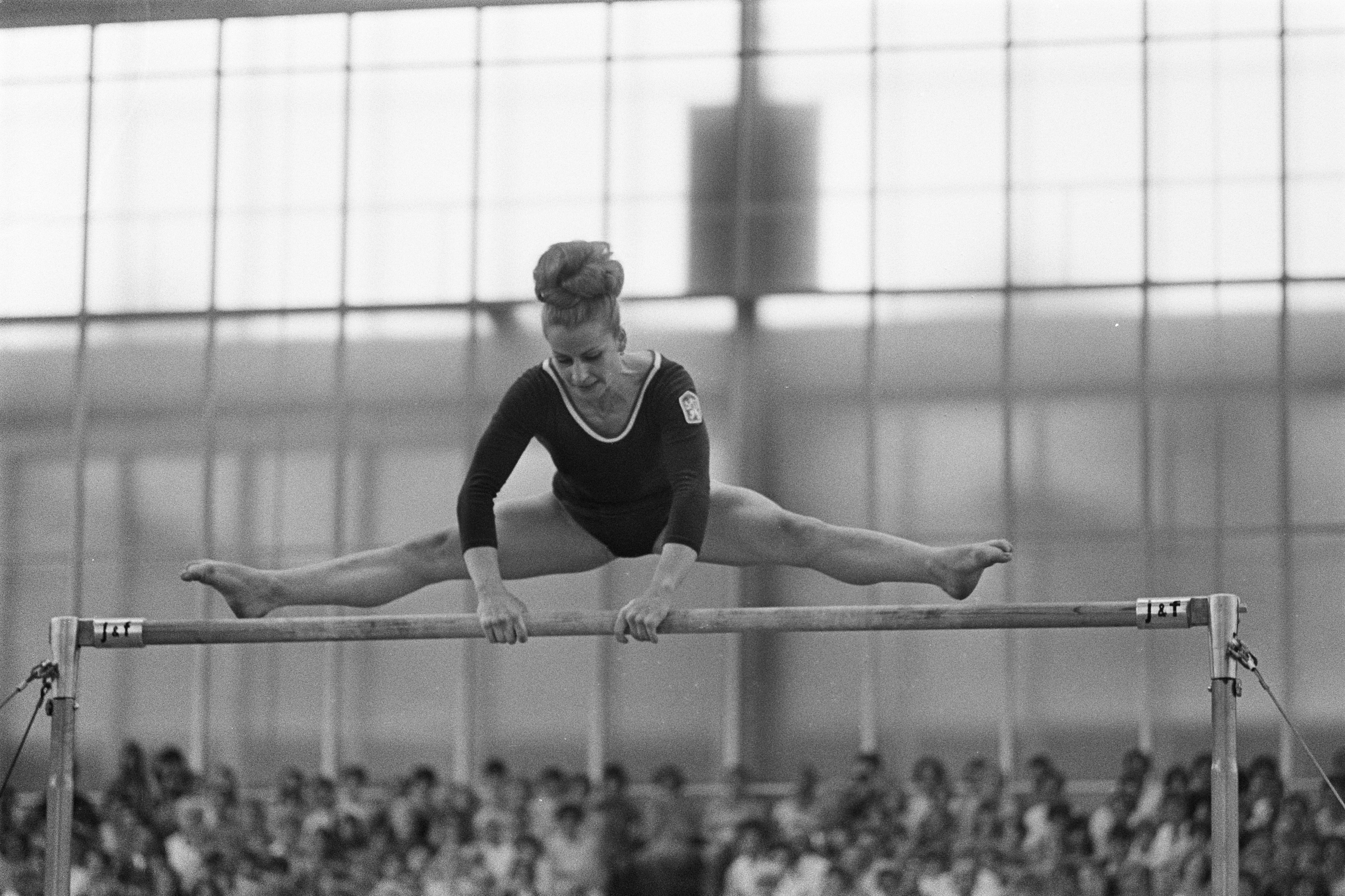 Věra Čáslavská was a Czechoslovak artistic gymnast who won a total of 22 international titles between 1959 and 1968.

She won seven Olympic gold medals, four world titles, and 11 European championships. She is one of two female gymnasts to win the all-around gold medal at two back-to-back Olympics (1964 and 1968).

She weighed 128 pounds. Věra is the only gymnast to have won an Olympic gold medal in each individual event. She died in 2016 at 74 years old due to health issues.

Ludmilla Tourischeva is a former Russian gymnast and nine-time Olympic medalist for the Soviet Union. She is one of two women to win four gold medals at a single World Championship (1974).

She weighed 115 pounds. Ludmilla has received numerous honors for her gymnastic achievements throughout her career, and in 1998 she was inducted into the International Gymnastics Hall of Fame.

Larisa Latynina is a former Soviet artistic gymnast who won 14 individual Olympic medals and four team medals between 1956 and 1964.

She weighed 115 pounds. She holds the record for the most Olympic gold medals by a gymnast (9).

Larisa retired after the 1966 World Championships and became a coach of the sport. She organized the gymnastics competition at the 1980 Olympic games in Moscow.

In 2008, Sophie helped the German team finish 7th in the European Women’s Artistic Gymnastics Championships and 12th at 2008 Summer Olympics. She weighed 112 pounds. She retired in 2012.

Sunisa “Suni” Lee is an American artistic gymnast. She is the 2020 Olympic all-around champion at 112 pounds.

Suni was also a member of the team that won gold at the 2019 World Championships and is a six-time member of the U.S. women’s national gymnastics team and the first Hmong-American Olympian.

Kylie Dickson is an American-born Belarusian artistic gymnast. Kylie competed for Belarus at the 2015 World Artistic Gymnastics Championships, which qualified her for a spot at the 2016 Gymnastics Olympic Test Event.

She competed for Belarus at the 2016 Summer Olympics and placed 58th in qualifications with a total score of 47.798. Kylie is 110 pounds.

Simone Biles is an American artistic gymnast, with a combined total of 32 Olympic and World Championship medals.

She is one of the most decorated gymnasts of all time. She won individual gold medals at the 2016 Summer Olympics in the all-around, vault, and floor, along with other medals.

She won bronze on balance beam, along with other medals at the 2020 Summer Olympics. Simone has had too many honors to note them all. Among them, in 2016 she was chosen as one of BBC’s 100 Women, in 2017 she won the ESPY Award for Best Female Athlete, and won favorite female athlete at the 2017 Teen Choice Awards.

In 2020 she was awarded the Laureus World Sports Award for Sportswoman of the Year, and in 2021 appeared on the Time 100 for the 100 most influential people in the world.

Yelena is a Russian-Canadian gymnastics coach and judge who competed for the former Soviet Union.

She was the women’s artistic individual all-around champion at the 1980 Summer Olympics in Moscow, where she won a gold and three silver medals. Her weight at this time was 99 pounds.

Yelena retired in 1982 and has since been coaching other gymnasts and serving as judges in various Olympic events. In 2007, Yelena was inducted into the International Gymnastics Hall of Fame.

Nastia Liukin is a Russian-born American former artistic gymnast, and the 2008 Olympic All-Around champion. She weighed around 99 pounds during her competitive years.

She is also a four-time all-around U.S. national champion, winning twice as a junior and twice as a senior. Nastia represented the U.S. at three World Championships and one Olympic Game. She retired in 2012 and is currently a sports analyst