Fish can be found in any large water body provided they can access food and breeding grounds to further their population.

The oceans tend to have the biggest fish population due to their sheer size, but freshwater bodies also have something to brag about.

When listing the heaviest fish in the world, most live in salty water, and only one or two might be from freshwaters.

For better comparison, it would help to look at some of the heaviest freshwater fish in the world and how they live.

The Beluga sturgeon is the heaviest freshwater fish that competes with others like sharks and rays. These sturgeons can gain over 2500 pounds in weight at around 24 feet long.

They are also the oldest fish to live on earth, claimed to have lived for over 200 million.

The Beluga Sturgeon is primarily fished for its Beluga Caviar, almost pushing the species to extinction.

The Largetooth Sawfish is also known as the Freshwater Sawfish and can reach over 25 feet long and weigh 1400 pounds.

This fish looks scary and has a rostrum for slicing up fish. They are endemic to tropical and subtropical waters worldwide, specifically South and Central America.

They spend their lives in freshwater but sometimes traverse oceans. However, they are pretty rare, and their sightings are limited.

The White Sturgeon is the second heaviest freshwater fish globally and in North America. They grow over 20 feet and weigh around 990 pounds.

These fish are covered with solid bony plates known as scutes, making them different from other fish with scales or slimy skin like catfish.

They tend to take after sharks with their internal structure of cartilage and not bones. This makes the fish flexible enough to glide in the water.

The Giant Freshwater Stingray grows to around 16.4 feet and weighs around 1300 pounds. This fish species is rarely known compared to its relatives that have been scientifically explored in all aspects.

This fish mostly lives in rivers, but they tend to swim into salty sea waters at times. Their numbers have significantly declined due to pollution that has ruined river habitats. 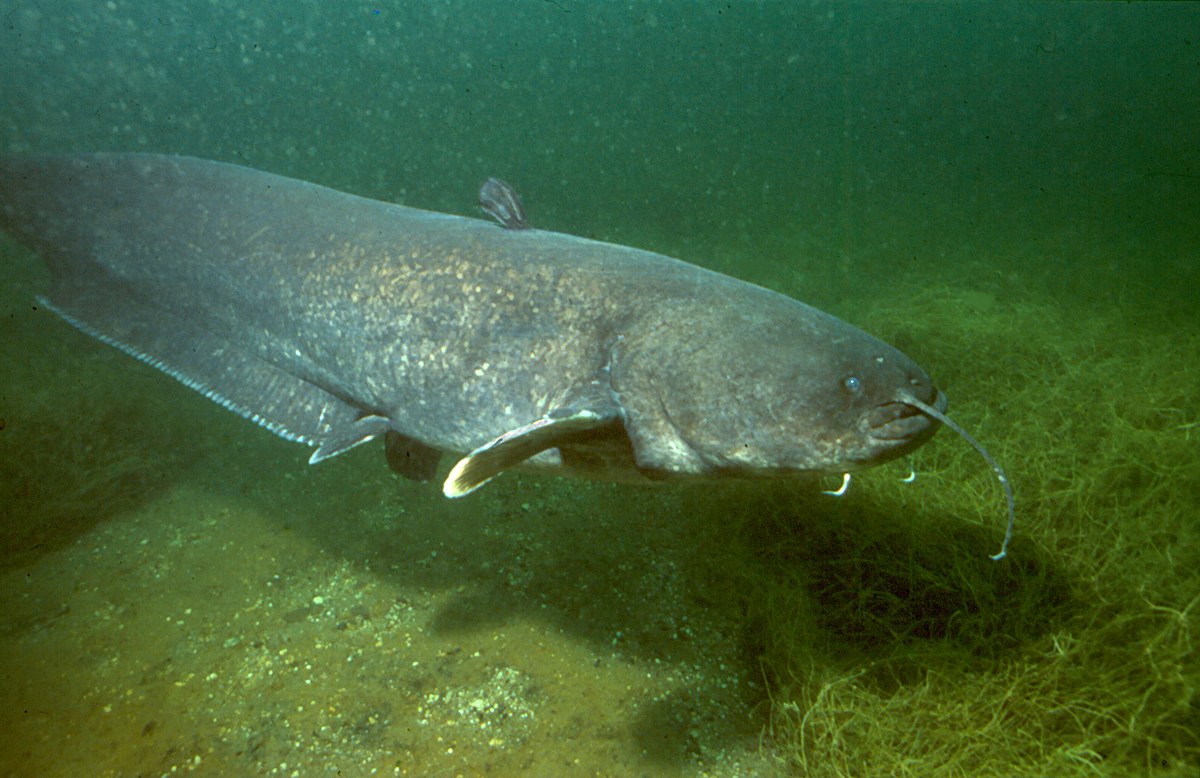 The Wels Catfish is pretty gigantic, which has earned it names like the Man-eating catfish, Ebro master, and European Man-eater. They can weigh around 660 pounds and are primarily found along river basins.

Despite being called man-eaters, this species mainly feeds on eels, crustaceans, other fish, and rodents. They feed through the gulping method, where they suddenly open their mouth to suck in the prey with powerful suction.

The Chinese Paddlefish is an endangered freshwater fish and among the most massive fish that habit freshwaters.

It weighs around 660 pounds and is specifically found in the Yangtze River in China.

However, this fish is considered extinct because there have been fewer sightings since 2003 resulting from the construction of a dam over the Yangtze River that destroyed its habitat.

Even though there could be other freshwater fish longer than the Mekong giant catfish, it ranks among the heaviest.

This Osteichthyes are the largest scaleless fish that call freshwater their home.

It weighs around 650 pounds stretching over 10 feet long. However, their population is rapidly decreasing due to deterioration of breeding points, overfishing, and the building of dams.

The Nile Perch is a well-known prolific breeder whose population can double up quickly.

These fish are pretty massive and can grow over 6 feet and weigh around 500 pounds.

This fish is considered an invasive species and has ruined the ecosystem in many regions. Its primary habitat is in the Nile, Congo, Lake Victoria, Lake Chad, and other African river basins.

This species was introduced to Lake Victoria to control “bad fish,” only to end up overpopulating the lake.

The Arapaima can be found in lakes around South America and weighs up to 400 pounds at 10 feet.

This species is believed to breathe above the water surface with a unique sound that would be confused for coughing.

They are also known for grabbing birds and fruits when they appear on the surface. Arapaimas feed on other fish by thrusting forward to gulp their prey with their vacuum mouths.

The Alligator Gar is another fish species found in the South American rivers, lakes, and estuaries.

There are seven types of Gars, but this is the most unique of all.

This fish weighs over 327 pounds and can grow over 10 feet. From a bird’s eye view, it gets its name from its unique bony head that resembles an alligator’s head.

They are less of a threat to humans, only that their eggs are poisonous and can kill when ingested.

The Bull shark is also called the “Lake Nicaragua Shark,” It spends most of its time in freshwater rather than in the ocean.

They grow to around 8 feet long and weigh approximately 290 pounds.

They are primarily found in African rivers, lakes, and estuaries. This fish is very aggressive and is considered a danger to humans.

The Siberian Taimen has a ravenous appetite that has earned it the name River Wolf.

This fish can grow over 7 feet and weigh around 230 pounds.

This species can live over 30 years which is enough time to grow to such massive lengths. It is also considered one of the oldest and largest salmon fish globally.

They are the living evidence of the close relation between trout and salmon.