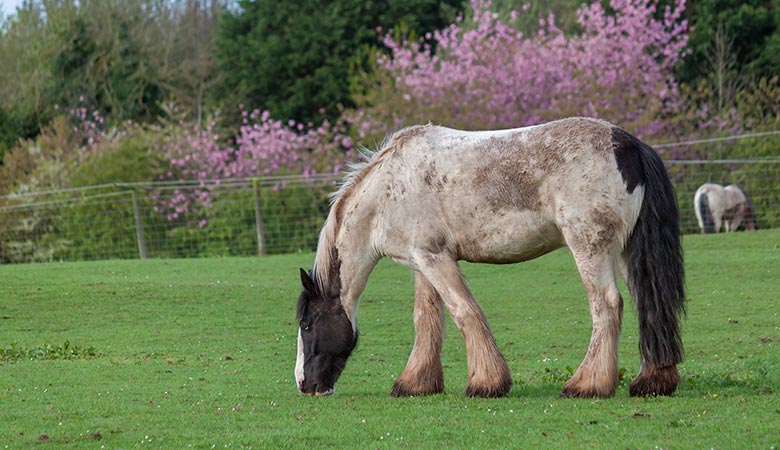 The typical horses you see on television weigh around 1,000 lbs (500 kg), but there are many special breeds of horses that make that look small.

These gentle giants weigh roughly the size of a small car in some instances and are many “hands” tall (the measurement used by horse owners for the height.) One hand is equivalent to four inches or ten centimeters.

Here are the 12 heaviest horse breeds in the world, from lightest to heaviest:

These are the horses you commonly see pulling loads, such as wagons and carriages, instead of being ridden. Because of their size, they have the strength and muscle mass, as well as the height, to work this way compared to other breeds. They’re also crossbred with smaller horses for a range of skills.

The Heaviest Horses in the World

What follows now will be more in depth information about these horse breeds. Remember though that each horse will reach a different size. This is why the average weights and heights of each breed are given instead of a set number.

These are certainly the shortest of all the breeds on this list, as well as the most lightweight. However, they’re famous now for their spiky, striped mane. This is another breed from Norway and is famed as one of the Vikings’ main choice in breeds.

If you’ve never seen a fjord in real life, you probably have seen them in Disney’s Frozen. They’re one of the shorter draft horses, their height typically falling under the official “pony” category by going below 14.2 hands. However, as the breed is considered a draft horse, they aren’t considered ponies.

Confused yet? Don’t worry, unless you’re in the circuit. You’ll rarely be scolded for using the wrong term when referring to them.

These come in various colors but are best known for a black and white piebald, meaning black and white spots with a white face. They’re also known for long mains and tails and feathering around the feet. Their stunning appearance makes them a favorite in the show ring.

Typically, they’re used for dressage or pleasure riding, as their upkeep can be intensive for other sports. For instance, races tend to pack the feathering around horses’ hoves with mud and droppings. For a gypsy vanner owner, this means hours of grooming every time.

Surprisingly, this is the most widespread breed in Norway today. A traditional Norwegian breed, there are two types. One is a lighter weight, the Dole Trotter, while the traditional Dole draft is much stockier and better for pulling work, whereas the Dole Trotter is mainly used for riding.

This breed is known for its signature black coat, long main and tail, and feathering around the hooves. Friesians are highly prized in the show ring for a variety of uses, including dressage, western pleasure and/or gaming, or showmanship, which consists of groundwork versus riding.

Just like with the American cream, it’s no mystery where this breed originated from. It was known to have great traction and be able to pull more than its body weight on average. Soviet troops bred a variety of breeds to get this result.

An odd thing this breed is known for is their milk, which they produce in abundance. This milk is then fermented and drunk as an alcoholic beverage. This was a favorite of Russian author, Leo Tolstoy.

The Dutch draft, from Holland, is another stocky, small yet muscular breed. Originally used for farm work, this breed has transitioned into the dressage ring, much like the American cream. It’s also used for breeding purposes like the Percheron.

They’re also the heaviest Dutch breed of horses or ponies. The ancestors of the Dutch drafts we see in the ring today were the heavy lifters of the world back then, doing most of the hard work.

This breed is truly American bred, with all of them stemming back to the same mare. She was born in Iowa, where the breed was officially founded as they bred her to nearby stallions. Her offsprings were known for their creamy, champagne colored coats, which quickly became desired for the show ring.

The American cream is primarily a show horse, rare but highly appreciated by show attendees. They’re beautiful horses, between their unique colors and good breeding.

8. Suffolk Horse, aka, the Suffolk Punch

Suffolk horses, also known as the Suffolk punch, are surprisingly heavy for their height. They’ve very short, squat, round horses. They’re broader in the chest and shoulders than the other on this list and are  known to grow “out” where other breeds grow “up.”

However, it’s important to note that the Suffolk is rarely an overweight horse. Instead, they have a very thick, muscular build. This is why they’re becoming popular for those looking to go back to the days of having a pulling horse over a machine.

The Belgian draft horse is the most popular draft horse in America, currently, outnumbering any other breed. While they can reach the same size as a shire horse, as you can see, they commonly stay in the lower spectrum with only occasional heavyweights.

They’re thought to be the most like the horses used in medieval times by knights going into battle. This is why they’re a common choice for renaissance riders, riders who like to safely imitate medieval riding practices.

You’ll probably recognize the Clydesdale horse by the infamous beer company commercials that run during football games, especially the Super Bowl. They’re famous for their size as much as their white, feathered feet.

Like the other breeds, the Clydesdale was used most to transport goods. It became famous for hauling beer, which probably doesn’t surprise you, as they still are famous for this! Like the shire horse, they’re still working at the same job, but with a lot more renown than when they were used daily.

The Percheron is only a bit smaller than the shire, standing roughly a hand shorter than shire horses. While shire horses are primarily still used to pull loads, albeit, for style instead of functionality, today’s Percherons are commonly bred to thoroughbreds for dressage horses.

Percherons came from France and were imported into America, where they were used extensively as work horses on farms before machines were widely used. It wasn’t until farming machines became affordable that the Percheron was allowed to retire from the farm life.

Not only does the shire breed claim Samson, the largest horse on record, as one of their own, but another gigantic shire horse also reached Guinness World Records by nearly reaching Samson’s record. His name was Big Jake, from Poynette, WI. He was a full hand too short to beat Samson, but earned the title of the largest living horse.

Just check out Samson among other giant horses in this video:

In general, males are larger than females. Some stallions reach up to 19 hands or, in Big Jake’s case, over that. They’re used mainly for pulling loads, as we did before we had trucks, or for riding. Many equestrians prefer the large breed’s calm nature over smaller breeds.