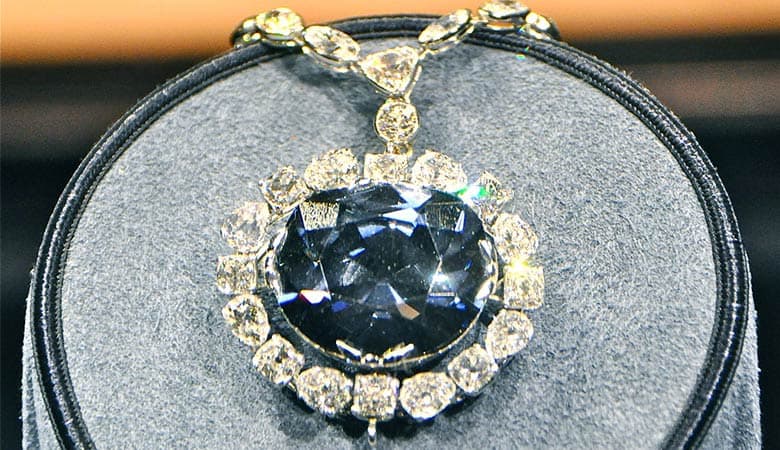 Since ancient times, people have marveled at the beauty of diamonds, sapphires, rubies, and other stunning collectibles we can find in the depths of our earth. Through the dangers of mining, people excavate these precious stones from which we form wearable jewels of femininity, wealth, and status.

There is such a rich history behind each of the largest gems in the world, what they sold for, where they are now, and how incredibly heavy they were!

The 15 heaviest jewelry pieces in the world from lightest to heaviest are:

Even when their excavators, forgers, and owners pass on, these massive jewelry pieces remain. In this way, they are timeless and eternal, carrying stories from all of the people’s lives they’ve touched. With each gem possessing a fascinating story, we will explore the key attributes, weight, and selling price of these captivatingly enormous jewels!

If any jewelry-lover hears the name, ‘Cartier,’ they instantly perk up with excitement!

The Sky-Blue Diamond is only 8.01-carats, which may sound small to you comparatively on this list. However, it sold for $25 million and is still one of the most recognizable diamonds that Cartier has ever released. With a reputation and famous roots like this, the Sky-Blue Diamond is anything but small.

This is the lightest piece on our list, so believe me when I say, you’ve heard nothing yet!

2. The Blue Moon of Josephine

The Blue Moon of Josephine, as beautiful as the name may be, harbors as dark a story.

It was purchased by a Hong Kong fugitive named Joseph Lau Luen-Hung as a gift for his daughter. His daughter was 7-year-old Josephine, for whom the diamond is named after.

He remains a fugitive, but the daughter cherished her diamond, and it is still owned by the family.

Felon or not, this loving papa spent $48.4 million to bring the diamond to his daughter and eternalize it in her name. At 12.03-carats, it is on record as the most spent per carat of any diamond in history.

This $57.6 million piece named after the creator himself, Oppenheimer, this gem is literally called, ‘the gem of gems,’ and is known by all jewelry experts.

For the massive size of 14.62-carats and an incredible price-tag, the Oppenheimer earns a rightful place on our list.

We can’t leave the 24-karat chain that Kanye adorned at the 2010 BET awards, which is one of the heaviest pieces of jewelry for any hip-hop artist to wear in history of performances!

No one knows exactly how heavy it was, but his neck did seem strained carrying such a heavy statement piece at the price tag of approximately $300,000.

You will hear Harry Winston’s name again in this piece as he owned not only the Hope Diamond but also the Graff Pink Diamond Ring.

Although the pink diamond by Graff is not as colorful as the Graff peacock, it is still incredibly lively and delightfully heavy! After leaving Winston’s collection 60 years later, it’s ended up at the Geological Institute of America, where it’s been named in the top 1-2% in diamond purity.

With so few gems falling into this category of purity, this $46.2 million dollar ring of 25-carats is undeniably special.

The Hope Diamond is one of the most famous pieces of jewelry of all time.

Weighing a whopping 45.52 carats, this antique cushion-cut featured facets and crowning along the girdle and fantastic stone-quality.

In has a hauntingly deep blue that feels a bit gray-toned in its depth, the blue diamond is surrounded by 16 white diamond while the chain boasts 45 diamonds.

With no precise value being placed on the Hope Diamond, it is undeniably worth hundreds of millions of dollars as it once was owned by the Collection of Louis XIV, then Harry Winston, and then to the Smithsonian by 1958.

The historic gem remains at the Smithsonian for everyone to enjoy for the last 62 years.

Selling for $71.2 million during a Hong Kong Auction, the Pink Star Diamond ring is the most expensive piece of jewelry ever sold.

The initial stone 132.5-carats and was trimmed down to around 60-carats once shaped.

Interestingly, the ring actually sold for almost $85 million until the initial bidder at the auction couldn’t pay his hefty bill, and the ring was passed on to the second-highest bidder of $71.2 million.

Graff is a British company and jewelry designer that makes our list twice because the brand has created much more than brooches. But who could’ve guessed that their stunning peacock creation of 1305 diamonds could even be created with such ambitious diamond-quantities?

Since Graff is regarded humbly as the ‘King of Diamonds,’ there is no guess as to why he wanted to challenge himself to such an ambitious design that would define a standard for all other brooches.

Weighing 120.81-carats and selling for $100 million, the main Deep blue diamond in the center alone weighs 20.02-carats, while the rest of the weight comes from platinum, white diamonds, yellow diamonds, orange diamonds, and green diamonds to create the dazzling bird of light.

If you thought you’d seen beauty so far, prepare yourself for the rest of this spectacular list.

This 163-carat Diamond necklace featuring emerald stones and diamonds is as heavy as it is beautiful.

With dense stones and a lack of hollow space, this jaw-dropper will certainly be heavier than expected but make your neck feel like a million bucks!

Actually, it will make your neck feel like $33.7 million bucks to be exact, selling for this rate in 2017.

A serious contender on our list as being the most fantastic heavy-weight, the 201-carat watch will do more than tell the time for you.

For the small price-tag of $25 million, the Chopard is a true statement piece in every sense of the word.

Created by forging together 874 diamonds of rainbow colors in rich yellows, bright pinks, and spectacular clarity, this time-teller is the epitome of a masterpiece. View pictures to delight your senses and see it to believe it.

The Miroir De L’Amour is named a reflection of love for a reason!

Considered the most-perfect pear-shape design in earnings to date, these stunners weigh 123.43-carats and pair modestly with the matching necklace, which only weighed 147.28-carats, together totaling 270.071-carats.

You’ll have to find them from their owner in Switzerland but build up your neck and ear strength by purchasing your own! The selling price to the Swiss purchaser was $18 million for the earrings set, and the Jardin D’isabelle matching necklace for $8 million.

If you thought those were impressive, be baffled by the Blue Belle of Asia, which weighs 392.52-carats and sold for almost $18 million in 2014.

Any expert jeweler will be able to tell you about the Blue Bell of Asia as it is one of the most infamous sapphires in the world. It used to belong to the Lord Nuffield in 1937, and it was intended to be a coronation gift for Queen Elizabeth during her ceremony in May of that year.

It mysteriously went missing, but it was discovered around the 1970s and resold in 2014. The purchaser was left anonymous, so no one knows where it has ended up today.

If you have $55 million lying around, you can purchase the 637-carat L’incomparable diamond necklace created by the Mouawad Jewelry company. For a long time, this was the most expensive jewelry-piece in the world, and there are 102 more-petite stones surrounding the main gem.

This flawless stones selected for this legendary piece were cut from a 407-carat stone into the smaller 102. Selling in 2013, the necklace was sold in Singapore.

It’s hard not to add chains to this list when 1,000-carats equals 0.44 pounds – and these chains weigh many pounds!

Jay-Z set records as one of the richest artists in the world, as a top producer, but also surprisingly as a top-weight jewelry owner by wearing his 11-pound gold chain around town.

Last but clearly not least, The Star of Taiba was officially deemed the heaviest ring in the world by the Guinness Book of World Records.

The size of The Star of Taiba is almost laughable, weighing an incredible 129-pounds – this is not a ring you wear!

Originating in Saudi-Arabia around the year 2000, it was priced significantly lower when the price of gold was at a mere $250 per ounce. With the value being around $1,500 per ounce today, it has certainly gained worth with experts estimated it to be in the million-dollar range.

The ring’s creator Taiba Gold & Jewelry had to hire 55 jewelry artisans to work for two months through 10-hour daily shifts to create The Star of Taiba! With all of the heart and soul placed into the creation, the owners do not plan on selling the ring, and therefore there is no precise listing price for the design.

Although it is not for sale, you can request a miniature version for sale that will be wearable, around $1,500 for an 18 karat or 21 karats gold ring (carets being for gemstones while karats measure gold. Not to be confused with carrots which you eat).

It is so impressive that people can create these works of art from the gems of our earth. How do these natural forms of real-life beauty inspire you?