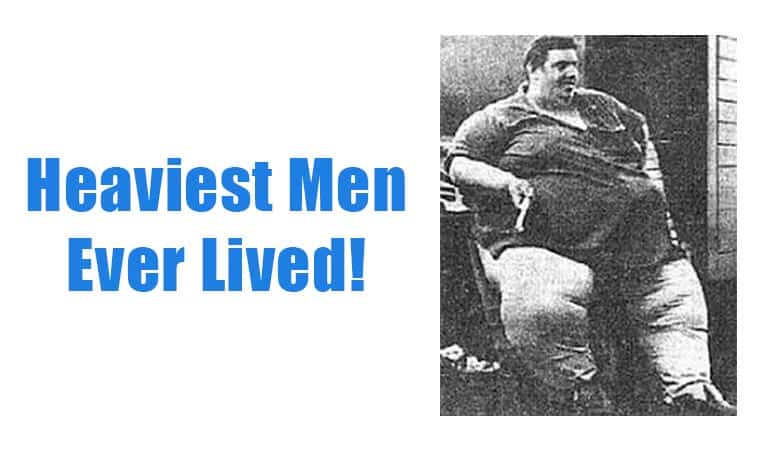 For the average man today, an extra pound is a daunting reality in this highly anxious world. However, for others whose life has been long plagued by obesity, getting to an average size is sometimes a far-fetched dream.

Here’s a list of the heaviest men in the whole world to have ever lived – and some are still alive!

Each of these heaviest men holds a story to tell. Their unique narratives are filled with health problems associated with obesity but also bravery and even happiness is intertwined to form incredibly fascinating tales. Read on to learn more about the world’s ten heaviest men.

According to the Guinness World Records, Jon Brower Minnoch is the heaviest man to have ever lived. His peak weight reached 1,400 pounds in March 1978, and no one has broken the record so far.

Jon struggled with obesity from childhood. He was unusually overweight but still strived to continue with normal life as a taxi driver and a father of two children.

Due to congenital heart failure, he suffered a couple of other conditions throughout his life, with edema playing a considerable role in his death. After dieting and losing some weight over the years, Jon died in 1983, weighing 798 pounds.

After Jon Brower Minnoch’s record had no close match for years, in 2013, Khalid bin Mohsen Shaari was reported to weigh 1,340 pounds. He hadn’t left his home in two years until the late King Abdullah offered to help the man lose weight.

After almost three years of treatment and close monitoring, Khalid managed to lose two-thirds of his body weight. Even better, he managed to walk for the first time in years using a Zimmer frame.

After an extremely obese teenage life, Khalid, now 28, weighs only 150 pounds. This transformation helped him get his life back and proved to be one of the most phenomenal weight loss records in history.

If you’d like to learn more of Khalid’s life and weight loss journey, you can check out the following video:

Born and raised in Mexico, Manuel Uribe was a chubby child, but obesity didn’t show up until in his twenties. In interviews, he vividly recalls how he couldn’t stop eating junk food while spending most of the day sitting in his day job when he came to the United States.

So, to change their lifestyle and hopefully reduce Manuel’s weight, he and his wife moved back to Mexico. However, his state deteriorated. He accumulated weight to 1,245 pounds when he made a desperate plea to be helped in a slimming mission.

Doctors, dieticians, and other experts offered their help and helped him lose 200 pounds within a few months. He went further and lost 496 pounds within two years.

The highest weight ever recorded for Manuel Uribe was 1,316 pounds. He died in 2014 a lighter, happier man. The following video is a documentary of Uribe’s life:

Robert Butler’s highest weight ever recorded was 1,200 pounds. He was struggling with depression, which prompted overeating and further escalated his weight from 899 pounds in 2006 to his peak weight in 2015, which marked his death.

Michael Hebranko is one of the heaviest men who tried again and again to lose weight. He kept trying and relapsing, each time making tremendous progress but falling back into overeating for days on end.

As Michael Hebranko narrates his weight battles story to Oprah, he reveals that he doubts gastric bypass surgery would have worked for him. The reason for this, he says, is that the urge to eat never came from his stomach but his mind. So, unless that part of the brain was fixed, he could never recover.

With help from fitness experts like Richard Simmons, Michael managed to lose hundreds of pounds every time he tried. He died in 2013 at age 60 and recorded a peak weight of 1,100 pounds.

You can see more of Hebranko’s long and challenging life here:

With a waist confirmed to be the longest ever recorded, Walter Hudson was once the fattest man in the whole world. He’s also the sixth heaviest person in medical history with a peak weight of 1,197 pounds.

Walter was naturally heavy, and during his early teens, he gained so much weight that he started spending most of his time indoors, which resulted in even more weight gain.

Although he lost some weight a couple of times in his life, he gained it again and died of a heart attack at the age of 47. The Hempstead Fire Department had to cut a hole in the wall to extract his body.

Although not much is known about Robert, the tragic death because of his obesity is quite familiar. As a child, he experienced whooping cough, which wasn’t treated and spoiled his pituitary gland. This gland affects growth, and his parents noticed his abnormally fast growth.

When he grew fast enough to cause alarm, the parents sought medical assistance, and it was revealed that the condition couldn’t be fixed. So, Robert grew rapidly, weighing 225 pounds at age seven — making him stand out in the whole school.

In Fishhook, Illinois, where Robert spent most of his life, locals treated him kindly. He later died of congestive heart failure at the age of 32, weighing over 1,000 pounds.

With a peak weight of 1,032 pounds, Kenneth Brumley was once labeled “Half A Ton Dad” since he is a father of four children. Although naturally predisposed to gaining loads of weight, he wasn’t that big or inactive as a child.

He used to play baseball, basketball, and American Football as a kid, and that kept his weight in check. But that changed when he moved to California at 19 and abandoned sports. Fifteen years later, his weight gain had escalated so much that he was bed-bound.

When Kenneth was accepted for gastric bypass surgery in his late thirties, his house had to be brought down partially for his bed exit. After some of the treatments that made him lose hundreds of pounds, Kenneth no longer popped in the news frequently. However, he lives as one of the heaviest men ever recorded in medical history.

Now former world’s fattest man, Juan Pedro Franco, once weighed 1,312 pounds. After more than ten years of imprisonment in his own body, Juan managed to go under several treatment procedures that helped him lose enough weight to be able to walk again.

After an injury when he was 17, Franco’s weight spiraled while coupled with a myriad of health issues, including diabetes, lung damage, and high blood pressure. He was named the world’s fattest man in 2017 by the Guinness World Records, but instead of shying away, he turned his life around by losing lots of weight within three years.

With his highest weight ever recorded being 1,072 pounds, Patrick Deuel was one of the heaviest men to have ever lived. He accumulated most of the weight after staying at home for seven years in a row.

After gastric bypass surgery and dieting, Patrick managed to lose about 660 pounds. However, after some time, he began gaining weight because of his inability to resist eating lots of calories. He died at the age of 54 while still morbidly obese.

While all these men are featured on the same list of heaviest men to have ever lived, they all led much different lives. It makes you think twice about the struggles of someone that is overweight!