When the sport started, basketball was played using a soccer ball and dribbling wasn’t allowed. The players were majorly lean and swift and like today, it takes a lot of endurance and competence to be on an NBA team.

As the game evolved, the players became sturdier and now even use their weight as a weapon to block and bypass the opposing team.

Today, let’s look at some of the heaviest NBA players of all time.

When Miller joined the NBA, his weight was 120kg, but he gained weight throughout his career. He had an 18-year career where he played for a different team every season and in other leagues.

O’neal got his first title in 2002 with the Lakers, and in that year, he put on weight to 155kg due to laziness. So, Shaq is placed second as the heaviest, reaching 348 pounds with a height of 7ft.

Despite his weight, he stayed healthy throughout his career and left after a severe Achilles tendon injury.

Although Sim is massive, he impressed people with his good performance in 2014. He was drafted, but late on, he went undrafted. Sim is signed and plays for Sacramento Kings to play in the NBA summer league.

After high school, Curry was taken by the Chicago Bulls in the 2001 draft and was a promising player.

By his tenth season, however, he had already shown signs of obesity and had ballooned to around 400 pounds. Because of his weight gain, Eddy abandoned his career because his weight wouldn’t let him perform.

In 2021, Eddy joined the Miami Heats and played their position after losing 100 pounds. At this time, he was in the best shape of his career.

Michael made it to the NBA in 2003 after completing his university studies. He was taken by the New York Knicks and weighed 260 pounds then.

Sweeny fought and struggled to play the matches, but in 2019 he became an assistant coach. Presently, Michael is the head coach of the Girls Varsity basketball team. 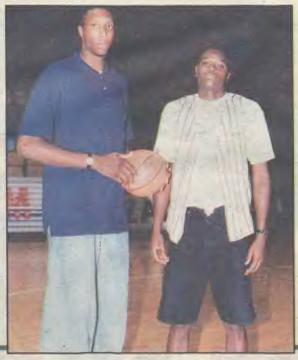 Priest Lauderdale is an American Bulgarian basketball player. He played for Atlanta Hawks in the 1996 NBA draft and weighed 325 pounds (147kg), standing at 7ft 4inches. However, his career in the NBA was short as he played from 1996-1998.

Kevin Duckworth played as a center in the NBA league and was 7ft tall.

In his fifth NBA year, his average points were 18.1 and 8.0 rebounds per game. However, as Kevin got older, he gained weight, and his performance went down.

Robert, famously known as “Tractor,” was picked for the NBA in the 1998 draft. People had high expectations of him, but that never came to be.

When he joined the NBA, his weight went out of control, and he only played for seven seasons. By the end of his career, Taylor weighed 319 pounds (145kg).

Garth was a player in the Dominican National Team and played only four matches in the NBA.

He only played in the 2000-2001 season. Garth weighs 315 pounds, and his height is 7Ft 4In. Despite him being a heavy NBA player, he played great international-level matches.

Yao Ming is ranked fifth in the tallest all-time NBA players. However, he has also made it to the list of the heaviest players.

Yao struggled throughout his career as weight caused him physical trouble. He weighed 310 pounds, but it didn’t deter him from having an outstanding but short career.

Muresan is a retired Romanian and played for only two teams in his career. He is 7ft 5 In in height and weighs 302 pounds (137kg). However, in his career, he won the most improved Player award in 1995-96.

Despite his commitment and passion, he had to stop due to physical problems related to his stature. In addition, he suffered from pituitary gland disorder that ended his career early.

Basketball is a sport that is evolving. In the past, most players were heavy, but now the trend has changed. Today, players are not heavy to keep up with the speed of the game. Although these players might be the heaviest of all time, some of them were the greatest players in their time.