If there is a place that has seen fighters of all sizes and shapes, it is the Octagon. The stage has been home to various UFC and MMA giants who have significantly proven what their weight is worth.

Weight plays a significant role in the sport, giving an advantage for a player to win, but only if the fighter is skilled enough. Here is a list of some of the heaviest MMA fighters to ever fight in the UFC and other divisions.

Emmanuel Yarbrough is by far the heaviest, largest, and biggest UFC fighter ever. Before his death, he held a Guinness World Record for the heaviest living athlete.

When he participated in his pioneering UFC fight, he weighed a dumbfounding 616 lbs. (279 kg), standing at the height of 6’8.

Unfortunately, he lost the fight since he could barely move. Before his demise, he weighed approximately 884 pounds, which is about the same weight as these large animals at 900 pounds.

Despite his short stature of only 5’11”, Butterbean is known as one of the heaviest MMA fighters in history, with a scale reading of 425 pounds (192 kg).

Before joining the MMA fight, he was a professional boxer, but unfortunately, this did not help him win the MMA fight against Genki Sudo. He, however, went on to become one of the Super Heavyweight Champions in the Elite-1.

Teila Tuli is a respected name in the world fighting scene, and he is well-known in the UFC/MMA arena, despite fighting once in his entire career.

Tuli was initially a sumo wrestler and fought his first UFC fight in 1993. Tuli’s lack of mobility denied him the chance to win his first match, standing at a 6’2″ frame and weighing 415 lbs. (188 kg).

Tuli weighed as much as 450 lbs in his sumo and wrestling career, making him the second-heaviest UFC fighter.

Thomas Ramirez is known for having the shortest MMA career and being the third heaviest fighter ever. In his first UFC match, Thomas weighed 410 lbs. (168kg) with a height of 6’1”.

Unfortunately, he lost to Don Frye after being knocked out in only eight seconds. That was the last time he ever fought in MMA.

Before the UFC imposed weight restrictions for MMA fighters, it was easy for fighters like Jon Matua to fight in the Octagon.

At a height of 6’2” and weighing 400 lbs. (181kg), Jon only fought once in the UFC, but this did not stop him from becoming popular. He also lost his debut fight to Frank Abbot with a brutal knockout to the UFC highlights.

Koji is among the MMA fighters to ever fight in the UFC only once. He debuted in the UFC 9 against Mark Hall and lost the match with a broken nose.

Before making his way into the UFC, Alexandre was a professional Judoka.

The Romanian giant ranks among the heaviest and largest UFC heavyweight fighters ever, weighing over 364 lbs. in his opening UFC match.

Also known as the ‘Bihor Mountain,’ Alexandre has won 16 times from 21 fights, and even though he may never be a heavyweight champion, he will be remembered for being one of the biggest.

Tim Sylvia was one of the heaviest and biggest MMA fighters who knew how to maximize their size advantage.

Standing at 6’8” and weighing roughly 310 lbs. (140 Kg), Tim broke the pattern of giants losing their first matches and went on to have a UFC title.

He mostly fought in the super heavyweight before he was forced to withdraw from the fight in 2015 when he was declared “dangerously obese,” weighing over 371 lbs. (168 kg).

Brock Lesnar is undeniably the most popular MMA fighter to make it to this list. His exceptional talent in the ring, combined with his impressive physique, has seen him defeat some of the dreaded opponents.

At the height of 6’3” and weighing over 286 lbs., Lesner is one of the heaviest MMA fighters. Even though he has not fought in the UFC, he is a five-time WWE champion.

Stefan Struve remains to be the tallest fighter ever in the UFC at 7 feet tall.

Besides being the skyscraper of the Octagon, he also packed some weight, making him one of the heaviest too. At 280 lbs. (127 kg), Stefan made his opponents look minuscule, giving him a winning advantage in most of his matches.

Although he does not have a UFC belt, he got post-fight bonuses after his career. 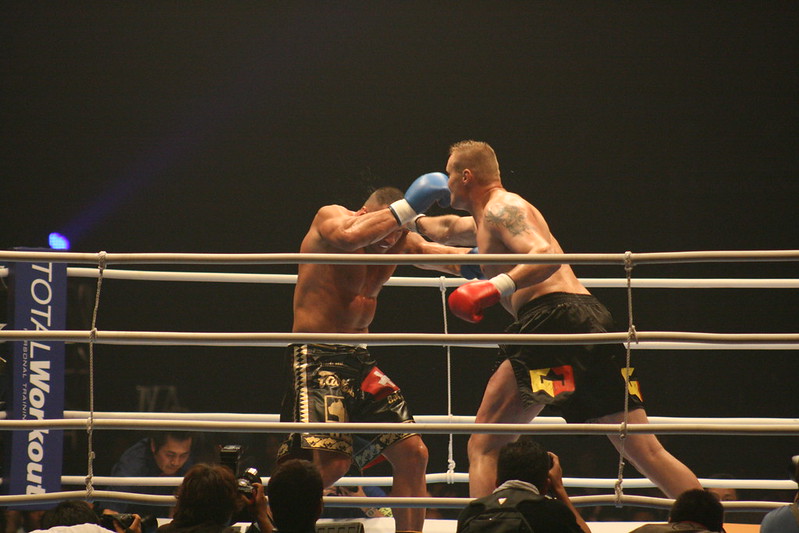 Semmy Schilt made a name for himself for being a great kickboxer, and his prowess in MMA fights saw him compete in the UFC.

He is also the second tallest UFC fighter and among the heaviest, weighing over 255 lbs. (116kg) during his career.

Semmy Schilt had a good run in the UFC, marked by a great loss and a win. When he went back to kickboxing, he weighed over 290 lbs. (132 kg).

Gan was not called “The Giant” for no reason since he had the physique to qualify as one.

He lost his first match in the UFC to Tim Sylvia, who later tested positive for steroids, but it was too late for a second chance.

While there are many UFC/MMA fighters not included in the list, these are the ones who broke the scales. Here we have the tallest and biggest, all falling under the heaviest UFC fighters ever. Besides their weight, it is always amazing knowing some facts about some of the heaviest sportsmen ever to live.