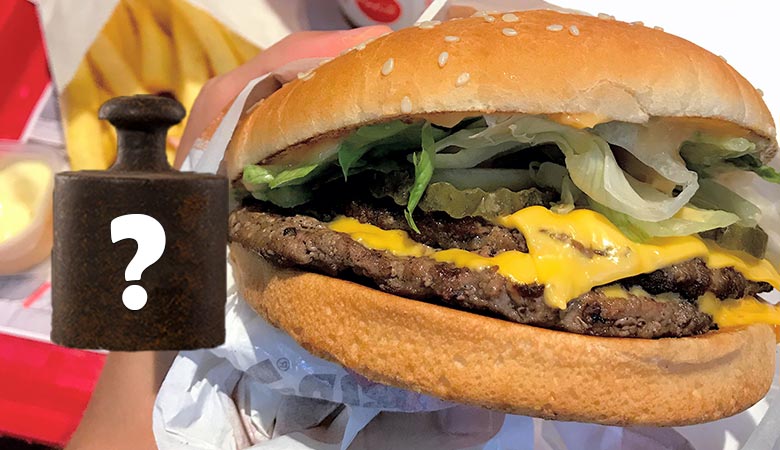 When thinking about household fast-food chains, Burger King is a go-to favorite for many. And while menus and websites all list calorie counts and nutritional value, it’s not so easy to identify how much a classic Whopper, or maybe a Rodeo Burger, weigh.

While there isn’t a huge weight variation some of these Burger King staples, some of them definitely weigh more than you would expect. (A Big King XL has how much meat?!) Currently, the menu includes 15 different burger variations. For clarification purposes, when we talk about the weight, we are referring to the weight of the patty, not including buns and toppings.

Below is a comprehensive list of all of Burger King’s burger offerings and their respective weight.

The Big King XL was introduced to the fast-food conglomerate in 2019, originally intending to troll it’s competition. Big King is the Burger King version of McDonald’s Big Mac. And its XL title holds true; while a Big Mac has less than 8 ounces of patty, the Burger King dupe contains a mean 8.8. oz. of meat.

A Burger King staple, the Whopper, though filling, weighs in at around 4 oz. It doesn’t sound like much when you compare it to a Big King XL, but it is still a quarter pound of meat.

Whoppers have been around for over 60 years, and when they first came to market, they cost a whopping 37 cents. Walk into a Burger King today, and it would cost you a little over $4. That’s right, what could buy you 10 Whoppers in 1957 could only buy you one today. Talk about inflation!

Impossible™ burgers have become increasingly popular, what with its adoption into fast food chains like Burger King and White Castle, and an ever-growing population of people who are adopting vegan lifestyles. This rendition of the Impossible™ burger weighs in a bit heavier than its meaty counterpart at around 4.4 oz.

Impossible™ burgers have been widely adored, as they are a meat substitute that doesn’t necessarily taste like a meat alternative. It has more potassium and calcium than meat and does not have cholesterol. Essentially, it has added benefits nutritionally while helping conserve the environment. It’s a win-win, and it’s hard to know whether your Whopper is Impossible™ or meat!

A Bacon King contains a half a pound of beef (8 oz.) with a stack of bacon on top. This burger made its debut in 2016 and has been a well-loved addition to the menu ever since.

While it is known to be super tasty, it has been deemed one of the unhealthiest sandwiches in the fast food world. It’s a “diet demolisher” that has over 1,000 calories. For anyone conscious of Weight Watchers points, this guy will cost you a lofty 38 of them.

A single Stacker King contains just one ¼ lb. beef patty. At first, it seemed unclear as to what made this different from a bacon cheeseburger, and then we found the secret: Stacker Sauce.

Stacker Sauce is a typical mixture of ketchup, mayo and relish. These are the base ingredients for most fast-food “house” sauces. However, many have tried to recreate this at home and it is said to have rosemary and a hint of celery flavoring, making it different from the secret sauces you might find at Freddy’s or In-N-Out Burger.

A Double Stacker King doubles up on its less meaty friend, with two ¼ lb. patties.

The Stacker King line was introduced to the chain in the early 2000’s, and could be customized with up to four beef patties. When they relaunched the line, they lessened the options and increased the size of the patties, allowing for all of the filling flavor with fewer choices to make at the drive-thru window.

The Double Whopper includes two regular ¼ lb. Whopper patties. With a half-pound of meat, the Double Whopper is a great alternative for someone hungry enough for a Big King, but who crave that classic charbroiled Whopper flavor.

The Double Quarter Pound King also has 8 oz. of meat, making it another great option for someone craving… well, a fairly large burger.

This burger, similar to the Big King XL, was part of a marketing effort to directly compete with McDonald’s. This was Burger King’s response to the release of the Double Quarter Pounder that their rival had just dropped in 2018.

The patty on a Whopper Jr. weighs in at around 2.2 oz., making it about half the size of its bigger, meatier brother Whopper.

Fun fact: The Whopper Jr. only exists because a store owner in a Puerto Rican Burger King didn’t have the correct size bun molds for a standard Whopper. So, he downsized, and eventually the Jr. became a menu staple. Now customers can have all of that Whopper taste without getting too full or eating all those Whopper calories.

The Bacon Double Cheeseburger contains about 4 oz. of beef. While Burger King has tried many burger combinations including bacon and cheese, this one is the only one to hold up. Many similar burgers have come and gone, but the Bacon Double Cheeseburger has held up since 1982. Ringing in at a quarter of a pound, it is a popular item that is as tasty as it is affordable. At just a little over $2, this burger is arguably the best bang for your buck.

The Double Cheeseburger is rated highly on a lot of fast-food-review oriented food blogs. While it only has around 3.4 oz. of meat (meaning each patty comes in at less than 2 oz.) it still packs a ton of flavor and remains a fan favorite.

The Bacon Cheeseburger weighs in at just around 2 oz. of beef. This sandwich is a basic staple of most fast-food chains, and compared to its competition, this 2 oz. patty seems like a standard weight for this item across the board.

A basic cheeseburger only contains 1.7 oz. of meat. As a value meal VIP, this selection has been widely critiqued and compared to the basic cheeseburger at McDonald’s. While the jury is still out on which cheeseburger reigns supreme, the consensus seems to be that it’s $1 price tag is appropriate for what you get, which is not even 1/8 pound of meat.

The Rodeo Burger also has 1.7 oz. of meat. This is included on some menus, but it also appears that it can only be ordered as a “secret menu” item where you just ask for onion rings and BBQ sauce on a traditional cheeseburger.

While there have been larger renditions of this, with the same aforementioned ingredients stacks between a few patties of meat, this seems to be the only rendition that’s stuck around due to customers’ ability to order it at a value price.

And, last but not least, the regular hamburger also contains just under 2 oz. of meat. Possibly the least popular menu item unless you’re a picky-eating, small child, the plain hamburger doesn’t have a whole lot going for it when you look at all the other options. Still, this classic staple is always there when you need something small and simple and cheap.

Burger King has quite an array of options when it comes to its burger weights. One thing is for sure: whether you’re hungry for over a half a pound of meat, or just need something to hold you over during a lunch break, Burger King has it all. With varying price points and value meals for even the hungriest, it’s safe to say that the wide range of options can satiate the hunger of even their most carnivorous customers.