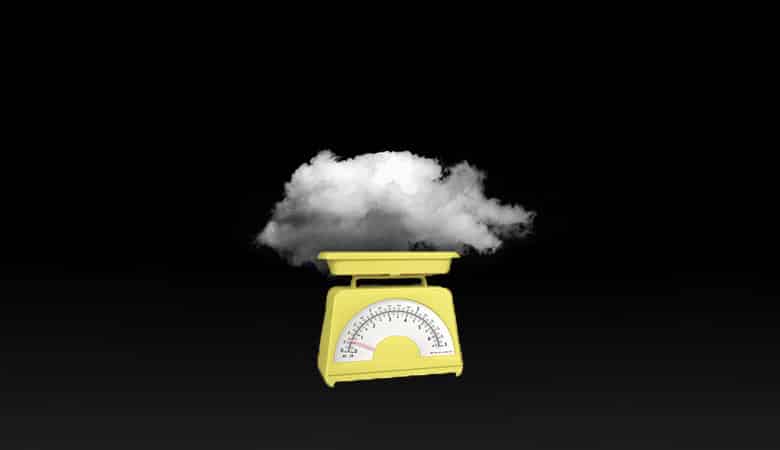 If you have ever spent any time outdoors, you’ve likely looked up at those big, fluffy clouds floating above you. Maybe you have tried to identify shapes in them, or perhaps you have wondered how much those floating cotton balls weigh.

How much do clouds weigh? Though there is some variation between types of clouds, a 1-kilometer cube cumulous cloud would weigh about 1.1 million pounds. That is a lot of weight for something that just floats in the sky!

Step up to the Scale

Clouds are hanging around in the sky, so how do we weigh them? We can’t place them on a scale of any sort, so we must know more about the cloud and how it is made in order to get our calculations in order.

In the Peggy LeMone, a meteorologist and cloud researcher who worked with US National Center for Atmospheric Research, started experiments with calculating cloud weight in the 1990s. She knew that the cumulus clouds were, on average, around a kilometer cube. This makes them a great starting point for some more straightforward math.

The first step is knowing how dense your cloud is. The water density of our favorite fluffy shaped cumulus clouds is about a half a gram per cubic meter. If you condensed that, it’s around a marble size amount of water in the space of a large closet.

Next is figuring out the size of your cloud. LeMone did this by driving through her clouds’ shadows and measuring the distance on her odometer. After she did some math, she found the answer that gives us the 1-kilometer cube average for the cumulus clouds.

This means that the cumulus cloud is about one billion cubic meters in volume. After the quick math, that’s 500,000,000 grams of water, 1.1 million pounds, or 100 6-ton elephants if you would like a visual reference!

Heavyweights: Storm Clouds and a Hurricane

Peggy LeMone gave a little more information in her research. To express just how massive clouds are, she included the weight of a storm cloud and a hurricane. Remember, these numbers are for the weight of the water alone and do not include the dust or other particulates that can be swept up to add to the cloud.

A storm cloud carries much more water than a cumulous cloud. A Stormcloud measuring about 10 times longer and wider than the cumulus would weigh 2.4 billion pounds or 200,000 elephants.

A hurricane is a truly massive storm that brings incredible power and amounts of water with it. A hurricane the size of Missouri, for example, would cover nearly 70,000 square miles, which is the average size for a hurricane. It would weigh 480 billion pounds or a staggering 40 million elephants!

That amount of water could fill over 87,000 Olympic sized swimming pools!

Since clouds are not all the same, it stands to reason that they won’t weigh the same. However, because of the uniform nature of the cumulus clouds, they are much easier to measure than the other types of clouds. So, what are the differences between the different clouds?

Cirrus clouds are the feathery, wispy clouds that look like hair blowing in the wind and are made up of ice crystals instead of water particles. They can be several kilometers tall and be long enough to stretch across entire continents.

Because the ice crystals vary in size and density, it is difficult to find an average on their overall weight. However, they will be far less dense than cumulous clouds, making their weight lower at the same cubic size.

Cumulus clouds are the big, fluffy clouds that we love to find shapes in. They have a more regular form, which makes it far easier to obtain an average size that is easy to calculate.

Stratus clouds are the lower clouds that form a white to grey blanket. These clouds may form a light rain or snow, but they are essentially an above-ground fog that makes for a gloomy sort of day. They will be a little denser than the cumulus clouds, but pretty close overall.

These are your Rain and snow clouds. They are very fluffy, like the cumulus clouds, but come with a lot more moisture to share with all of us on the ground. These clouds will be much denser than any of the other main types, and their size ranges wildly.

It’s also good to note that different types of clouds can mix, creating formations like the cumulonimbus or nimbostratus clouds. Cumulonimbus clouds are also known as thunderheads. These massive clouds stretch throughout all the cloud layers and often bring massive amounts of rain, lightning, and hail.

How Do Clouds Form, or How Do 100 Elephants Stay in the Sky?

As you just read, there are many types of clouds, and each of them acts and form a little differently than the next. The principles behind cloud formation and their gravity-defying floating are the same though.

Clouds are made up of water vapor. They form when warm air pushes moisture into the atmosphere, collecting more and more water vapor as it goes.

As the water vapor rises, it begins to cool and collect with other water and other particles, forming cloud condensation nuclei. Increasing water particles add to these collections, creating the different clouds we see in the sky.

It may seem odd that these incredibly small water droplets float, but they are less dense than the air underneath them! When you carry less weight and get a boost from warm air, you get to float on the breeze.

Condensation is more evident when it forms on a cold glass of water on a warm day. It is a little less obvious when it happens in the sky. Water vapor condenses, but is still in incredibly small droplets, and uses heat to create a cycle.

When water turns from liquid to gas, it collects heat and moves it away. When it turns from a gas to a liquid, it brings the heat in. So, when the water in a cloud condenses, it creates more heat, which causes the very updrafts that keep it afloat.

For a short, fun video explanation on cloud formation, check out this link.

If you’re ever on a hike or picnic, enjoying the clouds with friends, you’re equipped to talk about more than how they look like bunnies, elephants, or dragons. And if a friend or kid asks you, “How much does a cloud weigh,” You have the unexpected answer!