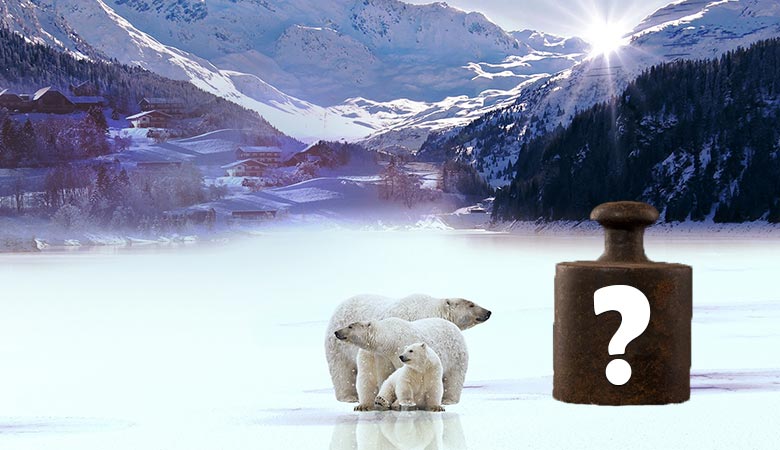 Polar bears are the most intriguing, lovable, and easily recognizable animals on earth.

These furry creatures are the largest land hyper carnivores and stand at the top of the Arctic food chain. This fact can make you wonder about their weight since their indigenous home is frozen. Well, even among all the bear species, the polar bear stands out as one of the heaviest and tallest thanks to the huge fat deposits under their skin.

Even though it is the sister species to the brown bear, it has evolved and adapted to a narrower ecological environment with many of its body characteristics made for cold weather. A great example of this is the fat deposits, large furry feet with short, sharp, stocky claws for walking on ice and hunting seals in icy open water.

Seals make up a big part of a polar bear’s diet and are a big reason why polar bears weigh so much. However, their weight can also vary depending on many other factors such as gender, season, and age.

The polar bear is amongst the most dimorphic animals in the marine world as the contrasts between the male and female species go beyond having different sexual organs. These differences can include size, weight, color, behaviors, and so on.

Surprisingly, during pregnancy, sows can put on a lot of weight rivaling their male counterparts. They can weigh up to 1,102 pounds (500 kgs), almost double their body weight.

Sows become sexually mature by the age of six, and soon after, they start gaining weight because of pregnancy. However, the extra weight is not because of the cubs but because of the extra fat deposits they store. This is because they can go months without eating and must have these fat deposits to help them through this period. They only leave the den during the spring.

The weight of any living organism changes as it goes through life, and a polar bear is no exception as it grows older and matures, its weight increases. After mating in April or May, the fertilized egg remains suspended and doesn’t start developing until August or September. It’s in these four months that sows eat copious amounts of food doubling in weight.

In the wild, polar bear cubs weigh anywhere between 1 and 2 pounds (0.5 – 1 kg) and are born anywhere between November and February; however, those born in captivity might be delivered early.

Each litter averagely has two cubs, and even at birth, sows are smaller than boars. Despite females putting on so much weight during pregnancy, cubs are born lightweight. These extra weight deposits help sows produce fat-rich milk. This diet helps them rapidly add weight to about 25 to 35 pounds (11 – 16 kgs) in three to four months. For the next two weeks, the whole bear family can leave the den but don’t venture too far.

Once the cubs are used to walking, they can begin walking to the sea ice so that sows can start hunting again because they can fast anywhere between 7 and 8 months.

What do polar bears feed on

Polar bears are hyper carnivorous, this means that 90 percent of their diet is meat. They mostly feed on ringed and bearded seals as the arctic is home to millions of them, making them readily available. They become prey when they surface to breathe or shovel out ice to rest.

Polar bears hunt primarily between ice and water; they rarely hunt seals on land or open water. That is why they live on sea ice. Ringed seals weigh about 130 pounds, making them easy for sows to prey on. On the other hand, the bearded seal can weigh the same as a polar bear averaging about 600 pounds with adult males averaging anywhere between 770 and 1100 pounds, these are often too large for sows to hunt and are potential prey for boars.

However, boars also potentially hunt prey bigger than themselves, such as walruses who weigh anywhere between 1300 and 3300 pounds more than twice the weight of the bear.

Mature bears eat the calorie-rich skin and blubber of seals as it is very digestible while cubs feast on the protein-rich red meat. They also scavenge food from other bears’ kills if food is scarce, or they haven’t caught anything.

Subadult bears may end up eating a half-eaten carcass if they cannot defend it from larger polar bears. Since most animals can outrun or outswim polar bears, their diet is supplemented by eating carcasses of dead seals, walruses, or even whales whose blubber is easier to eat when rotten. They can even swim to catch fish such as the Arctic charr or fourhorn sculpin.

Polar bears start off weighing about a pound and quickly grow to weigh over 500 pounds. With a lifespan of about 10 to 15 years, they are their heaviest once they reach sexual maturity. Despite the conditions they live in, they have grown into the largest, heaviest bears in the world.