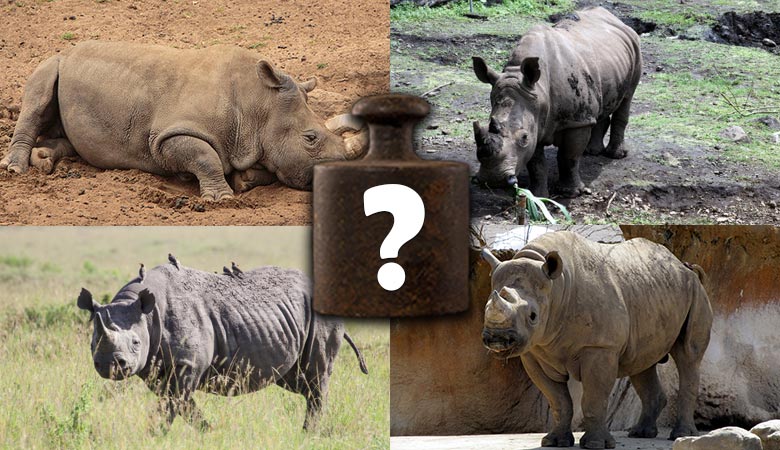 Rhinoceros is Greek, meaning nose horned. The Rhinos are among the big five endangered species, and they live for around 30 to 45 years.

Both the male and female have horns, although the female’s front horn is often longer and thinner than the males in the white and black Rhinos.

So, how much do these animals weigh?

The white rhino is Africa’s largest species, also referred to as ‘square-lipped’ rhino.

Its habitat is in grassland and savanna, with a population of about 18,067. On its snout, it has two horns with the first longer than the other. It’s horns average about 90cm and can reach 150cm in length.

The gestation period is 16 months, and its calf weighs between 40 and 65 kg. An adult white rhino weighs approximately 1800 to 2700 kg and is found in Kenya, Uganda, Zambia, Botswana, South Africa, and Namibia.

The black rhino is also known as the hooked lipped for its long upper lip, which enables it to grasp fruits, leaves, and long grasses. It displays varying shades of brown and greys as typical hide.

The black rhino has two horns, where the front one is more prominent than the one behind it.

Its size is smaller than the white rhino, and it weighs 900 to 1400 kilograms, whereas a calf weighs about 35 to 50 kilograms.

Its population globally is about 5630, and its habitat is in shrublands, deserts, and tropical grasslands. It’s mostly found in countries like Tanzania, Zimbabwe, Kenya, Namibia, and South Africa.

The Indian rhino is Asia’s largest species of rhino, found in Nepal and North-Eastern India. Its habitat is in Himalaya’s forests, savanna, and shrublands.

It has only one horn, which reaches a length of 25cm and weighs about 3.051kg. The gestation period is about 15-16 months. When a calf is born, it weighs approximately 58 kilograms.

An adult Indian rhino weighs about 1800-3600 kg. Interestingly, an Indian rhino is characterized by a plated hide, which makes it appear to wear heavy armor caused by large folds of skin where the hide is thinner and more flexible, usually between broad plates of the tougher hide.

The Sumatran rhino is the tiniest of all species and known for being the only one of its kind with body hair. Interestingly, the older the animal, the lesser the hair, which gives baby rhinos a shaggy look.

It’s the closest relative of the wooly rhinos and has fewer than 100 rhinos globally, making it the most endangered. Its habitat is in tropical and subtropical forests and distributed in Sumatra and Sabah.

After birth, the male and female calves weighed 32.9 to 34.0 kg, and an adult weighs about 550 to 1000kg. The Sumatran has two horns and a hooked lip to aid in eating fruits, leaves, and long grass.

Javan rhino is dusky grey in color and very similar in appearance to the great one-horned rhino, although it’s a bit smaller with a small head, looser, and less skin fold.

There are only 72 surviving Javan rhinos in the world found in Ujong Kulon National park, Indonesia. Their primary habitat is in tropical and subtropical forests around Sumatra and Sabah.

It can grow up to 4 meters in length and 1.7 meters in height. Generally, the Javan rhino weighs approximately 900 to 2300kg. All remaining Javan rhinos have names and can only live 30 to 45 years in the wild.

These rhinos are extinct and had two big horns on its snout and a thick fur coat. These mammals became extinct about 11,700 years ago, and only cave paintings by early humans’ show what the woolly rhinoceros looked like.

This species was common throughout Europe and northern Asia and typically measured 3 to 3.8 meters, weighing around 1800-2700kg. Its habitats were in grasslands and tundra as well as occupying cold deserts of Europe.

Generally, southern white rhinos are somewhat larger and hairier. 99 percent live in savannas of Kenya and Namibia, although the majority live in South Africa. In the wild, they have a lifespan of 35 years and 40 years in captivity.

Males defend their territory with their horns size and tend to be more solitary than females. There are about 19,600-21,000 southern white rhinos in protected areas and private game reserves, especially South Africa.

These are a Subspecies of the black rhino, and its number is low due to poaching. It is easy to distinguish eastern black rhino from the southern subspecies as it has a more extended, leaner, more curved horn and grooved skin.

It is 5ft high at the shoulder, 12ft in length, and weighs up to 300 pounds. Gestation lasts 15-16 months, and only one calf is born weighing about 75 pounds. Interestingly, they have two fibrous keratin horns used to make daggers and traditional medicine, which has led to rampant poaching.

The northern white rhino is also referred to as the square-lipped rhino. Its habitat is in grasslands and savanna woodland and was formerly found in some East and Central Africa countries, south of the Sahara.

Only two rhinos of this species exist, females, namely fatu 18 and najin 29. They live at ol pejeta conservancy in Kenya, where the male northern white rhino died on 19th March 2018.

A female rhino of these species weighs 1700 kg while a male weighs 2300kg.

That’s all you have to know about these mighty and beautiful mammals. As an endangered species, rhinos continue to be protected from poachers.