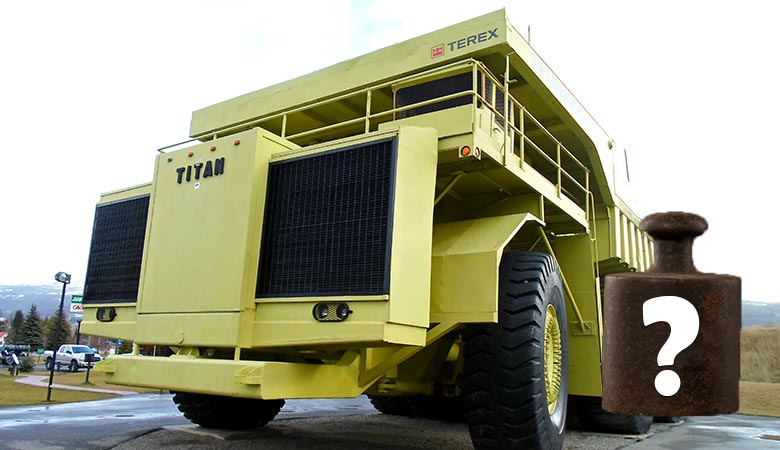 If BIG is your interest, you can’t get much bigger in the truck world than these behemoths.   When you start looking at trucks that rank as the most massive trucks in the world, you must look at the places where heavy loads are the norm.  That is a narrow field and focuses on the open cast mining done around the world.

The 10 heaviest trucks in the world are:

Trucks come in all sizes, but the following trucks are the behemoths of the world. Find out who makes these giant trucks and what they’re used for.

What Are the Heaviest Trucks in the World?

You must travel to some exotic places to find the heaviest trucks in the world.  These monsters inhabit huge open-pit mines scattered around the world.  The primary job of these massive machines it to move rock, laden with valuable ores, from the bottom of massive open cast mines to the processing plants that extract the ore.

First on our list and the heaviest of our trucks is the BelAZ 75701.  BelAZ is a Belarusian concern that manufactures earthmoving equipment.  BelAZ North America based out of Toronto, Canada.  The North American BelAZ operation handles both sales and service issues for the BelAZ products

And speaking of products, this is a whopper.  The BelAZ 75701 boasts the most massive weight and the largest payload of any truck on our list.  The statistics on this beast tell the tale.

Komatsu began operations in 1921 and opened its American operation in 1970.  The company operates in 151 countries and is the second-largest producer of construction equipment in the world.  Komatsu started as a Japanese company but has grown into multinational operations.

When it comes to large equipment, Komatsu is one of the industry leaders.  The Komatsu 980E-5 is among the most enormous of all.  It may not top the list, but this truck certainly won’t be easily missed when you see it coming down the road.

Stopping at the fuel station would put a strain on anyone’s credit card.  These monsters have 1200 gallon diesel fuel tanks.

The Caterpillar 797F is no lightweight in this list of most massive trucks.  It certainly has the highest horsepower rating of our top trucks.  Coming in third in our list, the 797F can hold its own with any equipment on the market.

You won’t be setting in speed records in the monster.  The rated top speed when loaded is 42 mph

Komatsu has some innovative technology that is included standard on these mining trucks to improve performance and increase the life expectancy of equipment that sees daily demands beyond what most equipment could ever survive.

Don’t think you can take off for a quick break and run down the coffee shop.  Every piece of Komatsu heavy equipment features the KomTrax® tracking system that reports by satellite, not just the location of the equipment, but a host of other data about the operating conditions.

Caterpillar 798 AC – When Speed is the Key to Competitiveness

You should expect the world’s leading manufacturer of mining and construction equipment to have more than one piece of equipment on this list.  Caterpillar builds different models of their giant trucks for different applications and conditions.

The 798 AC hauls more ore and at higher speeds than any other truck in its class.  The other features that make this a standout truck in the heavy haul jobs around open-pit mines are the capability to maintain speed up a grade and superior brake performance.

If you need to turn around, you better follow the old song, “Give me forty acres.”  The 798 AC required a minimum of 53 ft to get turned around.

Not many people are familiar with the name Bucyrus.   Bucyrus International was a multinational conglomerate operating in the heavy mining equipment sphere.  Caterpillar acquired Bucyrus and rebranded the entire operation under the Caterpillar name.

The MT 6300AC is manufactured in the U.S. and debuted at the MINEExpo show in 2008.  Bucyrus chose the Detroit Diesel C3 Series engine to power the MT 6300 AC coupled to an AC elective alternator that powers triple reduction electric motors to the rear axle.

Parking one of these trucks is no mean feat.  Considering that the overall length of the MT 6300 AC is a little over 51 feet and it takes a parking space almost 32 feet in width, you probably won’t be driving your work truck to the supermarket.

Liebherr got its start in 1949 in post-world war II Germany manufacturing mobile tower cranes.  Since that time, Liebherr has expanded its reach into every facet of the heavy construction equipment industry, including the rental of equipment.

The Liebherr T284 represents the pinnacle of engineering and design from the Liebherr company.  Liebherr has produced the lightest weight truck in the ultra-class that manages the highest payloads.  This combination of lightweight and load capacity makes the T284 one of the most efficient trucks operating in this class.

If you are worried about the environment and being ecologically sound, you can ease your worries.  The Liebherr T284 is Tier 2 compliant with the US EPA standards.

Don’t be mistaken when you hear that Hitachi has a monster truck on our list.  Many people equate Hitachi with small personal electronics and TVs.  What most people don’t realize is that Hitachi is a major player in the heavy mining and construction equipment business around the world.

A great example of Hitachi’s reach into the mining industry is the EH500CA-3.  The EH5000AC-3 is a genuinely enormous hauler that easily makes our list of the heaviest trucks in the world. Hitachi is known for innovation and the features of its mining trucks and other equipment.

Don’t think Hitachi skimps on the creature comforts.  The cabs of their ultra-class trucks feature specialized shock-absorbing systems, double-wall construction with soundproofing, and larger heating and cooling capacities for increased comfort of the operator.

No list of the heaviest trucks in the world would be complete without a reference to the Terex 33-19 Titan.  The Titan was a prototype machine built by the Terex Division of General Motors.  Only one of these brutes was ever built, and it held the record for the highest haul capacity of any truck for 25 years.

You can still see the Terex Titan at the tourist attraction in Sparwood, BC Canada, where it is a static, non-working display.  The Titan was aimed at the coal mining industry but when the coal market softened in the late 1970s, the market for this colossal truck failed to materialize, and the project was mothballed

When the front steering wheels turned past a set point, the eight wheels on the back would also steer moving up to 10 degrees off-center.  That would make parallel parking this beast a bit easier.

BelAZ designed the 7560 series of haul trucks to operate with slightly less capacity and increased speeds for handling looser materials loadable with smaller excavators and loaders.  Although these trucks are not lighter, they are still considered in the ultra-class of haul trucks and, by no means, should they be considered undersized.

The 75604 lists a gross vehicle weight a bit higher than others on our list, but the unladen weight is less than the other trucks in the class.  The 75604 is still a formidable truck.  Measuring 50.5 feet long, 30.9 feet in width, and 24.5 feet tall, you may have trouble finding a garage in which to park this colossus.

What many people don’t realize is that all these trucks are basically hybrids.  The diesel engines drive electric alternators that provide power to electric motors.

Big jobs call for big equipment.  If you are fascinated by things on a massive scale, these ultra-heavy class trucks should be right in your ballpark.  For size, power, capability, and sheer visual impressions, these trucks are almost overwhelming.  The great thing to contemplate is that as engineering and technology continue to innovate, we can most assuredly look forward to even bigger and more impressive mechanical marvels.