The Wild boar is a wild pig species popularly found in European forests, northwest Africa, and most parts of Asia. The wild boar population is highly distributed, with between 4 and 25 subspecies.

Naturally, these animals cannot be classified because they are easily interbred. This means that there are about four primary subspecies categorized by location.

These species are faily similar in average size and appearance. However, the biggest differentiator of these animals is their color and geographic location.

The wild boar is a very adaptable animal because it can be found in many habitats worldwide. They feed on anything, can swim well, and run fast.

Some of the common names for these animals are European Wild Pigs, Hogs, or Boars.

How Much do Wild Boars Weigh?

The environment determines the size and weight of a wild boar. Boars that inhabit arid areas with less productivity tend to be smaller than those living in areas of abundance. This is because food and water play a vital role in enhancing growth in these animals.

Such heavy adults can survive wolf attacks that prey on smaller boars. However, the overhunting of these animals has forced these animals to remain small-sized.

Wild Boar Species And Their Weight

The wild boar is known for its medium size with a large head and front end with a more petite hind body. Their body is covered with a thick double-fur and has a stiffer top layer than feels like bristles.

The undercoat beneath is softer, and the hair running the back ridge seems to be longer than the rest. Wild boars have body colors ranging from black, brown, or dark grey, determined by location.

The central European (S.s scorfa) boar is native to Europe and Eurasia and has a medium-sized body with dark/rusty brown-haired. They have long and somewhat narrow lacrimal bones.

The Carpathian boar (S.s attila) is a large-sized subspecies with extended lacrimal bones and dark fur. However, the coat is lighter than that of the Central European boar. They are native to Hungary, Romania, Ukraine, The Transcaucasia, Caucasus, Asia Minor, and northern Iran.

The Indian boar (S.s cristatus) is a boar subspecies with a long mane and brindled black coat. It is more heavily built than the S.s scorfa, and its head is bigger and pointer than its counterparts.

The Central Asian boar (S.s davidi) is somehow smaller with a long mane and light brown fur. These boars can be found in Pakistan, Southeastern Iran, and northwestern India.

The Japanese boar (S.s leucomystax) is a small, yellowish-brownish boar with no mane. It is primarily found in Japan except in Ryukyu and Hokkaido Islands.

The Anatolian Boar (S.s libycus) is a small, pale subspecies that does not grow a mane. The species are found in Turkey, Levant, Transcaucasia, and former Yugoslavia.

The Maremman boar (S.s majori) is smaller than the S.s scorfa, though with a higher and broader skull. Since they were reared on meat farms, these two boars have been interbred with the Central European boar. These boars are native to Maremma in central Italy.

The Mediterranean boar (S.s meridionalis) is primarily found in Andalusia, Sardinia and Corsica. The subspecies are much smaller than the S.s scorfa and have a dull olive-fawn fur. They have a dispersed under wool without manes. 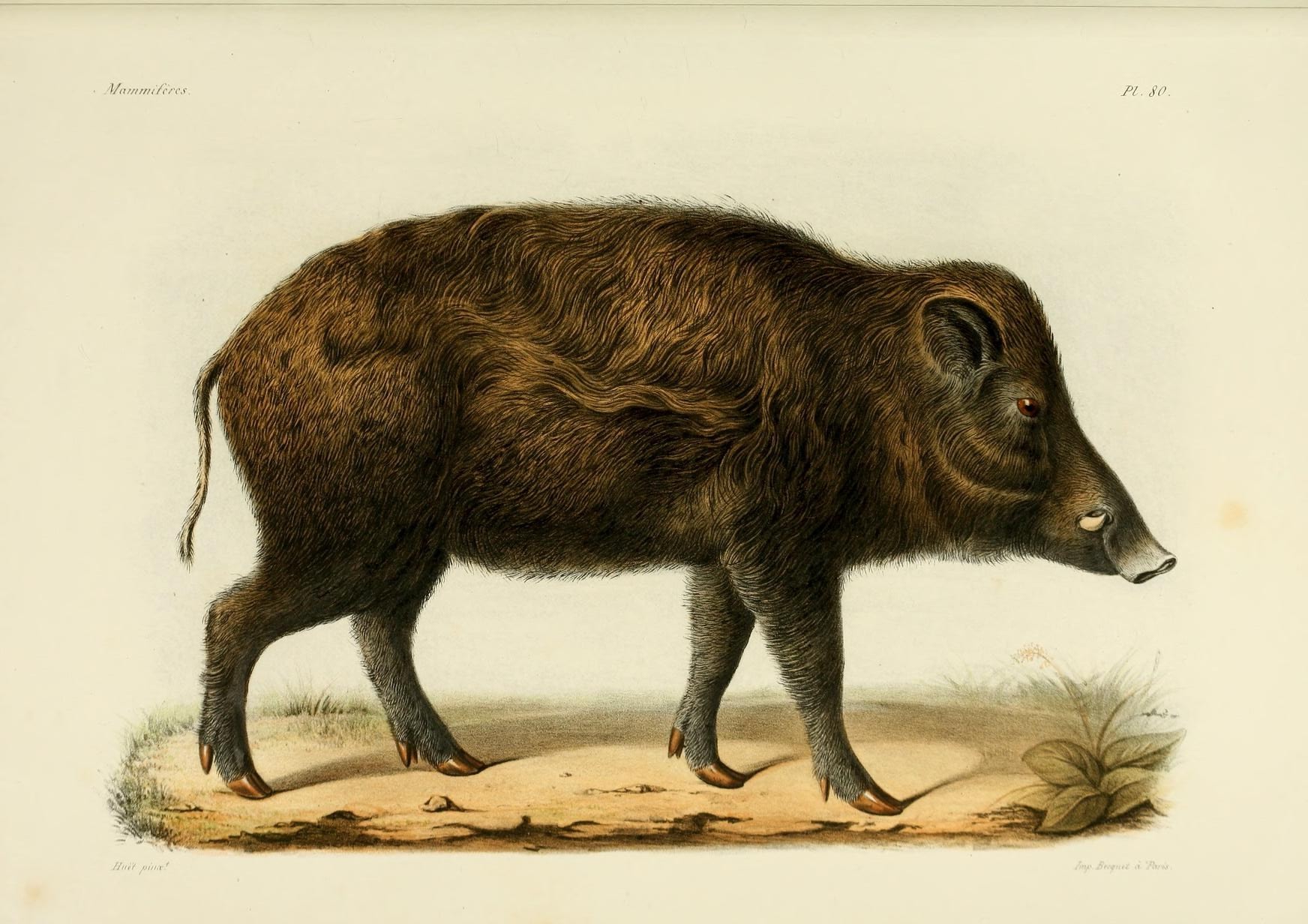 Northern Chinese boars are vastly found in Coastal China around Vietnam and on the west in Sichuan. The S.s moupinensis is a species with most variations, and there could be many other species involved. 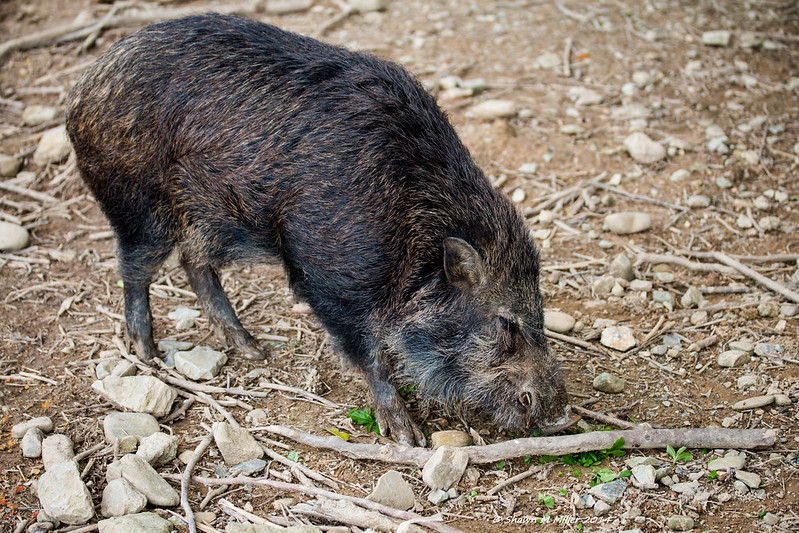 Ryukyu boar (S.s riukiuanus) is a small subspecies found in the Ryukyu Islands.

The Trans-Baikal boar (S.s sibiricus) is one of the smaller subspecies native to the Soviet Union region. This boar has dark-brown black hair and light grey patches extending from the cheeks to the ears.

The skull appears square-like and with shorter lacrimal bones. These boars can be found in Lake Baikal, northeastern Mongolia, and Transbaikalia. 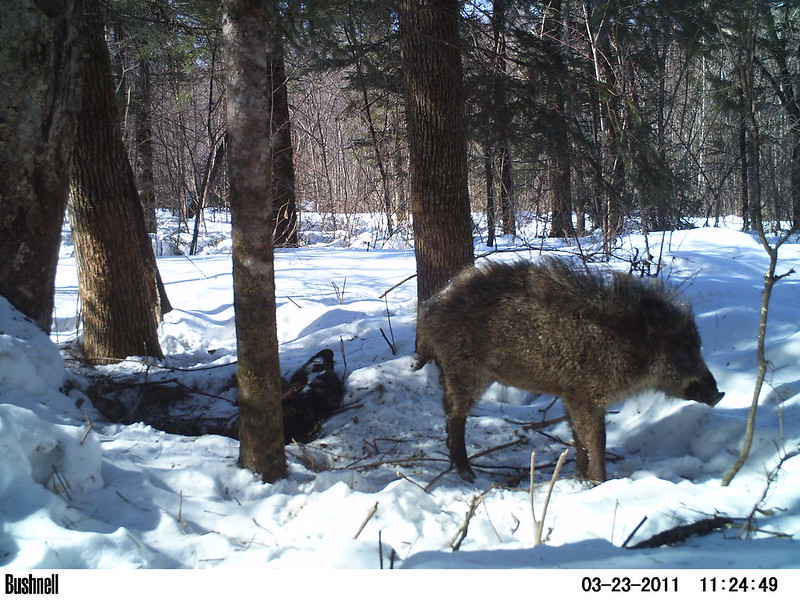 The Ussuri boar (S.s ussuricus) is one of the largest subspecies with dark hair and white bands or hair extending from the mouth corners to the ears. The lacrimal bones are shorter but more prolonged than the Trans-Baikal boar.

Wild boars reproduce throughout the year, and mating relies on the climate and food availability. Breeding may be suppressed when females do not meet their nutritional needs.

Females can reproduce when they are ten months old, while males’ sexual maturity is around seven months. The sows are polyestrous and may produce two litters every year. The estrous cycle lasts between 21 and 23 days and the gestation period lasts between 108 to 120 days.

The sow may give birth to 5 or 6 piglets on average, and the newborns’ weight is between 0.4 to 0.8 kg. These piglets will be weaned once they are 8-12 weeks old.

This is because males tend to have higher testosterone levels in winter, and shorter days mean the sex hormones are highly concentrated in the boar’s semen plasma.

Wild boars live in sounders (groups of wild boars) with 6-20 closely-related females. These groups may contain over 100 animals in specific habitats.

When the sows are getting ready to give birth, they leave the sounder and come back with the young ones when farrowing. Even after maturing, the piglets may still stay in the groups with their mothers. When these herds overlap, they may split into subpopulations.

Estrous females attract polygynous males who compete for a chance to breed. Successful males find the females in estrous to get them interested. If a female is interested in a male, they will urinate to show a response. When a female does not urinate, the male gives up.

The most significant physical difference between male and female wild boars is their body size. Male wild boars are huge-bodied and taller.

On the other hand, female boars are somehow smaller and shorter. Males also tend to have more fur with a single color on their bodies. In addition, females sometimes have unique body patterns which may differentiate them from males.

Wild boars live in a sounder of more than 20 species. The competition for mates in these sounders is high, meaning most males have to break away after a while. Scientists understand this concept and can identify a male wild boar when they see it walking alone.

During reproduction, estrous females are always followed by the males in sounders trying to lure them into mating. Animal behaviorists can identify male and female wild boars by how they behave.

For example, male wild boars can be identified when they mount on females during mating. At the same time, estrous sows will urinate when they are ready to mate. This is enough identification of the animal’s gender.

Males are polygynous and mostly travel alone, meaning they cannot care for the piglets. Once the mating season is over, the males will move to other sounders to expand their empires. Sows will stay behind to care for the young ones until they are older.

Even though parental care in sows is lower than in cattle, sheep, and goats, these animals can only handle small litter sizes. Females can be identified when piglets are around them, and they also feed in groups. They tend to be overprotective and keep their young ones within their reach.