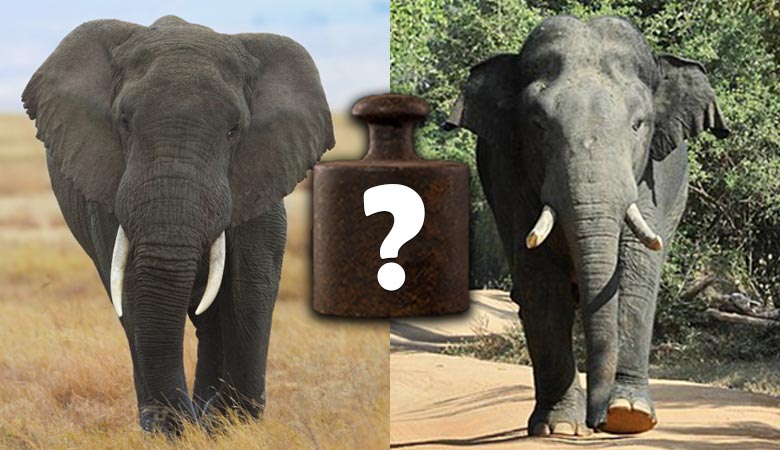 Known as the world’s largest and heaviest land mammal, elephants can live for up to 60 to 70 years. The easiest way to tell species apart is by looking at their ears, but you may not be able to tell the male from the female since their genitals are hidden between their legs.

Their trunk has more than 150,000 muscles and is the most sensitive organ, often used to suck up water to drink. It holds around 8 liters! But, the question on everyone’s mind is, how much do these huge mammals weigh?

In the table above I’ve listed the average adult and birth weight of the 10 known elephant species. Read on to learn more about the weight of these magnificent animals.

When calves are born, they weigh approximately 92kg (205 pounds). The African Elephants are herbivores and feed on grasses, creepers, and herbs.

The Asian elephant is the second biggest elephant species. As the name suggests, this species lives in Asia and is commonly found in the south and southeast parts of the continent. They can grow to 18-21ft in length and stand tall at 8-10ft. That’s between 5.5 meters to 6.4 meters in length and between 2 to 3 meters in height.

They weigh approximately 4000-10000lbs (2-5tons). Asian females lack tusks and are referred to as ‘tushes’ when they have them. The tasks are only visible when the elephant opens its mouth.

Asian elephants became famous when Sr Victor Brooks killed a mammal weight 907 pounds, 8 feet in length, and around 17 inches in circumference. Asian elephants have a twin-domed head that bears indentation in the middle.

These species are extinct and had a long pair of twisted tusks and a bulging head. The tusks were, on average, 2.4m and 20cm in circumference.

Compared to the Asian elephants, the Palaeoloxodon naumanni was a bit smaller, averaging about 2.5 meters. It lived in forests because of the cool temperate deciduous trees.

An adult Palaeoloxodon weighed around 10 tons, which is equal to 9,071 kilograms. They named the species after Heinrich Edmund Naumann, who discovered the fossil at Yokosuka, Kanagawa, Japan, about 43000 -24000 years ago.

It’s a subspecies of the Asian elephants that live in northeastern Borneo in Malaysia and Indonesia.

Also, they are passive and tame, which makes scientists think that their descendants were domestic.

The forest elephant is the smallest of the living three species. It’s smaller than the African bush and weighs around 5950 or 2.7 tons and stands up to 2.5meters at the shoulder.

Both sexes have straight, down-pointing tusks that erupt when they are 1-3 years. They can grow to about 1.5m long and be as heavy as 50 to 100 lb when born.

Its diet consists of leaves, seeds, fruits, and tree bark. It also has a concave back and large ears that help in communication and regulating body temperature.

Point to note, the forest elephant’s forefoot has five toenails while the hindfoot has four.

It’s the darkest and largest Asian elephant and has patches of depigmentation. Its ears, face, belly, and trunk are the most affected, but the elephant stands tall and beautiful non the less.

They live in zones in the east, north, and southeast. These elephants are hard workers, often doubling up to transport passengers, carry timber, and participate in public events like Buddha’s Tooth procession.

It’s an extinct species that lived and inhabited Cyprus and some other Mediterranean islands around 13000-11000 years BC. An adult weighed not more than 200 kg (440 lb.) and had a maximum height of around 1.4m.

Scientists are still debating if its extinction came because of the arrival of humans to that island. The remains of this species comprise 44 molars, a single femur and tusk, and very sparse bone fragments.

It’s mainly found on Sumatra Island, but it’s the largest mammal on the island and a subspecies of the famous Asian elephant.

The Sumatran elephant is almost bald with small rounded ears, and females rarely have tasks.

Its females are smaller and have short tusks or luck tasks altogether. It has 19 pairs of ribs, and the biggest elephant is said to have been 3.43m or 11.3ft high at the shoulders. This species is endangered due to poaching, deforestation, persecution by human and habitat loss.

There you have it. That’s how much these majestic beasts weight. Next time you visit Asia or Africa, be sure to spot one of these elephants.