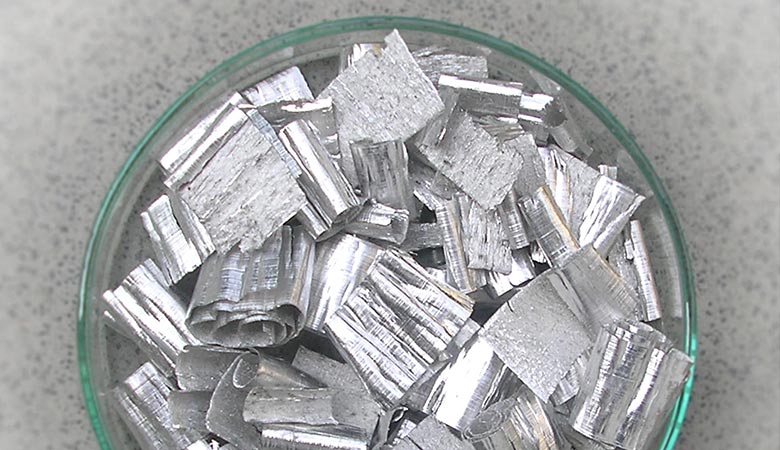 When people think of metal, they often think of heavy metals, not light metals, because that’s the kind of metal most people think they’re interacting with the most in day to day life. But the truth is that the lightest metals on earth are often hidden right under our noses.

While these light elements are all classified as metals, they vary wildly in their properties and applied uses in human chemistry and technology. Read on to find out more about these fascinating metals.

Lithium is a type of metal that is used often to construct lithium ion and their more long-lived cousin, the lithium-sulphur battery. These batteries are popular in lightweight applications such as cellphones. When lithium ore burns, it gives off a vivid crimson light.

Another technical application of lithium is that when it is added to molten glass in the form of lithium carbonate, it serves to make the tempered glass stronger and lighter once cooled as well as reducing the energy necessary to melt it.

Lithium is also a popular form of medication for some psychiatric illnesses such as bipolar personality disorder. According to WebMD, when medicated with lithium, bipolar patients had reduced instances of bipolar depression. Lithium has even been shown to prevent incidences of suicidal depression in bipolar individuals. The fact that lithium is so light is the only reason it can be used in the human body.

Back in the day, people were processing potassium in their own homes without even knowing that it was even a metal because it formed a super lightweight salt compound.

The process of forming this compound was called potash and involved leaching plant ashes in large iron pots in order to distill potassium salts from them. This potash was a valuable resource for crafts such as creating fertilizer, manufacturing dyes, and gunpowder and dyeing different types of fabric.

Potassium is a vital nutrient in the human body, most importantly, due to its ability to conduct electricity. This makes it an essential part of biological processes such as the electrical impulses involved in nerve endings, allowing the body to both send neurological signals as well as contract muscular tissues.

In chemistry labs, potassium is best known for having a volatile reaction when it comes into contact with water, and adding potassium to water can result in a violent explosion.

This biological function is not limited to humans either. Herbivorous wildlife such as deer will seek out “salt licks,” or rocks with veins of salt that they will lick to increase their intake of vital sodium.

In everyday life, most people are familiar with sodium in its most common compound, sodium chloride, otherwise known as common table salt. While it is common enough today, in ancient times, salt was a prized trading commodity.

Out of all the lightweight metals on this list, rubidium is probably the one that people are least likely to be familiar with outside of a science lab. Its most common application is to create red and purple fireworks since when it burns, it burns with a reddish-purple color.

Rubidium is usually created as the by-product of creating lithium, but that doesn’t mean that it’s useless. Rather rubidium can be used for several technical applications due to its light weight, including working to remove trace gases in appliance components such as vacuum tubes. Because it is easily ionized, rubidium is also used in ionic propulsion systems in astronautical engineering, according to NASA.

Another light metal found in the human body, calcium is what the body uses to form harder biological compounds such as bone and tooth enamel. When humans are deprived of calcium, their bones become porous and brittle in a process known as osteoporosis.

Because it’s a metal, you would think that calcium would make bones too heavy to be function, but you’d be wrong. That’s because calcium is so light compared to other kinds of metals.

Using calcium in its carbonate form as limestone was what allowed the Romans to invent concrete, making it one of the most instrumental metals in the construction of the civilized world. Calcium carbonate is also the material used to form the Egyptian pyramids.

More significant to the biological processes of plants than animals (but essential for both), magnesium is a light metal that allows for photosynthesis. Without it, plants would not be able to produce their own food and would not survive.

In technical applications, magnesium is most often used as an additive in metal alloys. Because it is so lightweight, it is an ideal material for the manufacture of small electronics such as cameras, laptops, smartphones, and other handheld gadgets.

While this light metal is present in over 100 other types of minerals, the difficulty presented by extracting it makes it a rare element. In fact, there are only three countries—China, Kazakhstan, and the United States—that produce beryllium at the industrial level.

A special property of beryllium is that it is not magnetic, which makes it a good metal for constructing tools designed to be used on equipment that is sensitive to magnetic fields, such as tank guidance systems and surveillance satellites. Because the primary use for beryllium is military in nature, not much is known about how it is used in government applications.

Cesium is a lightweight metal that is used in atomic clocks similar to the same way that rubidium is used, except that cesium results in a more accurate time. In its metallic form, cesium is generally considered too volatile and dangerous to handle, so it is usually sold as the compound cesium azide. This compound can then be heated to remove the cesium again for applied use.

Another quality that cesium shares with rubidium is its potential as a fuel for ion propulsion systems in rockets and spacecraft.

However, the reactivity of cesium makes it a dangerous chemical to work with, especially around water, where it forms a strong base called cesium hydroxide that is so caustic it can eat through glass.

Strontium is most often sourced from the silvery-blue crystal known as celestite, and due to its light density and special properties, it has many functions in applied science and technology. It’s used in everything from coloring fireworks red to making glow in the dark paints.

As one of the alkali metal family, strontium is highly volatile when it comes into contact with both water and air. Strontium will combust when exposed with air and transforms into noxious strontium hydroxide when exposed to water.

Along with sodium, aluminum is another lightweight metal that can be easily found in most domestic households due to its many household uses. When used as thin metallic sheets, aluminum has a variety of household functions such as tenting foods in the oven or covering foods to preserve them.

Outside of the home, this silver-white metal is used for many other functions that take advantage of its light weight and resistance to corrosion, including its use in airplane components and tools. Because it can be completely reused without any of its chemical properties being altered or reduced, it is a popular material for recycling programs.