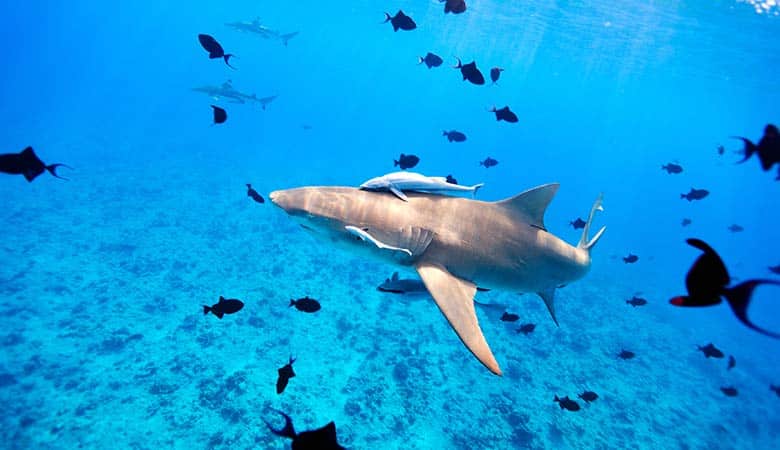 Animals of all different sizes stalk through the jungle. Sometimes, though, you might want to know about what they weigh. That could be because you’re stuck in the wild and want to know how much an animal weighs in case you need to fight it. Or maybe you’re just falling down a rabbit hole of fascination with animal sizes.

Since the weight of an animal is based on factors such as gender and age, our range was about 50 pounds under or over the 200-pound limit.

Something to note is that the weight of different animals in different places can sometimes correspond to their environments. For the most part, animals in colder climates will be chunkier as that is what helps them stay warm. Animals in warmer areas will usually have a slender build to be able to keep themselves cooler.

Sea Animals That Weigh Around 200 Pounds

There are more animals under the sea that weigh 200 pounds than you might think. To be able to defend themselves in the wild, animals typically either need to be big and sturdy or small and fast. We’ve found the big and sturdy animals.

The lemon shark weighs about 220 pounds as a full-grown adult. As the name suggests, the lemon shark does have some yellow splotches on its body, which make it easy to identify. The lemon shark typically measures from about 8 feet to 10 feet in length. Is it the largest shark ever? Not by any means; the great white has it beat by a mile.

Lemon sharks are not on the endangered species list yet, but their species is classified as “near threatened.” Lemon sharks are particularly enticing for humans: that yellow skin is often used to make leather. They’re very pretty and relatively compact sharks, which does make them popular at aquariums. They’re also used as a food source in some places.

Loggerhead sea turtles range from about 175 to around 350 pounds on the larger end. The average adult male loggerhead turtle weighs 250 pounds. They’re about 3 feet long and carnivorous. If you get caught in the ocean with one of these, don’t expect it to go down without a fight.

The IUCN Red List classifies loggerhead turtles as vulnerable, which is just one step below endangered. The most significant factor in the species’ population decline is ocean pollution, followed by poaching. The animal is used mainly for food in fish markets, and their fins and shells are often sold for decoration. The eggs these turtles lay in the sand on beaches are considered a delicacy for birds, and some uneducated tourists actually take them as souvenirs when they find them.

Sea sponges typically weigh up to twenty pounds per sponge. That being said, it would take ten of them to reach 200 pounds. The sea sponge can live up to 2,300 years. The IUCN Red List has either not evaluated most sea sponge species or assessed them to be of least concern.

Sea sponges don’t get used a lot above the water for much at all. They are sold as souvenirs sometimes, but to find an authentic sea sponge in a gift shop is not as easy as you’d think. Due to their obviously spongey texture, they are not considered a prime food source for any animals at all.

The Japanese sturgeon has an average weight of about 230 pounds. They’re pretty massive fish, coming in at around ten feet in length when they’re fully grown. There are 27 other species of sturgeon, ranging from 80 pounds to 490 pounds, depending on the species.

Forest Animals That Weigh Around 200 Pounds

These are the animals you’ll find in the woods outside your home or when you’re camping in the wilderness. These are arguably the most important animals when it comes to knowing their weights; if you have to fight for your life or something, you can at least go into it knowing whether or not you have a chance.

The average adult male black bear weighs about 250 pounds and stands at 5 feet and 6 inches tall. For reference, the average American man stands at 5 feet and 10 inches with a weight of just under 200 pounds. If you find yourself needing to fight the bear, that average Joe you have with you stands a good chance.

Black bears are pretty common to find anywhere along the east and west coasts, as well as in the Rocky Mountains. They are hunted for their skin, meat, and paws, but their population is not threatened according to the IUCN Red List.

The white-tailed deer can reach up to 300 pounds when it’s fully grown. They’re about 6 feet when they reach adulthood, and they can live up to 14 years. Despite being hunted pretty heavily, the deer population is stable and classified as “least concern” on the IUCN Red List.

If you go hunting for deer, then you probably know that there are weight limits for the deer that you’re allowed to hunt. They usually must be a specific size before you can hunt them, and some states actually put weight caps on different species of deer. Breaking these laws and weight limits might result in the loss of your permit and a hefty fine.

An adult male wolf reaches about 180 pounds and about 6 feet in height.  That means that, if they stood on their back legs, they would nearly mirror the stature of an American male. For reference, that’s about the size of Bernie Sanders and Leonardo DiCaprio.

Wolves can be found all over the United States. Despite the fact that they do get poached by trophy hunters, the IUCN does not see a concern for their population, and their numbers are steady.

Warthog weights vary by species; common warthogs are known to be slightly bigger than desert warthogs. However, an adult female warthog weighs anywhere from 150-250 pounds. While you probably won’t find a warthog bumming around in the woods near your house in America, there is no telling when you might come across one unexpectedly if you decide to take a trip across the Savannah.

Warthogs are considered to be of least concern on the IUCN’s Red List. They have pretty huge tusks and some sharp teeth. That, coupled with their tough and leathery exterior, makes sure that warthogs don’t fall prey to too many animals. They’re also really fast reproducers, so their numbers quickly replenish in the event that they fall for whatever reason.

Why is Any of This Important?

Do you need to know how much a warthog weighs to get by in life? Absolutely not. However, it is definitely something you can use more often than you think. As our world changes, the state of our animals often changes with it. Being able to follow their weight trends over time is imperative to understanding the animals and knowing when they may be struggling. The IUCN Red List of threatened species is a great way to see what animals need help now and which ones can wait.