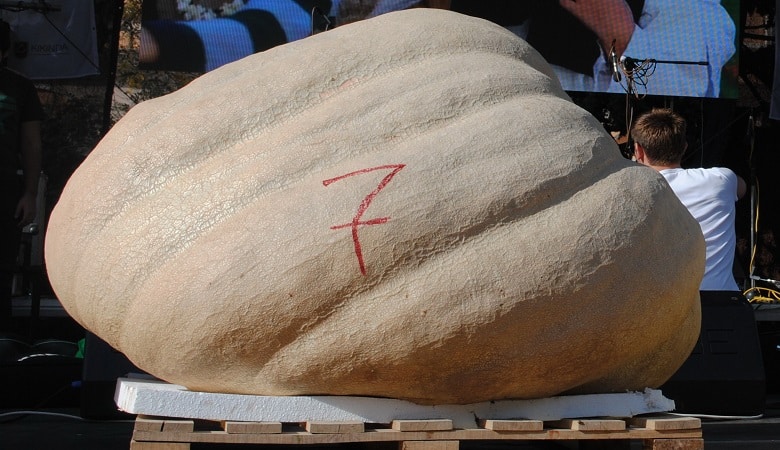 Maybe you enjoy biting into a crisp apple. How’s a bowl of freshly picked strawberries sound to you? And in the summer, what’s more refreshing than a cold melon, be it cantaloupe or watermelon?

We could argue about which fruit tastes the best or is the healthiest. But the heaviest—there shouldn’t be any argument there, right? If it were only that easy.

What are the heaviest fruits in the world? If you were only to count the top seven fruit, they would all be pumpkins. Instead, we have picked seven different fruit and are going to tell you about the heaviest of each of these:

Here is the round-up of the heaviest fruits in the world.

It should come as no surprise that the pumpkin is one of the heaviest fruits in the world. After all, many people make annual trips to the pumpkin patch to pick one out for carving around Halloween. However, it can be shocking to hear just how large some pumpkins can get.

In addition to this, it also holds the record for the biggest fruit in Belgium.

Gigantic pumpkins are over 90% water and have little natural sugar. In other words, they don’t taste like much of anything. That’s why most people use these heavyweights for things like boats. Check out this video to see a man paddling his “boat.”

Along with pumpkins, watermelons tend to be large when compared to other fruits. You may see full watermelon on display at your local grocery store, but they still are sizable enough that you can put one in your cart and carry it home. Overall though, your grocery store selection doesn’t have anything on the largest watermelon.

In 2013, Chris Kent (USA) grew the heaviest watermelon that weighed 350.5 pounds. He received his award at Ohio’s Operation Pumpkin festival that happened between October 3 and October 5 in the same year. Chris uses seeds from the Carolina Cross variety of watermelon to grow the biggest watermelons.

The growers soak the seeds in water for 60 minutes and then plant them in potting mix. For the first few days, seeds are kept indoors in a warm environment, and they will take about three to four days to sprout. The seeds are kept outdoors once they have sprouted.

The heaviest jackfruit in the world was grown in India. It weighed 94.18 pounds and had a circumference of 52 inches (132.08 centimeters). Plus, it was 22.5 inches (57.15 centimeters) long. Amazingly, the family of the fig tree and the jackfruit tree is the same.

A common fruit in the Philippines, Southeast Asia, and India, jackfruit is also grown in eastern and central Africa. In addition to this, it is very famous in Brazil and Suriname. As the fruit ripens, it changes from light green to yellow. The fruit is loaded with iron, calcium, and potassium and is robust against drought, disease, and pests.

Bananas are not tiny, but you probably wouldn’t consider them large, either. However, like other fruits, they can grow to a wide variety of sizes.

Back in 2001, Tecorone SL and Kabana SA of Spain grew the biggest bunch of bananas. The bunch consists of about 473 bananas and weighed 287 pounds. Many farmers harvested the fruit with the goal of transforming a desert area into a tropical fruit farm.

Bananas are a good source of magnesium, potassium, vitamin C, vitamin B6, fiber, and manganese. In several nations, banana leaves are used to wrap around tamales in Mexico and sticky rice in some parts of Asia. In addition, banana peels have been used as an anti-inflammatory and antiseptic to encourage the healing of wounds.

Similar to bananas, lemons are relatively small and easy to handle. So it was surprising to find out that the record for the largest lemon is pretty big.

In 2003, Aharon Shemoel (Israel) grew the heaviest lemon in the world on his farm. The circumference of the lemon was 29 inches, and it was 13.7 inches high. This lemon weighed about 11.6 pounds, and it grew as part of a pair with another big lemon. Apart from this, José Antonio Molina of Spain discovered a lemon in 2012 that weighed 4.4 pounds (two kilos).

Several desserts and pastries contain lemon juice as an ingredient. Moreover, the unique flavor of the lemon is used to enhance several vegetables, fish, and poultry dishes throughout the world.

The largest apple in the world was grown in Japan in 2005. Chisato Iwasaki discovered the apple, and it weighed 4 pounds and 1 ounce. The Hokuto apple is a round yellow fruit with pink striping. It is a hybrid of the Mutsu and Fuji varieties, and farmers harvest this fruit in mid-season.

There is a larger apple, but it is not edible. You can find it in Winchester, Virginia. The apple, which is red and huge, sits outside an antebellum mansion. Phil Sheridan, a Civil War General, used this mansion as his headquarters. At present, the headquarter is a gift shop. Check it out here if you want to visit or just interested.

While it’s unclear how big this apple is, it’s massive and worth a visit if you find yourself in or near Winchester.

Odds are, you probably don’t think of a strawberry when you think of heavy fruit. Like other berries, the strawberry is small enough that you can fit a few in your hand at once. However, some strawberries are much bigger than average.

Mr. Koji Nakao, a Japanese farmer, contacted Guinness World Records when he discovered an unusually huge strawberry during harvest. The fruit weighed 250 g, or just over half of a pound, with a circumference of 9.84 inches, length of 4.72 inches to 11.81 inches, and a height of 3.15 inches.

And surprisingly, the giant strawberry was a mutation, and mutations can happen for several reasons. Multiple berries have combined to form one big strawberry in this case.
Final Thoughts

As you can see, the heaviest fruit in the world is the pumpkin. Unless you have a fruit larger than those, we recommend that you do what fruit are for to be eaten and enjoyed. Happy munching.