Amphibians, in general, are cold-blooded organisms that can live both in and out of water. Frogs and toads are the first creatures that spring to mind when we think about amphibians.

Normally, we think of frogs as being little (especially young frogs!) – we wouldn’t expect to see a frog bigger than a domestic cat, or one with a mouth huge enough to swallow other frogs whole.

The frog is 32cm (12.6 inches) long and 3.3kg in weight (7.3 pounds). No other frog weighs as much as this one. It is found in streams and forests in Cameroon and Equatorial Guinea.

Men can move boulders up to three feet broad to create large nests for females. They consume fish, snakes, birds, mammals, and amphibians like newts and salamanders.

Their hue ranges from yellow-green to yellow-orange to brown and black. But the tadpoles only consume one plant. These massive creatures have long been sought for food and in the pet trade.

Their habitat is being destroyed, making them an endangered species.

The Chilean gigantic frog, sometimes known as the helmeted water toad, is a member of the Calyptocephalella family.

They live in deep ponds in the Chilean plains. Yellow, green, or brown, with a big spherical head. Their populations have dwindled to the extent that they are now designated as Vulnerable.

As the name implies, these frogs may grow up to 30 centimeters (11.8 inches) long and are found in Lake Junin and other nearby lakes as well as the Mantaro River. Lake Junin frogs are 2kg (4.4 lbs) in weight and like to live, feed, and reproduce in water.

They are dark brown and have smooth skin, earning them the name Andes smooth frog. Unfortunately, poaching and lake pollution have put these aquatic frogs on the endangered list.

A giant Asian river frog known as the Blyth’s river frog may grow up to 26cm (10.2 inches) in length and weigh up to 1kg (2.2 lbs) in weight, making it the heaviest frog in Asia.

They are Large brown, yellow, or gray frogs often found along rocky streams in Indonesian, Malaysian, Thai, and Singaporean forests.

Endangered status has been given to the Blyth’s river frog due to poaching and the destruction of their habitat caused by logging and deforestation.

The African bullfrog, commonly known as the pixie frog, may reach 25cm in length (9.8 inches). They are olive green with a yellow or orange throat and are found in Africa’s deserts or floodplains.

Despite preferring to dwell near water, African bullfrogs can readily survive in entirely dry areas by digging a hole in the ground when the surface gets too hot and dry.

They are skilled predators, waiting for their victims to attack before consuming them whole. The Bullfrog is one of the world’s biggest at 2kg (4.4 lbs).

Their yellow bellies and brown bodies with spots or stripes help them blend in on the banks of streams where they are typically seen.

The mountain chicken frog has been poached for food, and a fungal illness has decimated the population, making it extremely endangered. 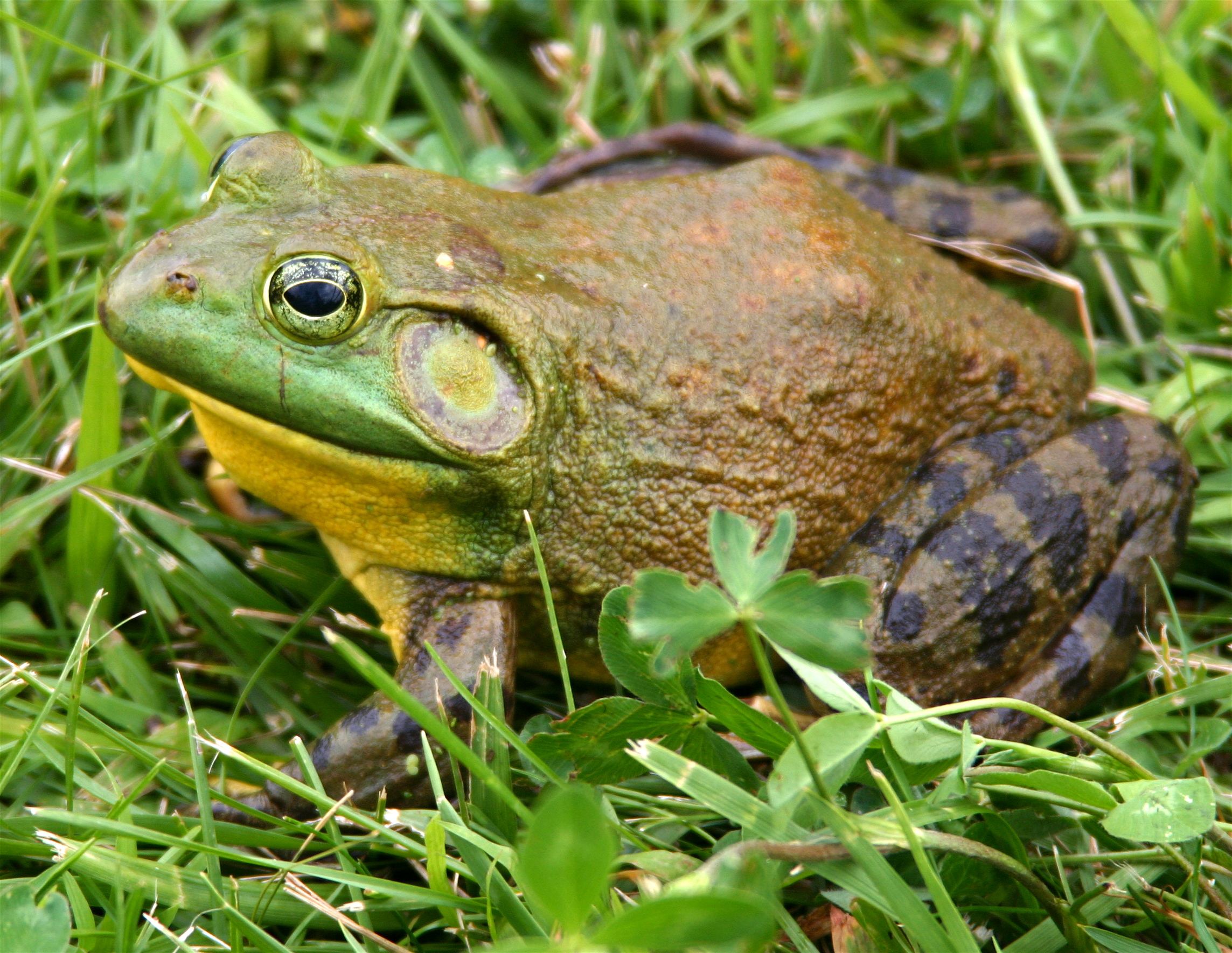 In addition to the US, they have been brought to numerous nations in Europe and Asia. Females are somewhat larger than males, reaching 20cm (7.9 inches) and 0.5kg (1.1 lbs).

Some of the species that it consumes are regarded to be endangered. It is classified as an invasive species in numerous nations. They are dark or olive green in color and are like marshes, ponds, and lakes.

The Surinam horned frog is green and brown to blend in. It often waits for hours waiting to attack its prey.

Given their enormous jaws, they often eat lizards, birds, small animals, and other frogs whole. 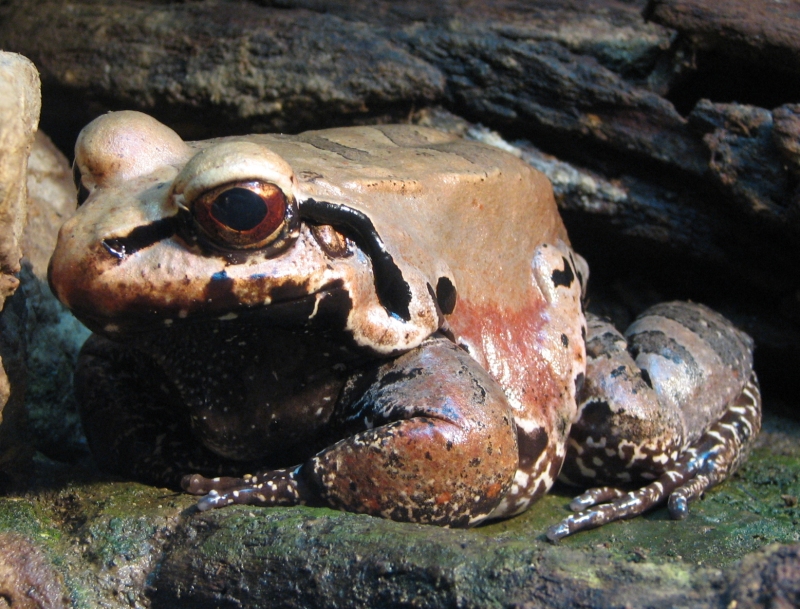 Smoky jungle frogs have a huge head with a rounded nose, a tan body with red-brown patterns, and a large rounded snout.

These frogs are found in tropical and subtropical woods and marshes in Bolivia, Brazil, Ecuador, Colombia, and Peru.

They devour spiders, lizards, snakes, bats, birds, and even other frogs. The smokey jungle frog’s ability to elude capture and its defense system is fascinating. The Smoky Jungle Frog weighs 0.75 lbs.

Borneo, Indonesia, and Malaysia are home to the 17cm giant river frog. They are usually light brown and may be found along stream banks in rainforests, where they mix in nicely.

Despite local food hunting and habitat decline, the IUCN classifies enormous river frogs as Least Concern. The 1kg Giant River frog is one of the heaviest frogs on the planet (2.2 lbs). 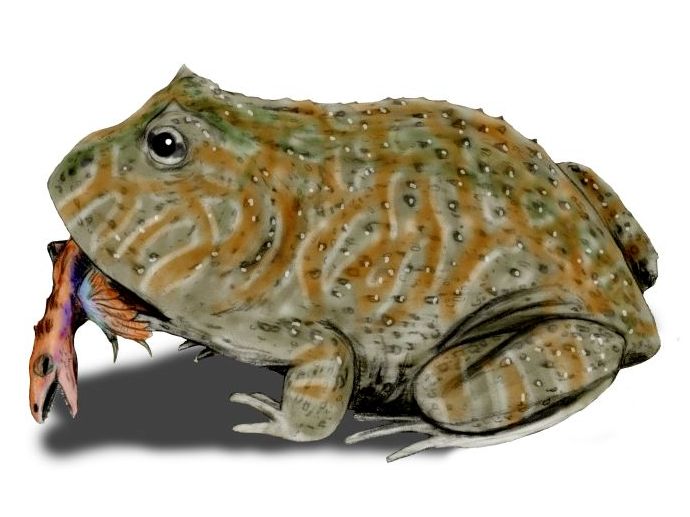 The “devil frog,” Beelzebufo ampinga, may be the world’s largest frog. These beach-ball-sized frogs, which are now extinct, grew to a length of 41 centimeters (16 inches) and a weight of roughly 10 kg (4.5 kilograms).

They existed between 65 and 70 million years ago in Madagascar during the Late Cretaceous epoch.