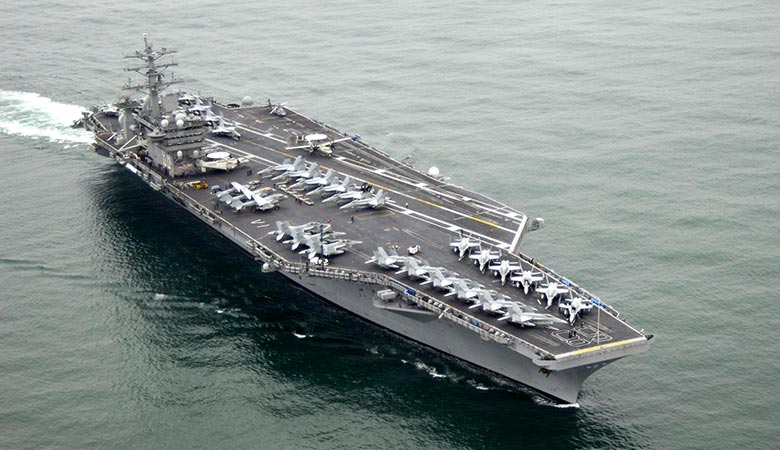 Warships are one of the most magnificent battle crafts ever made. Intended to break through the vast waters in the great continental chasms, these giant vessels carry some of the heaviest weights on the planet.

The following is a list of the ten heaviest warships in the world, both active and not:

These mammoth beauties are the prestige of their creators. They were made to conquer – to unravel interesting tales of war. Read on to find out more about the ten most massive warships ever to sail the world’s water.

The USS Nimitz is the lead of the great Nimitz Class made of ten nuclear-powered aircraft carriers. The ship was named after Chester Nimitz, a fleet admiral who was one of the major players in the naval history of World War II, acting as commander in chief.

The USS Nimitz was created and commissioned as CVN-68 in 1968, displacing 104,000 tonnes. The CVA means it was an attack aircraft carrier while the N stands for nuclear propulsion. The nuclear reactors for this ship can provide power to her for two decades before needing to refuel.

However, she was later redesigned and commissioned as CVN-68, becoming a nuclear-powered aircraft carrier for multiple missions. She’s still operating in the Pacific waters, continuing to move the needle of naval history.

The USS Gerald R. Ford of the Ford Class was built to replace the Nimitz class. She weighs around 100,000 tonnes and features advanced technology like the Electromagnetic Aircraft Launch System (EMALS), which shoots aircraft off the deck in a seamless manner.

Her Advanced Arresting Gear (AAG) is also another awe-inspiring function that helps aircrafts land more efficiently. EMALS and AAG are some of the main developments meant to improve overall working efficiency and lessen operating costs.

This is the first naval ship to be entirely created using a three-dimensional model. She is a prestigious piece with improvements in space and workspaces to influence the universal quality of life for crew members.

Check her out as she breaks the waters in angles:

The USS Enterprise CVN-65, like the Nimitz CVN-68, was redesigned from CVN-65. She is the first aircraft carrier to be nuclear powered and, at one point, the largest active warship in the whole world, weighing almost 93,300 tonnes.

The USS Enterprise is the eighth of the US naval vessels in the Enterprise-class, which serviced the colonial forces in the Revolutionary war.  She was nicknamed “Big E” since memories were kept in her from her predecessor.

However, Gerald R. Ford now adopts her name.  Also, after the ships in the Ford and Nimitz classes, the CVN-65 is ranked the 12th heaviest ship in the world by displacement.

The Kitty Hawk CV-63 was nicknamed Battle Cat and weighed around 80,000 tonnes. She also holds the third-longest active status. She served in the Atlantic waters and was then deployed to Japan for ten years, after which she was replaced by the USS George Washington. She then returned home to be decommissioned after many years of service.

After the decommissioning of Kitty Hawk in 2009, she was one of the two most suitable conventional warships chosen to be turned into museum ships. The USS Kitty Hawk Veterans Association raised $5 million as a pledge to preserve the Battle Cat as a museum. The Veterans Association also donated $15,000 of memorabilia in case the museum idea ever happens.

Musashi was in the Yamato Class with her sister Yamato. She was the largest battleship ever made at the time she was built in 1940, weighing more than 71,000 tonnes. Musashi mainly dealt with American troops on Japanese territory in World War II.

The Musashi battleship, along with Yamato, was built with immense secrecy to prevent the American government from knowing the specifications, let alone the name of the ship. They ended up underestimating most of the ship’s specifications, and even after being sunk by a US carrier-based aircraft, Musashi’s specs became known to the world 70 years later when it was found.

Still today, many people claim that Musashi and Yamato are the most iconic warships of all time.

The HMS Queen Elizabeth (R08) is the lead ship of Queen Elizabeth Class of two, sister of the HMS Prince of Wales. She weighs 65,000 tonnes and is expected to keep a conspicuous presence on the global stage for the prestige and defense of the royal navy.

This warship was named by Queen Elizabeth II, who said that the warship marked the start of a new naval history in the royal navy. Commissioned in 2017, HMS Queen Elizabeth starts her service in 2020.

Shandong is the second aircraft carrier and the largest warship wholly built in China. She weighs 55,000 tonnes and was commissioned in 2019, now awaiting her deployment.

Shandong carries similar but improved specifications to the first Chinese carrier, Liaoning. She has increased the space and added a bridge to improve efficiency. She also incorporates an active electronically scanned array radar system.

However, like Liaoning, Shandong uses Short Take-off But Arrested Recovery (STOBAR). This is something that will change since the third carrier will use the new EMALS model that’s capable of launching heavier and more advanced aircraft.

The USS Iowa (BB-61) is the Iowa class’s lead ship. She’s the only ship in the Iowa class to have served in the Atlantic Ocean during the second world war. Weighing 45,000 tonnes, she was still fast since her class was built to move quicker than previous battleships.

The Iowa battleship was also ideal for modernization, which kept her up to date with new military inventions. A bathtub was even installed to give comfort for President Franklin D. Roosevelt when he’d cruise to meet Winston Churchill, the British prime minister.

This warship was decommissioned twice since she was initially commissioned in 1943. After decades of service, the Iowa class was considered too costly to maintain. However, she was maintained and later opened to the public as a museum in 2012.

Tirpitz was the second warship in her Bismarck class. She was modified and became more massive than Bismarck, the first of her class. She weighed 42,900 tonnes and was the largest battleship in Europe at the time.

Tirpitz played a significant role in preventing attacks by the Soviet Baltic fleet. She continued serving even after her sister Bismarck got lost early in the war. However, she was sunk by the Royal Air Force members in 1944.

The USS Zumwalt (DDG 1000) is one of the most technologically advanced warships in the world. She’s the lead ship in the Zumwalt class – a guided-missile destroyer displacing 15,656 tonnes.

Named after Admiral Elmo Zumwalt, the youngest man to ever serve as Chief of Naval Operations, this beauty leads a class of next-generation multi-mission missile destroyers. She features state of the art electric propulsion systems, armed with the latest war arsenal, while maintaining an elegant design to behold.

If you’ve never stood next to a vessel as astronomical and magnificent as a warship, perhaps you should add seeing one of these ships to your bucket list. The weight of things can be rather humbling, and these warships never disappoint!