Most birds flying around are very light with air sacs that allow them to stay inflight for long periods. While most heavy birds are considered flightless, some beat the odds and travel thousands of miles into the air.

Vultures, falcons, and eagles may be the common flying birds that appear heavy. However, they might not rank among the heaviest flying birds in the world.

Take a look at some of the heaviest birds that take up the air.

The Bustard bird family is known to have the heaviest flying birds, and the great bustard is one of them. It weighs a massive 44 pounds, and many ornithologists are impressed by its ability to fly over 2000 miles.

These birds can only be found in steppes and grasslands, with the males growing bigger than the females.

Africa is popular for having the heaviest non-flying bird—the ostrich. It might also be the primary habitat for one of the heaviest flying birds, the Kori Bustards.

An adult Kori bustard weighs about 42 pounds, bringing it closer to its European relative, the Great bustard.

The Kori bustard can only be found in African savannahs and grassland, feeding on snakes, berries, plants, and lizards. 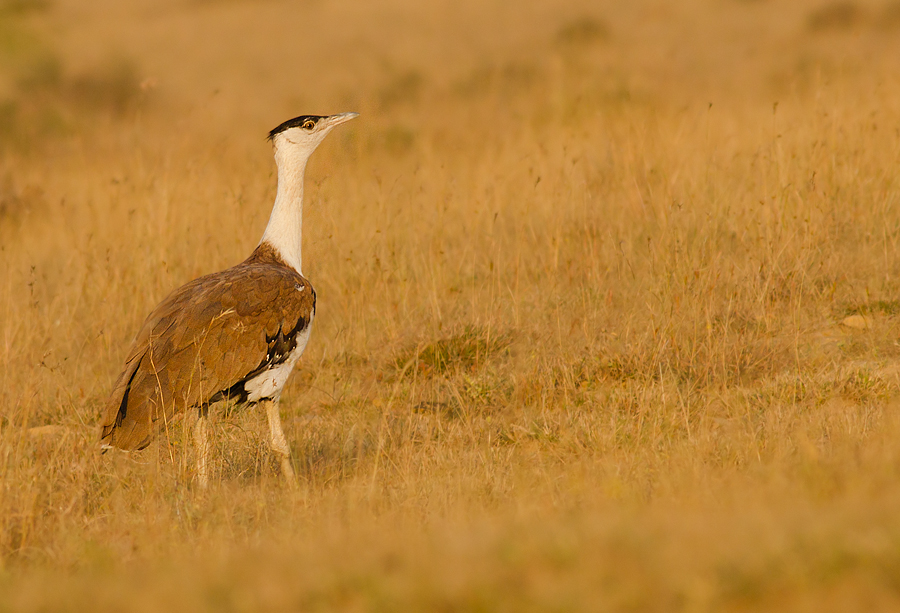 The Great Indian bastard comes third among the heaviest flying birds and bustards generally. This bird species is at the brink of distinction, with less than 200 birds globally.

It weighs a massive 40 pounds maximum, and similar to its bustard relatives, it also dwells in grasslands in India.

Trumpeter Swans are huge-sized migratory waterfowls that travel to Western Canada and Alaska during summer and move to the south during winter.

These snow-white birds weigh around 38 pounds and have one of the strongest bonds. They stay loyal to their mates until one passes away.

The Trumpeter swan also counts as the biggest waterfowl in North America. They tend to flap their wings while passing their feet on top of the water to gain speed for takeoff.

Mute Swans are commonly found in North America despite not being their native habitat. They originated from Asia and Europe and are some of the heaviest birds that can fly. An adult mute swan can weigh up to 31.5 pounds with a wingspan of around 7.8 feet.

Besides flying, these birds are unique—the black knob on the beak grows longer in males during mating season to distinguish sexes.

The origins of the Whooper swan can be traced back to Eurasia even though it is endemic to North America’s west coast. These migratory birds weigh about 30.8 pounds, making them some of the heaviest birds that can fly.

They have a wingspan of up to 9 feet to travel over long distances at higher altitudes.

The Andean Condor has its habitat in the Andes Mountains, which explains why it prefers living on higher cliffs. The extensive 10-foot wings can catch the rising warm air to help the birds fly with minimal effort.

The Andean Condor is also one of the heaviest flying birds with 30 pounds.

These birds are unique in that they are slow to reproduce despite living longer. They only lay one egg in a year.

The Dalmatian Pelican is the most massive member of the Pelecaniformes family and one of the heaviest birds that can fly globally. Its huge wingspan can extend past 11 feet and fly higher at a weight of 29 pounds.

These birds migrate in groups, drifting above water before dipping their heads underwater to scoop fish, their primary diet.

The Cinereous vulture is considered the second-largest prey bird before the Andean Condor. The two birds commonly live across Asia and Europe, facing a decline due to poisoning.

They weigh around 27.5 pounds and are some of the heaviest flying birds with a wingspan reaching 10 feet. They mainly feed on carcasses of other animals, and in the process, they might ingest poison used to kill the pest.

The Himalayan vulture is one of the heaviest flying birds and one of the highest-flying. This bird frequently glides at 5,000 meters above sea level with 26 pounds and a wingspan of 10 feet.

These massive wings combined with the pockets of warm air help this bird species fly with minimal effort.

The wandering albatross gets its name from its wandering nature of moving from the sea to breeding on land. Once a bird gets a pair, they mate for the rest of their lives, rearing only one chick each year.

These birds weigh around 22 pounds which is reasonable enough for a flying bird with a 12-foot wingspan. These birds can glide on air effortlessly for many hours without patching.

The Antipodean Albatross is another endangered bird species commonly found in the South Pacific. The bird can weigh over 19 pounds with an 11-foot wingspan that keeps it flying for long hours.

The Antipodean Albatross lays eggs every two years, and every time it wants to lay eggs, it goes back to its birthplace.

Both males and females are responsible for caring for and incubating the eggs and raising the young ones.

The Marabou stork is also known as the undertaker bird and primarily lives in wet and arid areas around the Sahara Desert. These birds can weigh up to 17 pounds with a 10-foot wingspan that supports their flying.

These birds look like they have underpants on when viewed from the back. Some Marabou Stork species have been claimed to have wingspans of over 13 feet.