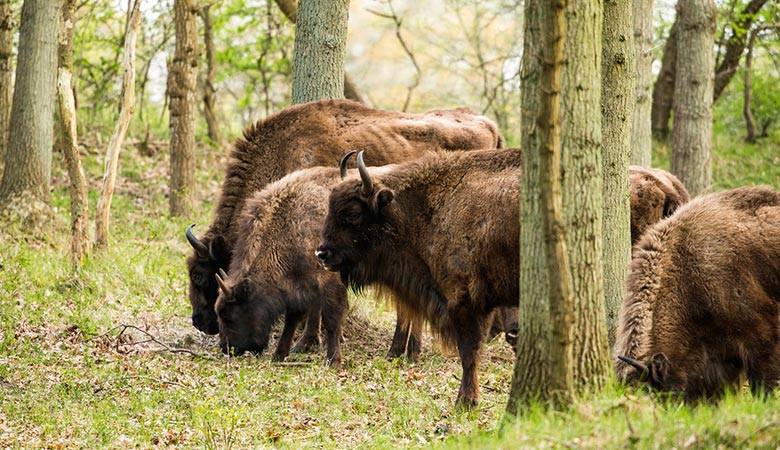 When most people think of Europe, they think of beautiful villages, rich history, and some incredible food. It is not known for housing some of the largest animals on Earth. Most of the time, people think of large animals being those that live on other continents such as Asia or Africa, but Europe has quite a few substantial animals that call it home.

What are the 15 Heaviest European Land Animals?

Although Europe is not known for having some of the largest animals in the world, they have a wide range of animals that all play a significant role in Europe’s landscape. Let’s talk more about these animals and where they are found.

One of the biggest problems that Europe faces in terms of the animal population is the lack of room for these animals to live in their natural habitats. Luckily, animals have been able to evolve to find new areas to live in.

A lot of the weight of the animals has to do with the environment they live in, as well as the history of the animals. Here is more information about each of these animals, which may explain more about why they can grow to the size they have been recorded at.

Recently reintroduced to their native land, European bison are the largest native herbivore to Europe. Although they can be confused with the American bison, they are smaller with longer hair. They can range anywhere from 1700 pounds up to 2200 pounds, and they average around 9.5 feet. They are typically found in areas of plains and meadows in Europe.

While you are not necessarily going to find a polar bear in France, they are found in areas of Greenland, Iceland, and regions of Siberia as well. Polar bears enjoy being by the sea since their diet is majority seafood based. Depending on where they live, polar bears can weigh as little as around 330 pounds, but their weight can go up to 1700 pounds.

While they are referred to my Moose in different areas of the world, the Eurasian Elk is the European name for an animal that most of us are familiar within North America. Found in areas of Scandinavia and to Asia, Eurasian Elk, or Moose, are formidable creatures who enjoy temperate regions with plenty of forests. Moose typically weigh anywhere from 590 pounds up to almost 1700 pounds.

Brown Bears are one of the most universally found animals on Earth. They are not only one of the heaviest land animals in Europe, but they are also found in the Americas, Asia, and even Africa. With the weight of a brown bear ranging from 175 pounds to 1300 pounds, they are a product of their environment.

Camargue horses are found in a distinct region of France that is more rugged and wild than the rest of the country. An iconic breed of horses is said to have carried the only cowboys Europe has ever seen and is one of the oldest in the world. Camargue horses can weight anywhere from 770 pounds up to 1100 pounds and are a strong horse breed.

Elk is another species that have been put at risk due to hunting. The Elk is an animal that can live in almost any climate and has been in Europe for years. They also have been introduced to other areas of Europe, such as Ireland. Elk has a wide range of weight, including smaller Elk coming in at around 148 pounds up to larger elk weighing approximately 1100 pounds.

Mostly found in extremely cold climates such as those in the Scandinavian region of Europe and the Siberian region of Norway, Musk Ox are native to the environment. Although they are a large animal, their weight averages from 400 pounds up to 881 pounds depending on the gender of the musk ox as well as where they live.

One of the few horses that have never been successfully domesticated, Przewalski’s horses lives in Europe’s difficult regions, from Spain to Asia. This transition is due to growth in the human population as well as a lack of food sources. They are extremely endangered, but zoos across the world are increasing the population. They are smaller than most horses but can weigh up to 800 pounds.

Similar to brown bears, wild boars can be found on almost every continent on Earth. This is primarily because they can exist in almost any climate, but enjoy temperate climates such as Europe, Asia, and North America. While they are considered an invasive species in some regions of the United States, in Europe, they often live in extremely rural areas and can range in weight from 145 to 600 pounds.

Most people refer to Deer as being the most common wild animal that you can see. Red Deer is the largest of the deer breeds, and it is widely considered the largest land animal in Scotland, Wales, and England. Red Stags are the male and are sought after by many hunters due to their size and impressive appearance. Females can weigh as little as 120 pounds, with the males weighing as much as 450 pounds.

Many of the reindeer that are still in Europe have been domesticated. The most popular type of reindeer is those that live in cold climates such as tundra. Most often found in areas of Europe such as Scandinavia and Russia. Forest reindeer are still around, but they are slowly becoming endangered due to the loss of their habitats and hunting. Reindeer are sometimes referred to as Caribou and can be found in colder regions of North America. A reindeer can weigh 180 pounds up to 400 pounds.

Gray Wolfs are the largest canines in the world. Mostly found in Western Europe, they can live in a wide variety of climates from northern areas to locations such as Southern Mexico in Central America. Gray wolves typically are around 51 pounds up to 200 pounds, but larger ones have been discovered in more remote regions where humans do not take over lands, and food sources are substantial.

Eurasian lynx is found all over Europe, but they have concentrated around in Eastern Europe and near Russia. They can be challenging to see as they are shy animals who prefer the protection of the forest. The Eurasian lynx can be found in a variety of climates as well as elevations. Although they only weigh up to 100 pounds, they are considered the big cat of Europe.

While a wolverine is not the biggest animal out there, it is considered one of the top five predators in Europe. They are private animals who prefer the quiet rural areas of Europe, but they tend to travel a lot during the day to find food. Wolverines can weigh up to 60 pounds with a healthy diet.