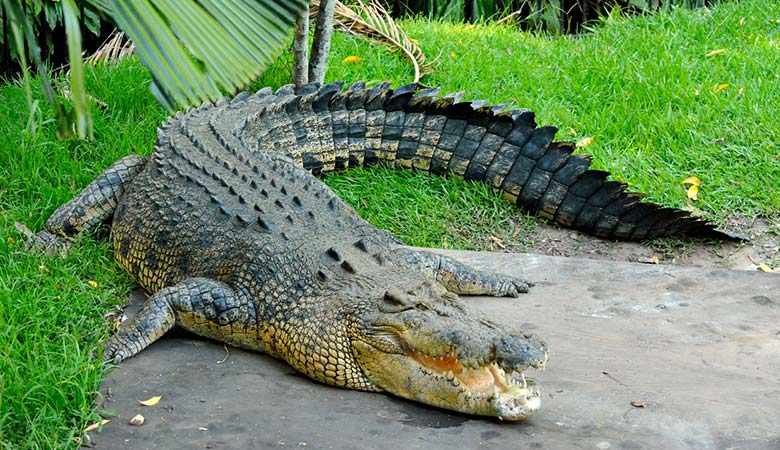 With films like Jurassic World, the subject of reptiles has had a resurgence in the minds of kids and adults alike. When we look into the wild, many reptiles species look terrifying. While we aren’t afraid of a velociraptor coming out of the bushes to eat us, some living reptiles are big enough to feed on a human.

The largest crocodilian specimen that is known measured a little over 22 feet. There are unconfirmed reports of larger crocodilians. Examinations of incomplete remains show a length of 23 feet and 4400 lbs.

The Galápagos tortoise is the largest and heaviest living species of tortoise. Giant tortoises only live in two areas, one of which being the Galápagos Islands.

The Galápagos tortoise is native to the seven of the islands. The reptile is one of the longest-lived species of vertebrates, living well over 100 years. Charles Darwin observed the differences between the distinct shells had a connection in which the environment the tortoise lived in. The more humid islands had tortoise shells that were larger and domed shaped. The tortoise also had a shorter neck on the humid islands.

The giant tortoise does not have any natural predators. Sadly, the extinction of these animals is because of human interference.

The slender-snouted crocodiles are a critically endangered species. Their namesake comes from their long slender snout that they used to catch their prey.

This medium-sized animal is native to fresh-water habitats in western and Central Africa. We can find these crocodiles in heavily vegetative bodies of water; the vegetation helps them hide from their potential prey. The diet of the slender-snouted crocodile comprises fish, amphibians, and crustaceans.

The Loggerhead sea turtle is a vulnerable species of sea turtle found in the Atlantic, Pacific, Indian oceans, and Mediterranean Sea.

Loggerhead sea turtles spend most of their life at sea, except for the females who come to shore briefly to lay their eggs. A reason for the vulnerable status of these turtles is because of the females only laying on average of four eggs. Once the females lay their eggs, they do not lay eggs for another 2 to 3 years.

The diet of the Loggerhead sea turtle is mostly omnivorous, feeding on the bottom-dwelling invertebrates.

The Aldabra giant tortoise is native to the Indian Ocean islands of Seychelles. This tortoise has a similar shell to that of the Galápagos tortoise, being domed-shaped.

The Aldabra giant tortoise is a herbivore that eats mostly grass, leaves, and plant stems. Occasionally, they will eat the dead bodies of other deceased tortoises. In captivity, we know them to eat apples, bananas, and vegetable pellets.

These tortoises are a vulnerable species. The females lay between 9 and 25 fertilized eggs, although less than half are fertile.

The False Gharial is a crocodilian, also known as the Malayan and Sunda Gharial. We consider them “false” because their snouts are similar to true crocodiles rather than the characteristics of other Gharial species.

They inhabit rivers, lakes, and swamps in Malaysia, Indonesia, and Thailand. Until recently, it was thought that the diet comprised only fish and smaller aquatic animals. We have seen adults preying on monkeys, macaques, deer, birds, and reptiles. There have even been reports of a false Gharial attacking a cow.

In place 9 of the heaviest reptiles in the world we have the Mugger crocodile which is a vulnerable species found in Southern Iran to India. We can find this crocodile in lakes, rivers, marshes, and even artificial ponds.

In extreme temperatures, either hot or cold, both male and female muggers dig burrows to retreat from the hot or cold temperatures. The females lay up to 46 eggs and are still considered to be a vulnerable species. The young mugger crocodiles will eat insects, and the adults feed on fish, reptiles, birds, and mammals.

While young American alligators will feed on invertebrates, the adults will prey on fish, amphibians, reptiles, birds, and mammals. Interestingly, the males use infrasound to attract females during the mating season.

We also know the gharial as the fish-eating crocodile. The name is fitting because of the long thin snout and sharp teeth ideal for catching fish. The gharial can be found in the rivers of northern India.

What is interesting about the gharial is that it is mostly and an aquatic crocodilian. It only goes on land for building their nests in moist sandbanks and basking. The gharial can lay between 20 – 95 eggs in a single season.

The American crocodile is a heavy reptile that prefers to live in coastal areas; however, it can also be found in rivers, lakes, swamp, lagoons, cays, and small islands. They can live and thrive in saltwater and have been found on beaches and islands without and freshwater source.

This crocodile is potentially dangerous to humans, yet not as aggressive as other crocodilian species are. The snout of this crocodile is broader than other species of crocodile, which allows its diet to be more diverse.

When these crocodiles are hatchlings, they feed on various insects. Once the American crocodile is fully grown, the variety of prey widens considerably. An adult American crocodile can feed on full-grown cattle, birds, mammals, turtles, crabs, snails, and frogs.

The black caiman is a carnivorous Alligatoridae that lives by slow-moving bodies of water, like rivers and lakes in South America.

The black caiman preys on fish, other reptiles, birds, and mammals, which makes it the largest predator in the Amazon.

The females can lay up to 65 eggs during the dry season in nests of soil and vegetation. 6 weeks later, the eggs will hatch when the wet season resumes once again. Sadly, most baby black caimans do not make it to full maturity. The babies are fiercely independent and will stray from their mothers, where they are vulnerable to predators.

This turtle is also known as the lute, leathery turtle, or just luth. The Leatherback is the largest of all the turtles and is the fourth heaviest reptile behind crocodilians.

Instead of a bony shell, the shell is covered with skin and oily flesh. The Leatherback travels far — it has been found as far north as Alaska and Norway and as far south as the southernmost tip of New Zealand. They feed on jellyfish and help control the jellyfish population.

The third of the heaviest currently living reptiles are the Orinoco crocodile. It is a critically endangered species of crocodile that is found in the rivers of Columbia and Venezuela.

Due to extreme poaching of their skin, the Orinoco is critically endangered. The small population makes it challenging to observe in the wild. We speculate they are opportunistic predators that feed on a variety of reptiles, fish, birds, and mammals.

When the water is low in the dry season, the Orinoco will lay their eggs by digging their nests in the sand.

The Nile crocodile is the second heaviest reptile in the world. It’s dangerous and is responsible for hundreds of human deaths a year. They are native to freshwaters in 26 African countries. It can live in saltwater conditions, although it is rare to find them in saltwaters.

The Nile crocodile is an opportunistic apex predator that feeds on fish, reptiles, birds, and mammals. They are also patient, able to sit and wait to ambush their prey for hours to weeks before they attack.

They are social creatures by sharing basking spots and abundant food sources. The younglings are independent and do their hunting because their parents do not feed them, only watched over for some time.

The Saltwater crocodile is the heaviest living reptile. It is a large opportunistic predator that ambushes its prey and then drowns the prey before swallowing it whole.

They are known to killing other predators that challenge its territory, like sharks. We can find the Saltwater crocodile in saltwater and wetlands from India, Asia, Sundaic, Australia, and Micronesia.

A female lays 40 to 60 eggs, and some nests have been found to have up to 90 eggs. Despite being hunted for their armor-like skin, the Saltwater crocodile is not in danger for extinction, and it is considered “least concern.”

Just look at this heavyweight giant eat these ribs: