The Sikorsky R-4 was the first helicopter to reach full-scale production in 1942, and since then, helicopters have been in our faces, in movies, at official occasions, and in a variety of other settings.

While helicopters have a variety of functions, this page aims to educate you about the world’s heaviest helicopters, regardless of their primary use.

The Halo has been sold to 20 countries throughout the world since its debut at the Paris Air Show in 1981. The helicopter is available in 13 variants and can lift to 56,000kg. It is used for both military and civilian missions.

The Mi-26 was developed in the early 1970s with the lofty goal of creating a helicopter with twice the load capacity of any other helicopter. India was the first country outside of the United States to purchase a Halo.

Mil Mi-10 (NATO codename: Harke) is a flying crane version of the Mi-6 helicopter produced by the Mil Moscow Helicopter Plant in Russia.

The Mi-10 entered service in 1962. Many of the helicopter’s components and systems, such as the engines, transmission, and rotor system, were preserved.

The Mi-10 can taxi over large loads thanks to its compact fuselage and four tall undercarriage legs. The helicopter can carry up to 28 passengers and has a maximum takeoff weight of 43,700kg (96,340lb).

Two Soloviev D-25V turboshaft engines, each with a maximum power output of 4,100kW, power the Mi-10 (5,500hp). The Mi-10’s massive external fuel tanks give it a maximum range of around 430 kilometers. 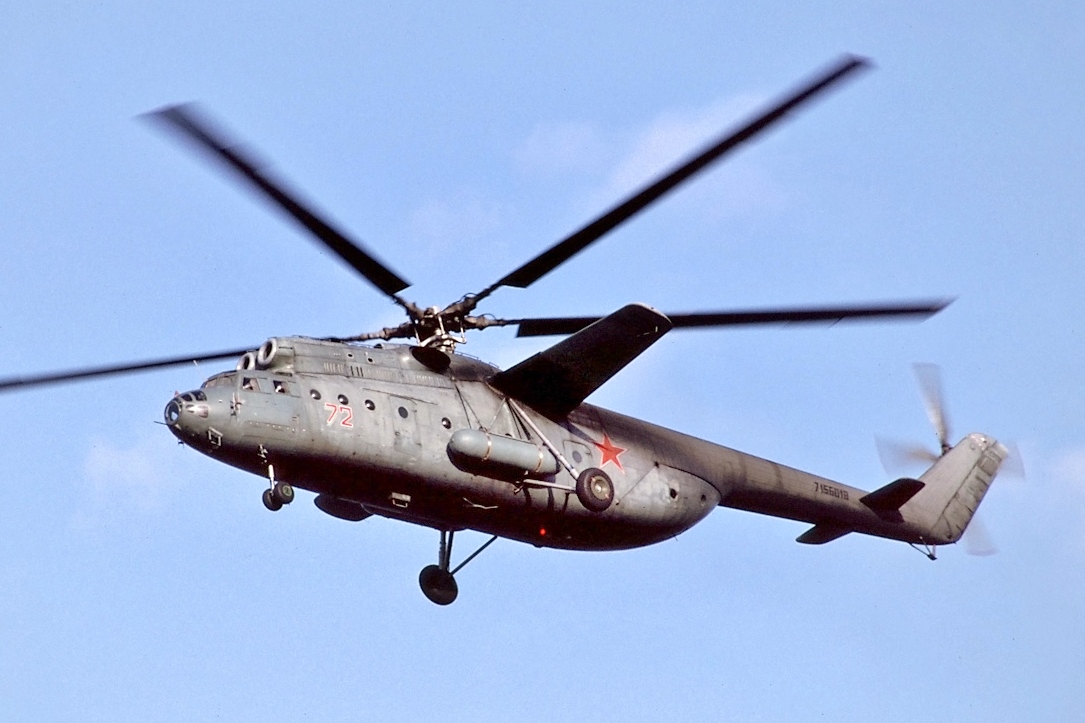 When it first took to the skies in 1957, the Mi-6 (Nato code name: Hook) was the world’s largest helicopter. Mil Moscow Helicopter Plant produced over 900 Mi-6 helicopters until production halted in 1981, catering to both civil and military purposes.

The Mi-6’s huge fuselage can carry 65 armed troops or 41 litter patients, including two attendants, as well as a variety of heavy goods, such as cars. The helicopter can take off with a maximum weight of 42,500kg (93,700 lb).

The CH-53 Super Stallion is a heavy-lift transport helicopter based on the CH-53 Sea Stallion. It is now the largest helicopter in the US military’s inventory.

The CH-53 can carry a 155mm howitzer, along with its crew and ammunition, with a lifting capacity of more than 33 tons.

The Super Stallion helicopter is used by the US Marine Corps’ heavy-lift helicopter squadrons, and it is an important part of the composite squadrons that transport heavy equipment and supplies for amphibious assault missions.

The V-22 Osprey is a multi-mission helicopter developed as part of a strategic cooperation between Bell Helicopter and Boeing.

It’s a high-speed plane that can transport people and cargo quickly. It can transport 24 combat personnel or up to 15,876kg (35,000lbs) of internal and external cargo.

Osprey was created to satisfy the unique needs of four US military services. It’s a helicopter-style tilt-rotor aircraft that takes off and lands like a helicopter. It can land or take off vertically and reach altitudes of up to 280 kilometers per hour.

It has two powerful Rolls-Royce engines, the nacelle of which can be turned to convert the plane to a turboprop. The engines provide a massive amount of power.

Boeing’s CH-47 Chinook helicopter is designed to carry big loads. Multiple transport missions are possible with the Chinook. It debuted in 1962 and comes in a variety of configurations.

The helicopter is primarily utilized for transporting troops, supplies, and battlefield equipment on the battlefield. The helicopter may also be used for medical evacuations, disaster relief, search and rescue, aircraft recovery, firefighting, parachute drop, heavy construction, and civil development missions, making it a real multi-mission helicopter.

The first flying crane helicopter with an aft-facing pilot station was the Aircrane. The helicopter’s length is 26.97 meters. It has a six-bladed main rotor and a four-bladed tail rotor with a diameter of 21.95m. The helicopter’s maximum takeoff weight is 19,050kg (42,000lb).

Its rugged construction and adaptable structure allow it to operate in a variety of conditions, including maritime, tropical, and frigid.

When utilized as a hospital, it can hold 30 passengers in transport missions and 16 stretchers. Two pilots can be accommodated on the flight deck. In cargo mode, the helicopter can be flown by a single pilot.

The helicopter weighs about 8,300kg and can take off with a maximum weight of 15,600kg.