Sports are very interesting and engaging, especially when they fall under the wrestling category. Many people have seen huge fighters in MMA and UFC, but nothing compares to the gigantic sumo wrestlers.

Sumo wrestling is particularly unique because it originated from Japan, and has unique rules and fighting styles. Sumo wrestling is Japan’s national sport and people can practice and play sumo as a profession.

Sumo fighters have unique dietary needs and this is one reason why they grow bigger than normal. If you are curious to know who are the biggest sumo wrestlers to ever live, then keep reading because we cover the top 10 heaviest sumo wrestlers.

Orora Satoshi takes the lead for being the heaviest sumo wrestler ever. He weighs a record-breaking 645 pounds (292.6 kg) and fights in the highest makushita sumo division.

Orora’s weight makes him bigger than all his opponents and in 2012, he fought against Ohara who weighed 183 lbs., making this match the largest weight disparity in history.

At the time he weighed approximately 420 lbs. (190 kg). However, Orora’s heavyweight has been a liability to him, winning only half his matches due to poor speed and agility.

Even though he is not a Japanese sumo wrestler, Konishiki is quite popular in the country and also the first non-Japanese wrestler to reach Ozeki, the second-highest sumo level.

He also ranks as the second-heaviest sumo wrestler winning three Top Division Championships also which almost made him become the first non-Japanese ‘yokozuna’.

At the peak of his career, Konishiki weighed around 633 lbs. (287 kg) which earned him nicknames like “Dump Truck” and “Meat Bomb”. Since 1996, Konishiki was the heaviest and biggest sumo wrestler globally before Orora displaced him in 2017.

Yamamotoyama is a Japanese-born sumo wrestler from Saitama city. Although he retired from active sumo wrestling, his name still gets mentioned among the heaviest sumo wrestlers ever.

Yamamotoyama used his weight to his advantage and won most National and International Sumo championships.

Yamamotoyama once shocked people when he ate 146 sushi pieces in one sitting, which explains how he could become so heavy at only 37 years old.

Born in 1993, Dewanojo Shuta might be one of the youngest Japanese sumo wrestlers at 28 years old. His highest sumo wrestling rank is the Makushita 56 which places him higher than most fighters in the list.

Dewanojo is still an active sumo wrestler, competing in both Japanese and international championships in which he has won a few titles. His skills and ability to maximize his weight make him one of the promising sumo wrestlers.

Kenho Mitsuo is a Japanese sumo wrestler who is popular among the national sumo championships. Osaki weighs a massive 204 kgs at only 32 years old.

He also ranks among the biggest sumo wrestlers, standing at 180 cm tall. As an active wrestler, Kenho achieved his highest ranking of Makushita 59, which is quite impressive.

His skills and fighting abilities make him one of the best sumo wrestlers with a bright future in the sport.

Tominohana is a Taiwan-born professional sumo wrestler hailing from Keelung. He wrestled for only four years, debuting in 1988 and retiring in 1922.

His highest rank was the Jonidan 31, and at his peak he weighed 351 pounds (241 kg) making him one of the biggest and heaviest sumo wrestlers ever.

Tominohana used the yotsu-sumo wrestling style that only required pushing, grappling and thrusting which means his weight gave him an advantage.

He has won more than half of his sumo battles with an easy forceout on his opponents. 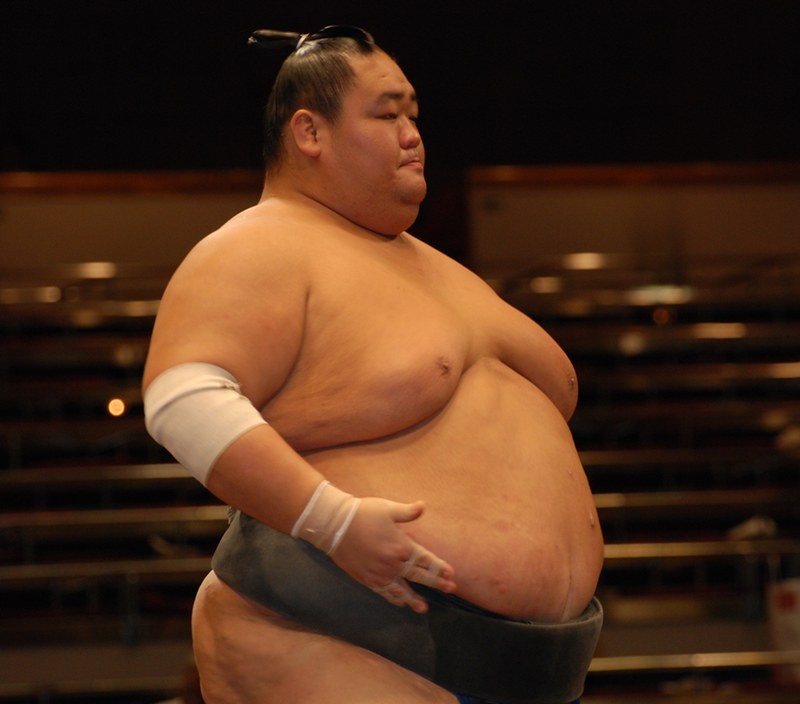 His 175.5 stature makes him quite gigantic, dwarfing most of his opponents. Kainowaka’s highest rank was the Mukushita 14 and recently took part in the Hatsu 2021 tournament that was held in Ryogoku Kokugikan, Tokyo.

Musashimaru first appeared in sumo wrestling in 1989 and by 1991, he had already made the top division on Makuushi.

However, once he reached the Ozeki division in 1994, his progress stalled before picking pace in 1999. He ranks among the top non-Japanese sumo wrestlers to ever reach ‘yokozuna’.

He stood at 192 cm tall, weighing over 522 lbs. (237 kg) which helped him get through the sport without sustaining any injuries.

He has amassed a huge fan base in Japan due to his close resemblance to Saigo Takamori, a widely respected Japanese warrior.

Akebono Taro is a Hawaiian sumo wrestler with Japanese roots. He is the first foreign sumo wrestler to rank as a ‘yokozuna’ considering he was trained by Takamiyama who was a pioneer sumo wrestler from Hawaii.

At his peak, Akebono weighed around 520 pounds (236 kg) which gave him an edge over the competition.

Throughout the eight years of being a yokozuna, Akebono suffered numerous injuries but that did not stop him from winning numerous championship titles.

Sumo wrestlers are quite heavy, and it seems like the heavier you are, the more likely you are to win. Even though these individuals get to enjoy fame through their sport, sumo wrestlers typically have a shorter life span.

This is mostly contributed to by their excessive weight which may expose them to life-threatening conditions like diabetes. While most of them have retired, some are still active and are still breaking records day in, day out.