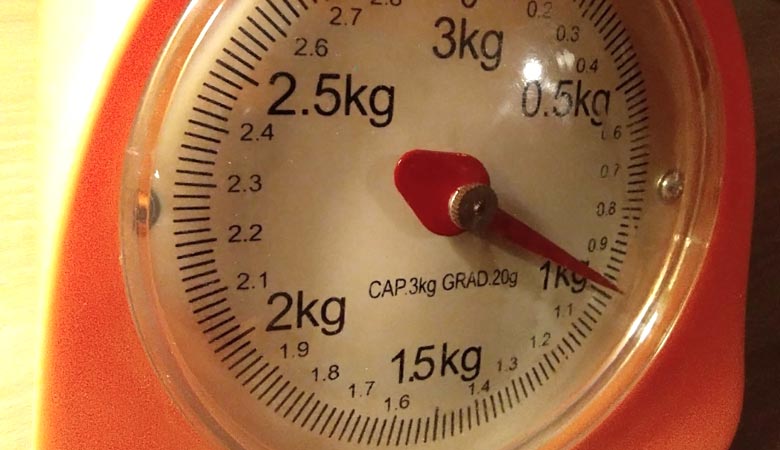 Many things in the world weigh only one kilogram. For those familiar with US measurements, one kilo is equivalent to roughly 2.2 pounds. This list features objects and animals that weigh one kilogram (or very close to it).

Here is a list of 24 objects and animals that weigh one kilogram:

As you can see, many animals and household objects weigh one kilogram. Continue reading to find out more about each item on this list.

One Liter of Water

One liter of water is equal to almost exactly one kilogram when measured at max density. One gram is one milliliter, and one thousand grams is a thousand milliliters. Therefore, one liter equals one kilogram.

The Japanese marten weighs 1 kilogram at adulthood. This weight is made up mostly of their bodies because they have a small skull and bushy tail. Fun fact: A group of Japanese martens is called a richness.

Hispaniolan Solenodons weigh 1 kilogram as adults and only 0.1 kilograms at birth. They are similar to a shrew but are a bit bigger. They have long snouts, and most of their body weight is found in their bodies since their skulls are small and their tails are long and skinny like rats.

The average pineapple weighs anywhere from 2-5 pounds, putting some of them at the 1-kilogram mark. Fun fact: Some pineapples weigh up to 20 pounds! Their stems and leaves are just for catching water, so their weight is contained in the fruit inside.

Similar to the Hispaniolan solenodons, Cuban solenodons are rat-like creatures with short legs that weigh 1 kilogram as adults. They have a diet of snakes, frogs, and crabs, and they like to burrow. They were thought to be extinct in 1970, but in the mid-1970s, a trapper caught three of them, proving they were still around.

A Bunch of Bananas (or Eight Apples)

If you weigh six to eight bananas, you will end up with about 2.2 pounds or 1 kilogram. A big bunch of bananas will meet this 1-kilogram requirement, as will about eight apples!

Lesser Grisons are long-necked and small-chested with short legs and a small skull, and they weigh 1 kilogram. Although they appear bigger than the last few animals, their diet of grasshoppers keeps them slim.

Fennec’s foxes are the biggest animal on this list, and they weigh only at 1 kilogram as an adult. When born, they weigh around 0.029 kilograms. It takes about 300 days for this species to reach maturity.

A Bag of Rice

The ringtail is a member of the raccoon family and weighs 1.015 kilograms. At birth, they weigh only 0.03 kilograms, and at weaning, they weigh about 0.259 kilograms. It takes them 300 days to mature fully but only 42 days to wean.

A Bag of Sugar

One sugar cube is 4 grams, or one teaspoon, of sugar. You would need 250 cubes or teaspoons of sugar to equate to one kilogram. In a two-pound bag, you get roughly 1 kilogram worth of sugar.

Black-footed ferrets are 45 centimeters long, and their weight ranges from .9 kilograms to 1.36 kilograms. These ferrets are classified as extinct in the wild because there are so few of them. Fun fact: They are both predators and prey for prairie dogs.

Some toasters are lightweight and stay near the 2-and-a-half-pound mark. Toasters that have a simple style to them are more likely to weigh 1 kilogram than those with more complex designs.

The Lemuroid ring-tailed possum is 1.04 kilograms in weight. The males tend to be larger than females. Their bodies are about 12 inches long. Their tails grow to about 11 inches.

The Servaline Genet is in the Carnivora family and weighs 1.055 kilograms as an adult. They are 16 to 24 inches long. Their weight distribution is similar to ferrets with long bodies and rings on their tails. Fun fact: Servaline Genets are nocturnal creatures and are rarely seen in the daytime unless it is rainy weather.

A Half-Rack of Baby Back Ribs

Sables are 1.067 kilograms at adulthood and a tiny 0.03 kilograms at birth. Their body mass is closer to 1.25 kilograms, and they are around 12 to 22 inches in length. Fun fact: Over half of the world’s Sable population is under two years old!

A Pair of Woman’s Shoes

The furry, spotted carnivorous Eastern quoll, has an adult weight of 1.09 kilograms. Their body masses are only 0.945 kilograms because of their metabolic weight. Their diet consists of insects, small rodents, and fruits, which keeps them at this slim 1-kilogram weight.

You might be familiar with Greater Galagos, who, as adults, weigh 1.095 kilograms. Males take 639 days to mature while females only take 495. Fun fact: Greater Galagos are skilled jumpers. They can jump almost 7 feet high!

The Coppery Titi weighs 1.12 kilograms when fully grown. They are 0.074 kilograms at birth, and it takes them over 200 days to reach their adult sizes. They are found in Brazil and Peru.

Prairie dogs weigh 1.125 kilograms as adults. For females and males alike, it takes 730 days to reach this state of maturity. Fun fact: Groups of black-tailed prairie dogs have many different names, including pack, gang, and legion.

Although their name suggests it, mountain beavers are not related to beavers. They weigh 1.125 kilograms as adults. Fun fact: Mountain beavers build very extensive burrow systems. They even build separate places in the burrows for storing food and collecting their droppings!

Eastern Cottontail rabbits are commonly found in Canada and the US, and they weigh 1.15 kilograms at adulthood. Fun fact: Their colors can range from reddish-brown to gray, but all of them have fluffy, “cotton ball” tails, which is where their name comes from.

The weight of things around us is not something that we often contemplate. So, finding out the weight of common objects and animals that you see is interesting – and it can make for great conversation if you’re ever in need of an ice breaker!