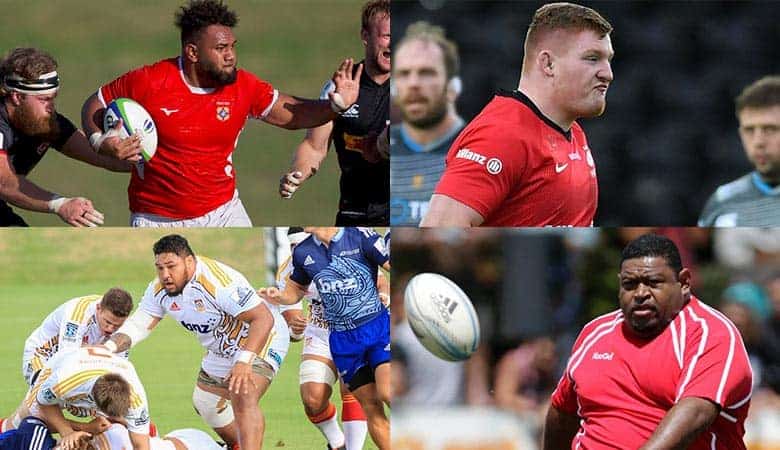 Rugby is a game of big hits and even bigger players. Since players don’t have thick padding like in American Football, they need a bit of padding in pounds or kilograms. At well over two hundred and eighty pounds, all of these rugby players are some of the fittest big men in the world of sports.

At six feet six inches tall, Konstantine Mikautadze is a walking mountain of 279 pounds who puts a hurting on people as a #4 or #5 lock position player. His current rugby team is Montpellier, where he has played as a lock since 2016, and is currently in a two-year contract with the team.

Mikaautadze is a highly rated lock with over twenty European Cup appearances. As far as a combination of height and weight, few can match up against Konstantine Mikautadaze from Georgia. (Source: Ultimate Rugby)

One of the most versatile players on the New Zealand All-Blacks, Tunisia Moli, can dominate on both sides of the scrum, coming in at 280 pounds. His height and weight make for a sturdy build that culminates at an impressive speed.

After he suffered a leg injury in 2018, he had several surgeries and a bad year. But in 2019, Moli came out strong and helped the ALl-Blacks to a top-eight placing. (Source: All-Blacks)

Recently, Paul Alo-Emile and his home country of Samoa had a poor showing in the World Cup. However, Alo-Emile is one of the largest rugby players globally, weighing in at 284 pounds and has made a name for himself as a tight-head-prop who is short, strong, and thick.

Standing five feet nine inches tall and weighing in at just under three hundred pounds gives you the perfect body type to be pushing into other people from a close distance. Paul Alo-Emile has great upper body strength, and the padding needed to take the full brunt of force at the front of the scrum. (Source: Rugby Pass)

Tongan players are notorious for their immense size and strength. Zane Kapeli, weighing in at 284 pounds, is one of the largest men to play the game of rugby today and ranks number ten all-time.

Born in 1992, the youngster still has plenty of years of playing ahead of him. Currently, he plays for the Bay of Plenty Steamers as a loose forward. Kapeli also made his Rugby World Cup debut recently playing for Tonga, his home country. (Source: The Highlanders)

Kapeli is currently rocking a large afro hairstyle, so he might even have gained some weight since his last vital check. Regardless, Kapeli is a massive rugby player who hasn’t reached the prime of his career and is someone to watch for big hits and an even bigger heart.

Weighing in at 291 pounds, Tupou started his career with a bang scoring a hattrick of tries in his first official match and lighting up highlight reels ever since.

In 2020, he had a successful season with over 30 tackles and three tries. As a player in his late twenties, Tuopou is just hitting his stride as a professional and entering his prime as one of the largest bruisers in the game. (Source: Rugby.com)

As a newer member of the Wales rugby team, Rhys Carre is a 293 pound force to reckoned with and has been called up to the Wales team for the Six Nations tournament in 2020.

Carre has weighed in at over 300lbs in other seasons, and is just below that for this year. At 22 years old, Carre is ranked as one of the top 40 rugby players in the Six Nations tournament. Carre has also participated on the international stage with Wales and competed on two professional teams in England all before his true prime. (Source:  Rugby Press)

Takaki may be older, but this six-foot one-inch, 293 pound prop has the size that puts hurting on people. Despite his size and strength, this Tonga player is ranked in the 200s worldwide and a 40 out of 100 skill attributes. (Source: Rugby Pass)

As one of only a few rugby players weighing in at over 300 pounds on this list, James Johnston is a Samoan player with great talent.

As a prop, Johnston combines strength and size to be one of the world’s top fifty players. (Source: Rugby Pass)

The big man also has a great sense of humor to go along with his big smile stating in a recent interview, “I guess you could say the food bills were pretty hefty in our household when I was growing up.” (Source: The Guardian)

The weight of this behemoth rugger has always been widely discussed. Tameifuna was recently ordered to lose 20 kilograms of weight after he showed up to the Rugby World Cup practices at one of the heaviest weights of his career. (Source: Rugby Pass)

Currently, “Big Ben” plays in France at 352 pounds and has declared, “I pretty much promised myself on that day, ‘I’m never gonna get back to that 160kg bracket ever again.'” (Source: Rugby World)

The massive Fiji player named Bill Cavubati is a player who strutted his weight on the professional rugby stage and was awarded over 30 caps in his career.  Even though he didn’t stay at this massive weight for all of his careers, he was and still is one of the largest men ever to play the game of rugby on the International stage. He was also fairly successful in his tenure.

He was an enormous man, with strength that sometimes got him into trouble. In 1999, he was supposedly charged and convicted of assault. However, the sentence was dismissed so that he could play in a World Cup qualifier against Tonga. It just goes to show you that weight can actually help you get out of trouble if you know how to use it. (Source: Daily Mail UK)

Rugby is an incredibly physical game, and athletes have to be both strong and fast. The stamina required is incredible, especially for some of these big men who weigh close to 300 pounds or more.

It’s no surprise that most of these players are some of the best in the league and are also well suited for their positions in the scrum as either locks or props.  Their extra girth, especially in the upper body, provides them with the patting needed to take the abuse of the scrum and to make big stops and tackles.  Hopefully, now you know a little bit more about the most significant and heaviest rugby players.