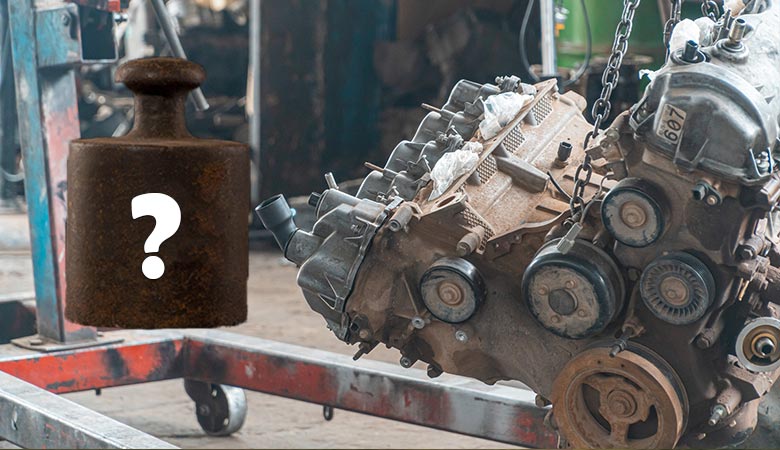 Cars have evolved immensely over the course of history. From the first self-propelled vehicle to the first vehicle powered by a gas engine, and they are steadily evolving.

Cars need a way to convert power into motion to make them movable, and this is what makes the engine such an interesting feature.

The weight of a car engine varies and has many components, but the average engine (not including the transmission) weighs around 350 pounds, or 158 kilograms. Car engines can weigh up to 1,000 pounds (432 kilograms).

We buy a car to take us from one point to another. The one thing we know we have to do in order for it to work is to fuel it. We put the gas in the fuel tank and go. Let’s take a look at what’s driving the fuel that’s allowing us to drive.

Cars With The Biggest Engines

The largest car engine ever made was the 28.5-litre engine that was made for the Fiat S76 in 1910. Today, the SRT Viper, Bugatti Veyron, and Chevy Corvette are among the biggest engines. We’ve included some additional weights for comparison:

Cars With The Smallest Engines

From 1962 to 1965, the Peel P50 was on the road, and is known for being the smallest production car ever. The engine, a 49cc single-cylinder, was even smaller. Today, some of the smallest engines produced include the following:

In a diesel engine, the air is compressed first, and then the fuel is injected. Because air heats up when it’s compressed, the fuel ignites. Diesel engines are used to power freight trucks, large tractors, locomotives, and marine vessels. While most automobiles are powered by gasoline engines, there are a few that are powered by diesel.

These are not your traditional engines. Electric engines get their power from rechargeable batteries. They also power other electrical equipment within the vehicle. An electric motor converts electrical energy into mechanical energy. Even though these engines did not become popular until the late 90’s, the first electric car was produced in the late 1880’s.

Single-cylinder engines have only one cylinder connected to the crankshaft. They are compact, lightweight, and have a better weight to power ratio. These engines are used in motorcycles, motor scooters, dirt bikes, and go-karts.

The name says it all here. The cylinders and pistons for this engine are aligned in two separate planes, and are shaped in the form of a “V” when viewed from the top. The “V” configuration generally reduces the overall length of the engine, the height, and the weight compared with an equivalent inline configuration.

An engine has many components that provide the driving force to get you where you need to go. Proper care and feeding of your engine will keep it performing well for a long period of time. However, assumptions have generally been made about vehicles based on the size of its engine.

Don’t let the size of an engine fool you. Most believe the size of a car engine, determines the performance of it. Larger engines are usually put inside of high-performance cars and provide faster acceleration and speed. But it should also be noted that heavier engines affect braking performance. The more a car engine weighs, the less control it has over transitions and lane changes.

This is a good place to note that the average weight of an engine in the IndyCar Series is 248 pounds, which is smaller than the average car’s engine. Let’s not forget fuel efficiency. Lighter weight cars are known for being more fuel efficient. However, as cars have become heavier, advancements in powertrain technologies are also underway.