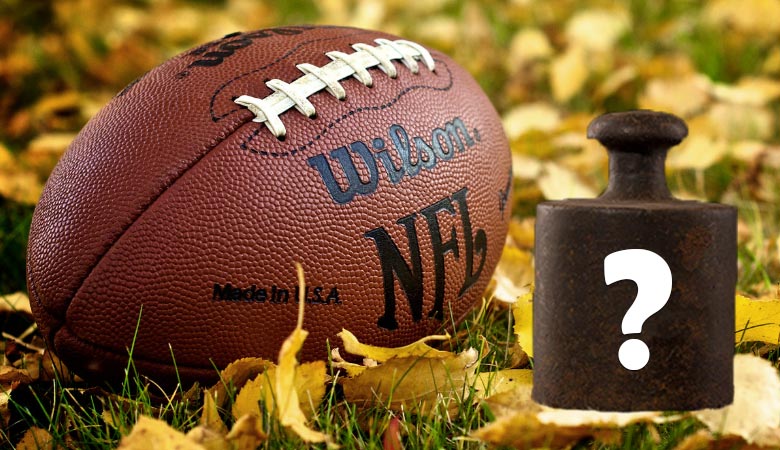 Ball-based sports that use what we commonly refer to as a football are without a doubt the most popular sports played all over the world.

But the weight of both the spherically-shaped ball (such as balls used in soccer), or prolate spheroids (balls used in rugby and American football) has changed by a fair amount over the years.

The early versions of football that consisted of an inflated pig bladder, wrapped in cowhide and tied together with laces certainly weighed a lot more than modern footballs.

So,  what is the weight of a football? In order to answer this question properly, we need to consider all the many variables there are.

The weight of a football will vary depending on both the gender and age of the people taking part in the sport in question. Usually, footballs used by high school kids will be lighter than those used by adults.

Additionally, females involved in one of the football sports we are covering in this article will often use lighter balls compared to their male counterparts.

Broadly speaking and covering all five sports in this article, footballs can be anything from 350g (12.34oz) for a size 4 soccer ball to around 500g (17.63oz) for a regulation Gaelic football.

Soccer, also known as football in Europe and other major footballing countries uses a spherically-shaped ball that can vary quite a bit on what it weighs.

Association football, the official term for soccer, comprises 11 players on each side – each team doing their best to score in the opponents goal at the other end of the pitch.

But when we look at what the average soccer ball weighs, this will be down to the rules by the sport’s governing bodies.

The main regulator for association football is FIFA, the Fédération Internationale de Football Association, which oversees rules related to the size and weight of footballs used in official FIFA matches.

The standard weight for soccer balls used in such tournaments including FIFA World Cup games will fall into two categories.

Otherwise known as American football or just football, this contact sport popular all over the United States and in other parts of the world uses a lemon-shaped football.

In regulated competition, the football used in gridiron matches and sometimes referred to as a lemon-shaped ball due to pointed ends will need to be around 410-460g (14.46-16.22oz) to adhere to the rules.

And just like with other football-type sports, National Football League footballs will vary in weight depending on the gender and age of the players.

The ball used in Women’s American football being slightly smaller and therefore a bit lighter than balls used by men involved at both college and professional level.

Australian football or simply known as Aussie rules, is a type of football match played between eighteen players on each side.

A prolate spheroid-shaped ball, the football used in Aussie rules football is very similar to the regular ball used in rugby.

And the enforcement of just one of many rules for this popular Australian version of football (the ball’s weight) is overseen by the AFL Competition Committee.

One of the sports in the group of ‘Gaelic Games’ played throughout Ireland and other regions of the globe, this football sport is played between two teams of 15 players.

And contrary to what some people are led to believe, the type of football used in Gaelic Football is the classic spherical shape such as the ball used in soccer.

Each ball weighs anything from 480-500g (17-18oz), making it the sport with potentially the heaviest football used in both amateur and professional matches.

The leather football, consisting of 18 stitched panels, can be kicked or passed by hand.

Named after the school at which it was first played, Rugby School, this extremely popular sport in the United Kingdom and worldwide uses a prolate spheroid ball.

However, there are two main groups for this sport  – namely Rugby Union and Rugby League – each using slightly different balls in terms of size and weight.

What Factors Can Affect The Weight of a Football?

The two main aspects of footballs used in all the above sports that we should consider is whether the ball is wet or dry and how much air is in the football.

With the advent of more modern techniques of keeping footballs more resistant to water absorption, footballs used in this modern age will rarely be a lot heavier due to a wet playing surface.

Does the Weight of a Football Matter?

In short, yes! Football players used to specialising in particular types of free kicks in soccer or game manoeuvres in other football-based sports will rely heavily on the ball being the standard weight.

Indeed, a football turning out to be lighter or heavier than the norm is often bad news for the player with it.

Shots or throws that the player wishes to achieve will be compromised leading to failed attempts at goals or accurate passes to teammates.

Do Footballs Used in Amateur Competition Differ in Weight?

In some cases, yes. Apart from governing-body sanctioned footballs being made predominantly of leather, some footballs used in non-league competition, in particular by minor league teams will be made of lighter materials, or at least the casing will be.

The incorporation of rubber or plastic materials in the construction of footballs for organised games as well as leisurely kickabouts is often due to financial reasons.

Cheaper rubber versions of footballs used in indoor football matches are a good solution for youth-activity organizations with limited funds.