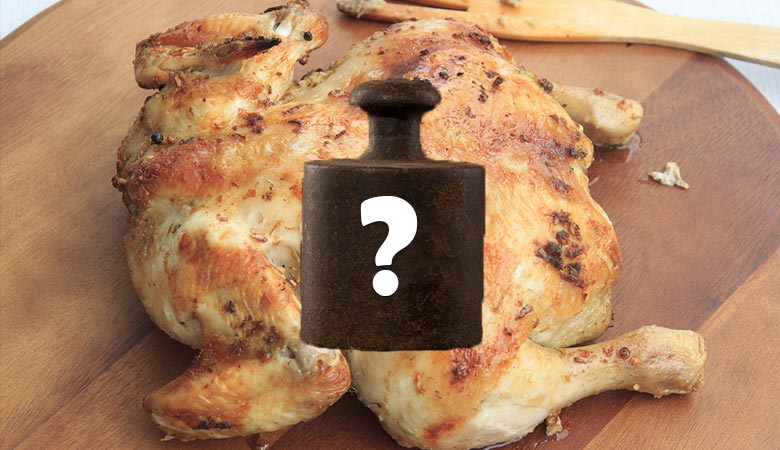 If you came here for a simple answer, here it is.

Alright, time for the details. Below we will discuss many of the different factors that contribute to the weight of a chicken. As well as giving you what you came here for: the numbers.

We’ll start off with the chicken that you see the most often. The one in the frozen foods section at the grocery store.

The Cornish Cross Broiler is the most popular chicken for the commercial meat market.  They reach an average of 6 pounds (just under 3 kg) in a quick 4-6 weeks. Keep in mind that this is the weight when the bird is whole. The weight in the grocery store will be lighter.

They are so popular because of how fast they grow. Some may grow heavier, but most don’t get to live much longer than that.

The Golden Comet hybrid hen is the most popular for egg laying operations. The rooster can weigh up to 6 pounds (2.7 kg’s) and the hen usually comes in at 4 pounds (1.8 kg’s).

What many people don’t know is that not all chickens lay eggs. While others, like the Golden Comet, lay upwards of 280-330 eggs a year.

The Rhode Island Red is a true overachiever. Weighing in at 6.5-8.5 pounds (3-4 kg’s) depending on their gender, they are raised for both their eggs and meat. The hens are said to lay 200-300 eggs a year.

The Serama from Malaysia takes the lightest title. Most often weighing in at a mere 1 pound (500 grams) with some individuals only reaching half that.

Bantams is the term commonly used for small chicken breeds and they usually weigh between 1 and 2.5 pounds (0.5-1 kg).

Are chickens born? Or just hatched? That’s a question that this post won’t answer. What this point will answer is that the average chick today weighs only 1.5 ounces or 44 grams.

Have they always weighed the same?

Chickens are bred most often for either egg production or for meat. As you might imagine, this factor influences the weight of the particular breed. And for a number of reasons, including selective breeding, chickens have become much heavier.

Why has it changed so much?

So what does this mean for the weight of a chicken? Well as you might have guessed, breeders have been selectively breeding the biggest chickens since about the 1920’s. This means that the chickens we have today are A LOT heavier than the chickens in the 20’s. Selective breeding isn’t the only reason that chickens have gotten bigger. Other reasons include:

So not only are chickens bigger now, they are also healthier. Which means they grow faster. There is some debate about whether or not steroids and hormones are added to chickens to increase their size. So you have to choose who you believe in that argument.

So what are the differences?

In 1957 a hatchling weighed 34 grams. Today that hatchling weighs 44 grams. On top of that, in 1957 the hatchling was 4x more likely to die in its first 7 days. This is credited to the vaccinations and vet care that chicks receive today.

Here comes the amazing part. At 56 days the 1957 chicken weighed 31 ounces (905 grams) while today’s chicken weighs 148 ounces (4.2 kg’s). That’s an increase of over 364%. Today’s chicken would also be market ready and is big enough to feed 6 people. Whereas the 1957 chicken would still have 12 days before it was market ready and would only feed 2 people. Now that’s an impressive increase.

How about this extra fact. There are more chickens in the world than any other type of bird. A staggering 23.7 billion as of 2018. That’s a lot of chicken wings. And a lot of eggs.

As you can see, chickens of today grow much faster and much bigger than the chickens of 1957. And now you know all the different factors that determine how heavy a chicken is.