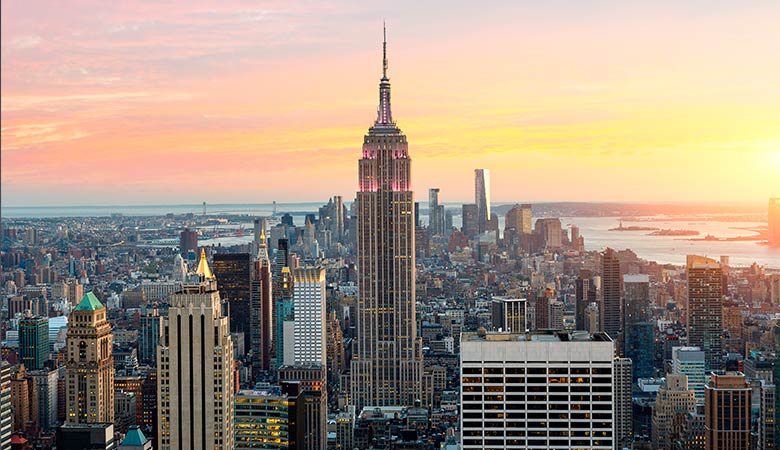 Most people recognize the Empire State Building as one of the most famous attractions in New York City. Between 10,000 and 20,000 individuals visit it every single day, so it makes sense that people would wonder just how it manages to hold up despite the dizzying number of people who visit.

That’s tons of material (literally), but it should help put those scared of heights at ease. Read on to find out all there is to know about the weight of the Empire State building.

The Empire State Building is an eye-catching skyscraper that towers above many other buildings, with a height of 1,454 feet above Midtown Manhattan. This figure is from base to antenna. It’s tall!

The impressive structure of the building consists of the following materials:

The combined weight of just the aluminum and hardened steel frame is 730 tons!

The building has a total of 103 floors, but the public only gets access to floors 86 and 102, which allows them to get breath-taking views of New York City and beyond. There is a way to access the 103rd floor, but you typically need to be a VIP or a celebrity to get in—the other floors of the building are home to several different businesses.

The Empire State Building takes up 79,288 square feet on the ground. The building includes 2.7 million square feet of office space and houses several different companies, each with its own staff.

The construction of the building kicked off on March 17, 1930, and was officially completed on March 31, 1931. This means it took just one year to complete the building and get ready for the opening parties to celebrate what would become a cornerstone of tourism in Manhattan.

The speed of the construction process made it the fastest construction in history for a project of its scale. During the building stage, it grew around 4.5 stories every week. This is very impressive when you consider how quickly the building was erected, but it was crafted with durable materials to ensure it stood the test of time.

The construction process brought many workers to New York City and was seen as a much-needed reprieve following the Great Depression, which found several people without work for a long time.  Workers logged as much as 7 million working hours on the project. Given the scale of the project, there was much interest from people in the construction industry.

According to “The Empire State Building” by Jennifer Rosenberg, the building was only anticipated to have 80 floors, but the numbers kept rising throughout the process because of the desire to make it the highest standing building in the world at the time.

Such a project was taxing for everyone involved because there was a lot of money involved. The building cost just under $41 million to construct. (Source: Soft Schools) That figure was huge at the time, and many investors were missing out for quite a while until the building started to generate a profit. Some people think it should have cost twice as much to make, but the Great Depression drove costs of construction down.

Ultimately, the Empire State Building did not generate a profit until 1950. That’s around nine years without a profit for all of the people involved. It was a risk for investors, but it was a risk that paid off for the ones who held on until they got a profit.

To put it into perspective, according to “How Much Would it Cost Today to Rebuild New York’s Most Famous Landmarks” by Sabrina Grandke stated that to build the Empire State Building in 2012 would have cost around $2.5 billion. However, this figure seems to be a conversion of how much money was worth back then, as opposed to the demand for the materials.

It’s hard to imagine the building ever losing favor with the people of America and beyond, especially when you consider that it was named the favorite building of the country in a poll by the American Institute of Architects (Source: Bloomberg). The building has a legacy that will keep it as one of the most exciting tourist attractions in the world.

Why Hasn’t it Collapsed?

If you worry about buildings falling, then there’s a good chance you’ll worry about the Empire State Building falling. It’s gigantic, and given the how tall and heavy it is, you would think that it wouldn’t take much to topple it.

That couldn’t be further from the truth, though. According to CNN, a small plane crashed into the building in 1945, and the integrity of the structure remained stable. There was some fire in the aftermath and 14 deaths, but given that the building can host 13,500 people at any one time, it shows that the structure is reliable and can withstand anything thrown at it.

Will the Empire State Building be Around for the Years to Come?

The building materials alone should keep the building thriving. Despite their weight, these materials are robust, so the building was built to last. Indiana limestone and granite have both been used for other high-profile structures around the world.

The beauty of a structure like the Empire State Building is that it adapts with the time. It signed a deal to become New York City’s largest commercial purchaser of renewable energy. (Source: Environment+Energy Leader)

A building of this caliber burns through lots of electricity and gas. People are more conscious now than ever of renewable energy, so making such moves implies the people managing the building are eager to keep the building in good standing with everyone.

Typically, there are long lines of visitors outside the building who are looking to get a good view of the city and surrounding areas, but the wait in queue depends on the season. The people who work there get access to different elevators than the public, but it doesn’t stop the building from being one of the busiest there is.

The Empire State Building may seem dauntingly tall to many people, but it has some of the best materials on the planet keeping it standing. There is also regular maintenance so that if anyone has concerns, they can address them before they become a significant issue.

Given that it’s been talked about since it popped up 89 years ago, its popularity is showing no signs of slowing down and should remain a popular tourist attraction for the decades to come.

It’s a testament to the durable materials that it was built with almost a century ago and is still proving to show high resilience, even in the face of weather that is worsening. There are no plans for the building to close, and it is continuing to thrive.